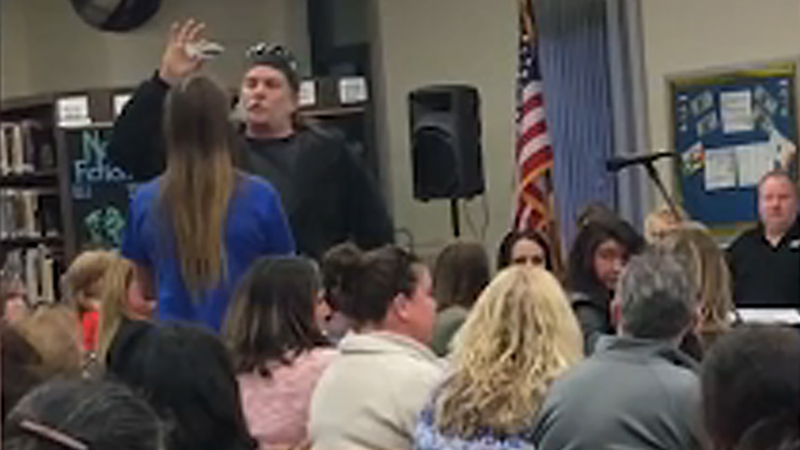 ROCKY POINT, Long Island (WABC) -- Some parents on Long Island are outraged after another parent pulled out a pocket knife during a school safety meeting.

The father was apparently trying to make a point about what would happen in the event of an attack, but many say it was out of line.

Moments after student Jade Pinkenburg voiced his opinion that he didn't want officers in his school to be armed, a parent making an opposing argument used a closed pocket knife to target Jade.

"What are you going to do now?" he asked. "What happens if I decided to attack?"

It happened during a public health and safety committee meeting at Rocky Point High School.

"It really came as a shock," Pinkenburg said. "It was scary. I didn't know what he was going to do with it."

"I started charging at him to stop," Chris Pinkenburg said. "There was no intention to harm my son, but he was treating my son like an object."

School leaders responded to the events unfolding saying, "While the district firmly acknowledges that the demonstration was ill-conceived and inappropriate for the venue, we believe that the act was not intended to compromise the safety of those in attendance."

The man, identified as a dad of two students in the district, was asked to leave the meeting. And while many disagree with his decision and demeanor, some feel it was an overreaction.

"It was a tough love movement to teach a lesson to drive a point home," parent Jeff Carlson said. "Drove home the point to the rest of the adults in the room, and at no point felt threatened."