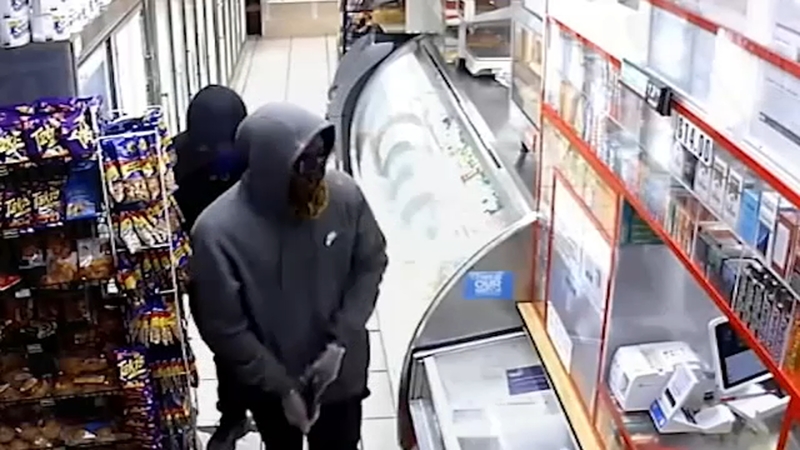 NEW YORK (WABC) -- Police have connected the suspects in a string of armed robberies across the city to two more incidents.

In all, the two men are connected to eight armed robberies targeting stores in three boroughs during overnight hours. They have entered delis, dry cleaners and a 7 Eleven, holding up the clerks and demanding cash.

The first robbery happened on September 18 at 10:33 p.m. at the Essa Deli and Grocery Corp. on Barnes Avenue. They got away with $900.

The following day at 10:50 p.m., police say they struck again at the Community Deli Food Market on Carpenter Avenue.

The two suspects are accused in a fourth robbery on September 28 at 11:59 p.m. at the 73 Food Market Corp. on Decatur Street.

Just a few hours later, they robbed a 7-Eleven at that same location.

An hour after that, they hit the Sun Gourmet Deli and Grocery store on Watson Avenue. They got away with $1,500. Less than an hour later, they entered a dry cleaners.

"They say somebody came in the morning with a gun," said Rose Medina, who owns a salon across the street. "They don't point it at him, they showed him the gun. He said take whatever you want."

The men also allegedly robbed the 7-Eleven on Graham Street in Williamsburg, also on the morning of September 29, when they stole $2,000 and cigarettes.

In each of the incidents, police say the men have had their heads and faces covered. So far all of the store clerks have willingly handed over the cash in the drawer, rather than put up a fight and possibly put their lives in jeopardy.