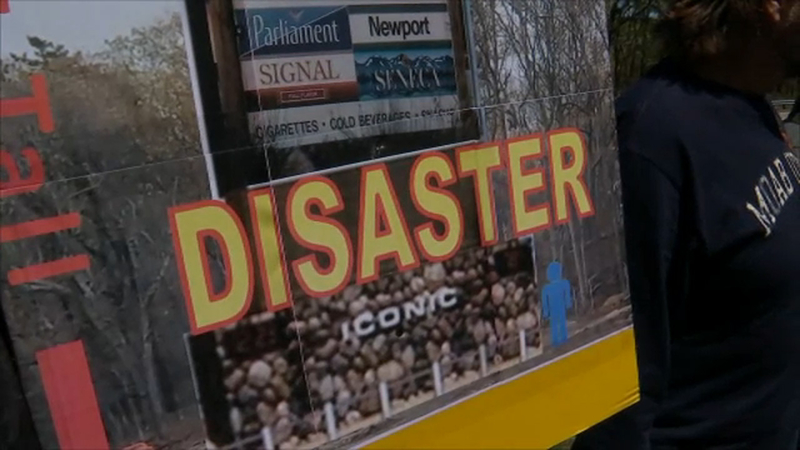 "These are Las Vegas type billboards or Times Square type billboards that are going to be seen for miles," said Maria Hults, President of the Hampton Bays Civic Association.

The billboards will be situated on the eastbound and westbound sides of Sunrise Highway around exit 66. They will have electronic displays on both sides.

"The brightness of the light, you won't be able to see the stars anymore," said Susan von Freddi, with the Hampton Bays Beautification Association. "It's going to harm the animals in the woods here."

However, according to a spokesperson for Congressman Lee Zeldin, the U.S. Bureau of Indian Affairs has found no records of the land being held in trust. If the land is not in trust, the state can enforce federal regulations, which, under the Highway Beautification Act, ban these types of billboards on certain roadways.

"It's now up to the NYSDOT to determine if there was a violation of federal highway law and, if so, it's up to them and the New York Attorney General to enforce it," Zeldin spokeswoman Katie Vincentz said.

A spokesperson for the New York State Department of Transportation said the matter is still under review.

Southampton Town Supervisor Jay Schneiderman said he has been in regular contact with the tribal council leader.

Eyewitness News reached out to the Shinnecock Indian Nation several times Wednesday, but our phone calls were not returned.

The Hampton Bays Civic Association is hosting a meeting with the tribal council leader Monday night to discuss the billboards.

"We're hoping that maybe we can come to have some conversation together and try to come up with perhaps a compromise," von Freddi said.