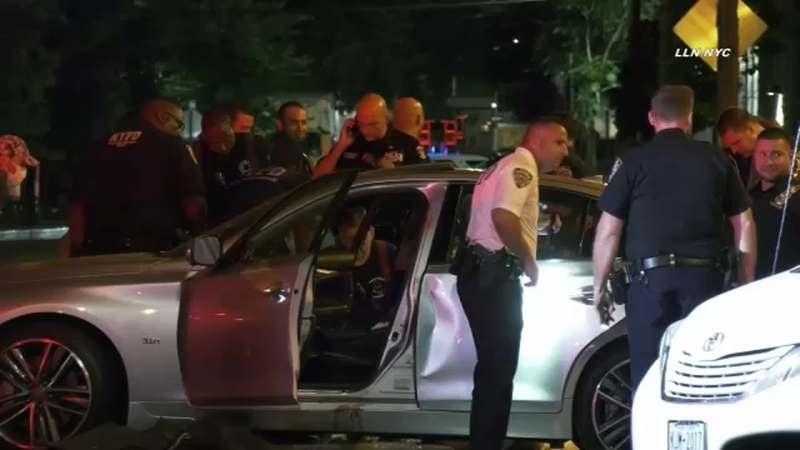 EAST NEW YORK, Brooklyn (WABC) -- Two people were killed and three others wounded in a pair of shootings near a party in Brooklyn early Sunday, and police are trying to determine if they are connected.

The shootings happened just minutes apart around 12:30 a.m. near the party on Wortman Avenue in East New York.

Arriving officers found three people shot inside a silver Infiniti sedan at the corner of Georgia and Wortman avenues.

Novada Bailey, 36, suffered gunshot wounds to his face, chest and arm was transported to NYC Health + Hospitals/Kings County, where he was pronounced dead.

Nicholas Palmer, 36, suffered a gunshot wound to the head was rushed to Brookdale Hospital, where he was pronounced deceased.

A 51-year-old man with gunshot wounds to his right forearm, upper back and chest was taken to Brookdale Hospital, where he is listed in critical condition.

One eyewitness described a chaotic scene as he says the Infiniti crashed during the shooting.

"People were rushing to get out when they heard the gunshots," the witness said.

Separately, two others were shot inside Brooklyn Garden Event Space on Wortman Avenue.

A 37-year-old man was shot in the right shoulder was taken via private means to Montefiore Hospital in New Rochelle, where he is listed in stable condition.

The final victim, a 32-year-old man, was wounded in the chest and neck and went to Brookdale Hospital, where he is listed in critical condition.

ALSO READ | Lambda and delta plus: What to know about other COVID variants detected in US
EMBED More News Videos

There are no arrests at this time, and the investigation is ongoing.

It is unclear at this time if all the victims were targeted.