Small plane crashes into lawn of home on Long Island, all survive

WABC
By Eyewitness News
VALLEY STREAM, Long Island (WABC) -- A small plane crashed into the front lawn of a home on Long Island, and amazingly, everyone walked away without serious injuries.

The three people who were on the plane were sitting on the curb across the street when police arrived on scene. One of the passengers suffered a sprained finger.

Officials say the passengers on the plane -- 29-year-old Hongjoo Na and 26-year-old Jumwoo Jung -- were visiting from Korea. They spent some time at Niagara Falls, and the pilot, 27-year-old Dongil Kim, of Queens, was attempting to land at Republic Airport in Farmingdale but became disoriented and missed each time due to dense fog.

They were then redirected to JFK Airport, where they missed the runway twice.
EMBED More News Videos

NJ Burkett has the latest on the plane that crashed into lawn of home on Long Island.

The plane was reportedly low on fuel and clipped the rooftop of the church on the corner of Clarendon Road, then got caught in overhead wires at 113 Clarendon Drive.

Homeowner Gui Ismael said he was in his basement watching basketball when he heard a loud bang.

"I heard a big explosion," he said. "I was like, what was that? I called my wife and I called my son, are you guys, are you OK?"

Ismael said he opened up his front door and saw the plane hanging by the power lines in his front yard.

Ismael said that's when he heard another loud explosion, and he shut his front door.

The owner of the plane, Robert Corona, told Eyewitness News reporter Kristin Thorne he's very upset about what happened but is glad everyone is OK.

According to the FAA, the pilot has a commercial pilot license.

Eyewitness News went to the Danny Waizman Flight School and Aircraft Rental based out of Republic Airport, where Kim rented the plane, but no one wanted to speak with us.

Officials say there were no injuries on the ground, and there is no structural damage to any houses.

PSEG repaired the power pole and restored power to a dozen homes that had been affected.

The FAA released a statement saying, "A Cessna 172 aircraft crashed into some power lines in a residential neighborhood approximately two mile northeast of John F. Kennedy International Airport in Valley Stream, NY at 10:19 p.m. Three people were on board. Contact local authorities for passenger information and medical conditions. The FAA will investigate." 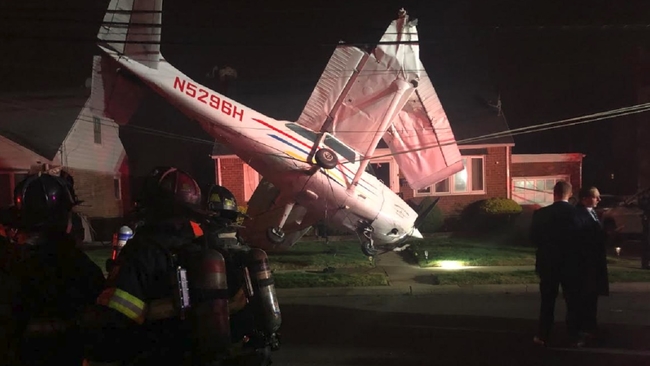