Fight over garbage is stewing on the Lower East Side 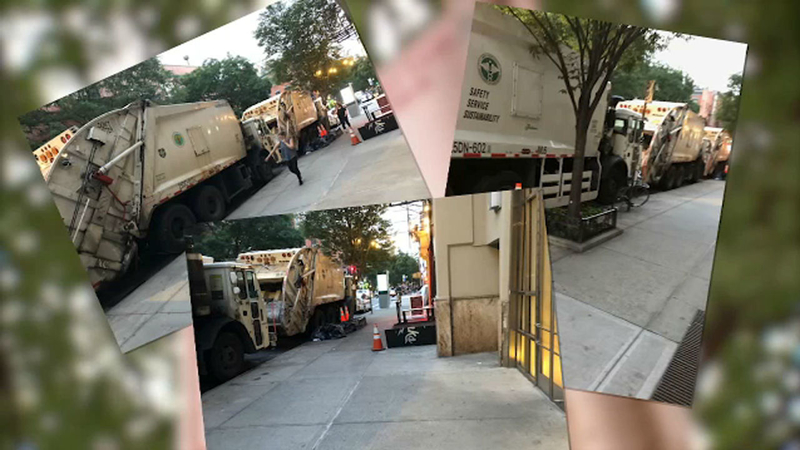 Fight over garbage is stewing on the Lower East Side

LOWER EAST SIDE, Manhattan (WABC) -- Late Wednesday, Mayor Bill de Blasio promised to look into complaints from residents and business owners on the Lower East Side that garbage trucks have taken over their street, bringing with them foul odors, loud noises, eyesores and the threat of rodents and pests.

Residents on East 10th Street between 1st and 2nd avenues said the trucks moved in earlier this month after designating a chunk of the once-open street parking for "authorized vehicles only."

Pink's Restaurant and Bar owner Avi Burn said his business has dropped by about 40 percent since the trucks moved in.

"It really stinks," Burn said. "It's not like a garbage smell. It's like a really deep smell. You can't even be around it."

Burn added that the trucks block any street appeal his restaurant once had and are very loud.

"We have all of a sudden become a destination type of a venue," Burn said. "How else are we supposed to feel? We feel sort of abandoned by our own city."

Residents in nearby condos have also complained.

David Arbuthnot said a petition asking the city to relocate the trucks has gained around 200 signatures in a matter of days.

"They're targeting our neighborhood unfairly because they feel like they can just get away with it," Arbuthnot said.

The District Manager for Community Board 3, Susan Stetzer, said in 14 years she has never received so many complaints about a single issue.

"There were times yesterday every person in this office was on a phone call with somebody about this," Stetzer said.

For years, the sanitation trucks had parked in a garage on the other side of Manhattan at 606 West 30th Street, according to a Sanitation Department spokesperson.

The city recently lost that lease and failed to find an alternative garage despite what that spokesperson described as an extensive search.

As a result, the Sanitation Department decided to park 21 trucks at locations on the East Side near sanitation stations where workers are dispatched.

The three locations are 10th Street between 1st and 2nd Avenues where Pink's is located, as well as Mt. Carmel Place between 26th and 27th Streets and York Avenue between 59th and 60th Streets.

Eyewitness News asked why the city hadn't chosen a more industrial area further away from residences to park their vehicles.

Sanitation Department Spokesperson Dina Montes responded in a statement, "We need to have trucks close to the communities they serve, especially during snow season when our trucks are used as snow plows to clear the streets. Having our trucks in an area far from the district would add to delays in service, which could turn into a nightmare for emergency vehicles..."

Stetzer said relocating the vehicles during emergency events is different than parking the vehicles on streets with residences and small businesses indefinitely. Stetzer said she was told the trucks would likely be on the streets at least a year and possibly longer.

"We are not going to bring foot traffic and improve our economy by having garbage trucks parked on our side streets," Stetzer said. "We are supposed to be protecting our small mom and pop shops. Who is going to go to a business surrounded by garbage trucks?"

"It's the same type of space problem we are having all over New York City, and in some cases, we need more space and new space," de Blasio said. "I will talk to the Commissioner and see what we can do to alleviate the immediate pressure. We certainly do not want those residential areas to feel the burden."

Burn said he hopes the mayor does follow through and pushes the Commissioner to find an alternative solution until the city secures a new garage.

If not, Burn worries the current situation could put him out of business.

"If something doesn't change, it's going to be problematic," Burn said.

Stetzer said she would also be imploring the city to make a change.

Residents and businesses further voiced their concerns during a CB3 meeting Wednesday at PS20 located at 166 Essex Street, according to the CB3 calendar.

DO YOU NEED A STORY INVESTIGATED? Jim Hoffer, Danielle Leigh and the 7 On Your Side Investigates team at Eyewitness News want to hear from you! Call our confidential tip line 1-877-TIP-NEWS (847-6397) or fill out the form BELOW. You can also contact Jim and Danielle directly: Jim Hoffer: Email your questions, issues, or story ideas to 7OnYourSideJim@abc.com Facebook: facebook.com/jimhoffer.wabc Twitter: @NYCinvestigates Danielle Leigh Email your questions, issues, or story ideas to 7OnYourSideDanielle@abc.com Facebook: DanielleLeighJournalist Twttier: @DanielleNLeigh If using the app, click here to send us a news tip
Report a correction or typo
Related topics:
societylower east sidemanhattannew york citygarbage7 on your side investigationsanitation worker
Copyright © 2021 WABC-TV. All Rights Reserved.
More Videos
From CNN Newsource affiliates
TOP STORIES