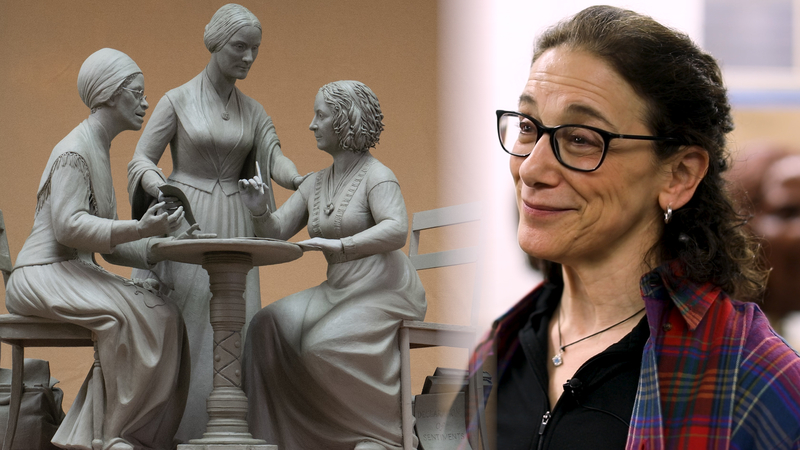 "After seven long years, Monumental Women is thrilled to break the bronze ceiling and share the unveiling of our Women's Rights Pioneers Monument - the first statue of real women in Central Park - with the world via live-stream," said Pam Elam, President of Monumental Women. "The unveiling will feature several special guests who have supported this project and offer viewers an opportunity to experience the historic event safely from home during this pandemic," said Pam Elam, President of Monumental Women.

Central Park has more than 800 acres that hold so much history. There are more than 20 sculptures, but not one depicts an actual woman -- until now.

Of the 23 statues of historical figures in the 840-acre, 166-year-old public park, none honors actual women. There are statues of three female fictional characters: Alice in Wonderland, Mother Goose, and William Shakespeare's Juliet, who appears with Romeo.
EMBED More News Videos

"These three women were very important to the stature, the rights, the citizenship that we as women enjoy today," said Bergmann.

For over 40 years, Bergmann has been making sculpture that deals with complex themes in an accessible, beautiful, and provocative way. Working within the tradition of narrative sculpture, she draws on her love of the history of art, literature, and mythology to make the past speak to the present.

"A lot of statuary just shows a figure standing, and that has never interested me... I want to tell a story, I want to show a moment," said Bergmann.

Bergmann's vision for the sculpture, chosen from 91 submissions, features the three women sitting at a table - maybe hammering out a speech or working on a piece of legislation - Bergmann wants it to be up to the viewer to interpret. While honoring their specific efforts on behalf of women's suffrage, women's civil rights, and the abolition of slavery, Bergmann hopes her latest work will also make a statement about the need to recognize the contributions of women.

"I want the piece to be in-depth, so as you pass it day after day or visit it once a year, there is more to discover," said Bergmann. "There is detail hidden everywhere in the sculpture and a lot of it has meaning."
EMBED More News Videos

Michelle Charlesworth reports on the first statue of real-life women in Central Park.

The statue was conceived, created, and funded by Monumental Women, an all-volunteer led non-profit made up of women's rights advocates, historians, and community leaders.

Monumental Women began working to develop the statue and secure a prominent location on Central Park's famed Literary Walk in 2014. The organization raised over $1.5 million in private funding to pay for the statue.

Monumental Women is hoping to increase awareness and appreciation of women's history through a nationwide education campaign. Monumental Women's next project is the creation of a New York City Women's Rights Trail throughout all five boroughs.

The statue is located in Central Park and, because of the work of Monumental Women, will be the first statue depicting real women in the park's 167-year history.

The statue has the support of local community boards, community, and government leaders, including Manhattan Borough President, Gale Brewer, who has been a leading advocate for the approval of the statue, and countless other individuals, foundations, and organizations in New York City and across the country.

"I've been a professional sculptor for 40 years, so it's quite a wonderful thing to be doing this project," said Bergmann.

The statue was unveiled to the public on August 26, 2020, on the 100th anniversary of the ratification of the 19th Amendment, when American women won the right to vote.
Report a correction or typo
Related topics:
societynew york citymanhattancentral parknew yorkinternational women's dayin our backyardarts & culturesculpturecentral parkwomenarthistoryhuman rightscommunityequal rightscultureoriginals
Copyright © 2021 WABC-TV. All Rights Reserved.
More Videos
From CNN Newsource affiliates
TOP STORIES