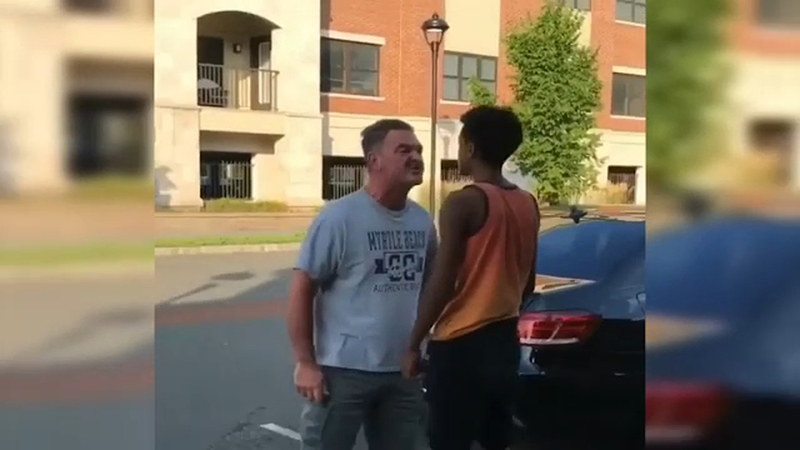 Heated exchange between former cop and teen caught on camera

FAIR LAWN, New Jersey (WABC) -- A heated exchange on a New Jersey street between a man who identified himself as a retired law enforcement officer and a teenager was caught on camera.

The man seen in the encounter told the teen he was a captain with the Passaic County Sheriff's Department.

The incident took place Sunday in Fair Lawn, where a group of teens were riding their bicycles near the Promenade.

The man flashed his badge during a verbal exchange that included foul language and a lot of shouting.

But the retired officer's girlfriend wanted to clear the record, saying she thought his response was appropriate in light of what happened before the cameras began rolling.

"Cars were honking at them, they were cursing and then they started riding their bicycles around me in a circle," said Judith Ruben.

She says while walking her dog, the teens screamed some nasty profanity in her direction, even using terms that many consider racist.

"Calling me a cracker, insulting me, that I'm a woman," she said.

Ruben left but said the group followed her until they came to the circle outside her building, where one of the teens fell off the bike. That's when she called 911 for help.

"He sees me on the phone and in my opinion he thought I was calling the cops on them because this is a group of kids, cops are called about them all the time," said Ruben.

A Fair Lawn cop did respond and is in the video watching as the former cop and teen are shouting at each other. There was no physical contact.

"I believe the officer on duty should have stopped it and prevented it. Instead at the end he let everything unfold," said community activist Zellie Thomas.

One witness was shocked at how the incident escalated.

"I was actually speechless, the fact that he walked up to him the way he did and told him 'I'll break you into pieces', and was throwing his badge in his face," said the witness, Liz Beth Perdomo. "Like, what does that have to do with anything. He shouldn't have been speaking to kids like that."

The screaming and comments may be disturbing but Judith Ruben stands by her boyfriend's response.

"He is sorry that he lost his temper," she said. "It's very upsetting for adults to see teens act like this."

The Fair Lawn mayor's officer says it is investigating the incident. No charges have been filed.