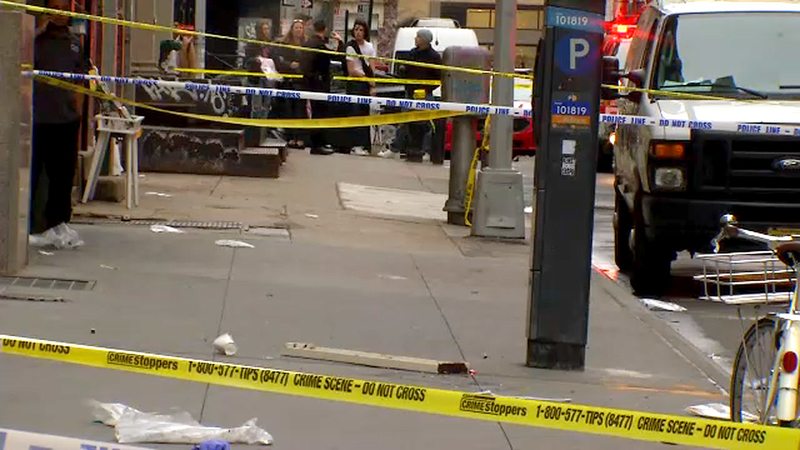 SOHO, Manhattan (WABC) -- A man has died after a piece of a fire escape fell seven stories in Manhattan Friday afternoon.

Two other people were injured in the accident, one seriously, officials said.

58-year-old Richard Marchhart of Garden City was struck by the piece that fell off a building in SoHo.

Marchhart was taken to Bellevue Hospital, where he died from his injuries Saturday.

A 24-year-old female was also struck, but was alert and conscious afterward with a minor laceration to the head, officials said.

The piece of the unusually large fire escape became dislodged when a private inspector, who was checking the building's facade, put her foot on it, authorities said.

"It appears that under her weight, that step became dislodged. She actually fell partially through the fire escape. Thankfully, she was able to pull herself up," said FDNY Assistant Chief Michael Gala Jr.

The fire escape on the building, located near the intersection of Howard Street and Broadway, is now the focus of an investigation.

The sidewalk below was cordoned off to make sure no other pedestrians were injured.

"I asked her what was going on. She said she was walking, and these two people were walking in front of her, and all of a sudden something fell on their head," Kobor said.

While fire officials said the fire escape appeared to be in good condition, buildings officials will investigate.

The private engineer was conducting a routine check of the building's facade. Prior to this, the DOB said it has not received any complaints about the fire escape. A report in 2013 found that it had no unsafe conditions.