Alonso in Miami, Deila in NYCFC, Ramos in Houston and Wicky in Chicago: What to make of this quartet of new MLS coaches 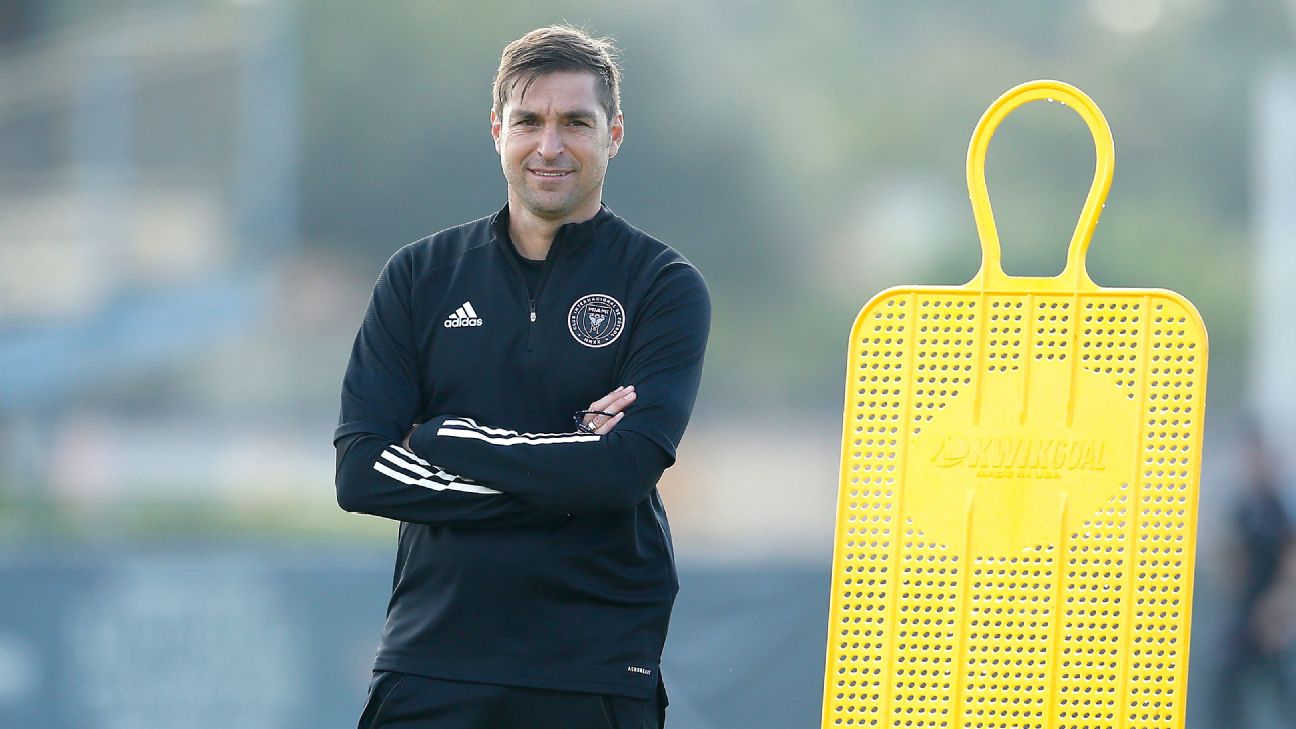 The 2020 MLS season is just around the corner, which naturally means a host of new players in the league. But who cares about those guys? We want to talk about what really matters: the coaches.

We tracked down players who've played for these guys to get a sense of what MLS fans -- and their teams -- can expect from the new guys on the touchline.

What to expect: The first manager of MLS' latest glamour franchise, Alonso's task at Inter Miami may be the toughest he's tackled in some time.

Inter Miami's signing was the biggest name of the four, Alonso having managed Pachuca and Monterrey to CONCACAF Champions League victories and having won Liga MX's 2016 Clausura with Los Tuzos. At his introductory news conference in January, he noted that he's Uruguayan and that Uruguayans are known for fighting and clawing for everything they want. Omar Gonzalez, who played for Alonso at Pachuca, saw this firsthand.

"That's the type of coach he is. High energy, in your face. If he wants more for you, he's going to tell you and he's going to challenge you," Gonzalez said. "He has a passion about him, how he approaches each day. He expects the most out of you each day, and he pushes you with this intensity. It's all because he wants you to be the best you can be. I believe that I am a better player having been coached by him."

- Marshall: Why Pizarro's move to Miami is more important than Chicharito's arrival

- Marshall: Alonso may be just what Inter Miami needs

Kekuta Manneh, who spent 2018 at Pachuca with Alonso, agreed with Gonzalez. "He's very vocal at training and on game days, trying to fire up people and the team," he said. "He's there with the team. He's one of the players who wants to be playing on the field. His passion for the game is something that stands out for me."

Alonso's teams play like Alonso the man: intensely. "He likes to press," Manneh said. "He likes to play off of winning the ball up high and then counter the counter. He loves that. He makes his game plan as he is as a person: aggressive. He likes to attack as quickly as possible and he likes to press the ball as soon as his team loses it. He motivates people to do that on the team." On Gonzalez's 2016 squad, Pachuca boasted Hirving Lozano on the left wing and Jonathan Urretaviscaya on the right, two speedy midfielders. The goal was to get them the ball quickly and break upfield in as few passes as possible, but then maintain possession and enter the box through combination play if the counter wasn't available.

"He will get Miami fired up for the season and players will want to play for him," Manneh said. "He's that type of coach."

Of the four coaches, Alonso has the highest expectations. He's the most decorated new coach in the league (at least as a manager; Henry takes that honor as a player), and Inter Miami is this season's glamour franchise. It's a good roster for an expansion club with high-potential DPs Matias Pellegrini and Rodolfo Pizarro and MLS veterans including Juan Agudelo, A.J. DeLaGarza, Alvas Powell, Luis Robles, Ben SweatandWil Trapp. But it's still an expansion franchise, and growing pains will come. Miami could be quite good. It also might fall short of the playoffs if Alonso can't hold things together. This season will be his toughest test in a while.

What to expect: Deila's even-keeled nature should serve him well in a league with as much parity as MLS and in a club in as much disarray as NYCFC.

The new New York City FC manager enters a bit of an uncertain situation, replacing Domenec Torrent, who left at the end of the 2019 season. The Norwegian previously managed Brodd, Stromsgodset and Celtic before moving to Valerenga in January 2017. The Oslo-based club finished eighth, sixth and 10th in the Eliteserien during his three seasons in charge.

"He prefers possession-based attacking football," said Samuel Adekugbe, a left-back and Canadian national-teamer who started his career as Vancouver Whitecaps homegrown player before joining Valerenga in 2018. "An idealist. He loves winning but even more so when the team plays beautiful football."

Delia tries to maintain a positive attitude in the locker room and during practice. "His training sessions are intense and very tactical," Adekugbe said. "He's all about improving the way the team plays with and without the ball. Repetition of certain movements that he wants to see. He's very diligent in his approach to the game. Recognizing areas of improvement, showing the team through video footage and working on it during training sessions."

When things go wrong, the manager becomes more process orientated, searching for and analyzing patterns in areas of weakness. These qualities should serve him well in the up-and-down world of MLS.

The good news for Deila is that his new club boasts plenty of attacking talent in Valentin Castellanos, Heber, Maxi Moralez and Alexandru Mitria. The bad is that NYCFC is a chaotic place. Witness the strange and awkward departure of Torrent as well as director of football operations Claudio Reyna, and also the troubles of City Football Group flagship Manchester City. Not a recipe for success, especially for a manager who didn't exactly shine in his previous job. There's enough ability and home-field advantage to get NYCFC to the playoffs, but it could be a tough year in the Bronx.

What to expect: Houston is short on star power, but Ramos has the tools to build the foundations of success for years to come.

The longtime U.S. men's national team player who served as the program's U20 head coach from 2011 to 2019 before joining the Dynamo is one of the most experienced American coaches around. Between his 82 international appearances and his stints as U20 assistant, U20 manager and USMNT assistant, he's spent 22 years involved in the U.S. Soccer setup.

For Philadelphia Union defender Matthew Real, who played for Ramos at the 2019 U20 World Cup, that been-there, done-that quality is a key to Ramos' coaching success. "He's been places in the game for sure," he said. "He brings the same things he brought to the field as a player to his players. It helps when you have someone who's been through these experiences. You can't really go much higher.

"He's not afraid to tell you if you're not playing well," Real said. "In games as well. He has no problem taking you off the field. But he does have patience. He's not just going to scream at you. He's going to make sure you understand how he's trying to play. If you can execute, then you're his guy. He doesn't care who you are. You can be the best player or the worst player and he'll treat everyone the same. He'll bench the best player if he's not performing."

As someone who spent a decade molding youth national-teamers, Ramos understands the qualities of each of his players and helps them build out those traits. For Real, that was his leadership. "He always trusted me as a player, trusted my ability, but he saw me as someone who could be a potential leader for the group," he said. "He brought that voice out in me. I knew I had it, but I didn't know I had it like I showed."

Ramos comes in as the most familiar with MLS and its players, having coached some of them as they came through the U.S. youth system. The version of the once-proud Dynamo that he inherits lacks a big-name star, while transitioning from the sporadic nature of a national team coach to the day-to-day rigor of a club manager will be an adjustment. Ramos loves working with younger players and helping them develop, so perhaps 2020 will be a building year in Houston. That said, if he -- and assistant Pablo Mastroeni, known during his playing days for his tenaciousness -- can get the Dynamo battling for each other, they could push for a playoff spot in the tough Western Conference.

What to expect: It's all change in Chicago this season, and if Wicky doesn't get the best out of this reshaped roster, the man in charge of the dugout could change once more this season.

After four years and a single postseason appearance, the Fire finally pulled the plug on Veljko Paunovic, which led them to Wicky, last seen overseeing the U.S. U17 squad to a last-place finish in Group D at the 2019 World Cup. Despite the poor showing, members of that team enjoyed the experience of being coached by the former Swiss international.

Ricardo Pepi, Carrera's teammate at FCD and on the U17 team, saw those qualities as well. "I thought he was going to be very hard on people and expect a lot from a lot of people, but he was actually kind of laid-back," he said. "The biggest thing with him is that he has a lot of patience for the players. He'd give you opportunities to fix what you needed to fix. But when it comes to you messing up too much, he'll tell you what you did wrong and what you need to fix."

In terms of tactics, Wicky's teams play a possession-based game, mixing control and attacking soccer, while also spending more time than usual prepping for what specific opponents do well and how to exploit their weaknesses. Sessions consisted mostly of on-field work, with only a little bit of video prep to show examples.

The biggest thing, however, is that Wicky is a players' coach, the type to keep in contact with his former players and stay abreast of their lives on and off the field. "When he got the Chicago Fire job, I reached out to him, he reached out to me," Carrera said. "We talked a little bit about how I was doing, how my family was doing, how he was doing.

"Of course, I would love to beat him."

The Fire were better than anyone gave them credit for last season -- advanced metrics loved them -- but the Windy City club lost big names including Bastian Schweinsteiger, Nemanja Nikolic, Nicolás Gaitan, Aleksandar Kataiand Dax McCarty in the offseason. This was intentional, a rebuild to go along with the rebrand, but it does leave a lot of question marks for Wicky. Additionally, the new coach's U17 team looked to lack a bit of heart and fight at the U17 World Cup. Perhaps that means nothing. Perhaps it doesn't. MLS is a long, hard season, and if Wicky can't keep his charges motivated, his seat could get hot quickly. 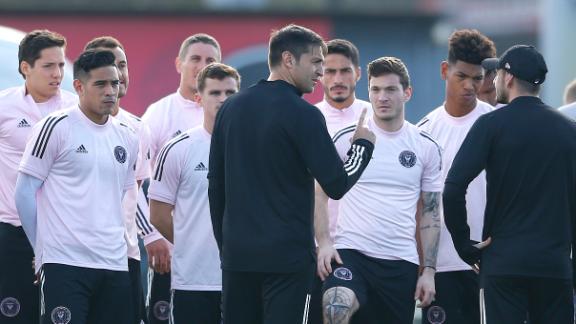