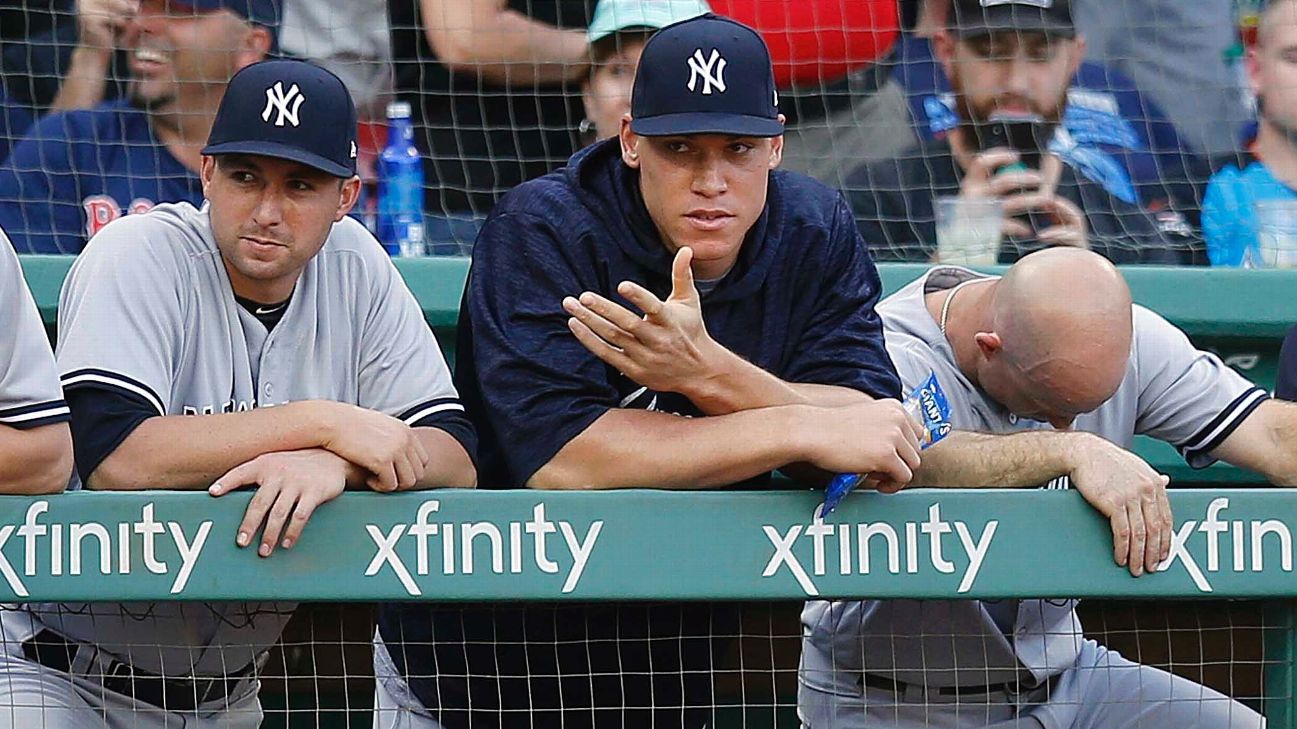 NEW YORK -- As his injured wrist continues healing slower than doctors originally thought, Yankees right fielder Aaron Judge said Thursday that he hates still being away from the field and out of the lineup.

The outfielder has been out of action for exactly three weeks. He suffered a chip fracture in his right wrist when a 94 mph fastball hit him July 26.

Hours after Judge suffered the injury, the Yankees announced an approximate three-week recovery period. On Wednesday, general manager Brian Cashman told WFAN 101.9 FM's Mike Francesa that timeline may have been a bit too optimistic.

"We thought maybe three weeks would cover it, but it's going to be longer than that," Cashman said. "So we missed on the time frame."

"It's something they said that I might have to do at some point," Judge said. "But we didn't want to rush into doing the shot. We wanted to see how it would heal up and how everything would feel without it."

Judge said the shot was injected as he's "just kind of getting over the hump" in this later stage of his recovery.

Across parts of the past two weeks, Judge has slowly eased into baseball activities. Before Wednesday's game at Yankee Stadium against the Tampa Bay Rays, he was running bases and reading fly balls and ground balls in right field. With his right hand, he was throwing the balls he fielded back toward a bucket that was positioned near him in the outfield. After that, he took a few swings under water without a bat.

He still has yet to swing on dry land with a bat in his hands.

"I would say [Wednesday] was a big step forward for him in some of the things he was able to do," Yankees manager Aaron Boone said. "So hopefully bat in hand soon to follow, and then we can progress pretty quickly from there, I would imagine."

Judge, who spoke to reporters as the sound of the late Aretha Franklin's voice echoed through speakers in the Yankees' clubhouse, said the cortisone shot had been helping his wrist. Judge had turned on a Franklin playlist minutes after learning of her death as he drove to the ballpark Thursday morning. Judge said his mother was a big fan of the singer.

Until he can get back on the field, Judge is trying to remain patient.

"I've got a broken bone. It's still fractured. I've got to give it time to heal," he said. "Just got to make sure I'm 100 percent before I got back out there because I don't want to have a setback."

In the meantime, he will continue his role as cheerleader.

"I've just got to keep myself busy during the games and try to do anything I can to help the team," Judge said. "Even though I'm not out there playing, I want to try to do stuff to help the team win, if that's either talking to a guy, motivating a guy or saying a little something, pick someone up, just trying to keep myself busy."
Report a correction or typo
Related topics:
sportsespnaaron judgemlbnew york yankeesrecoverywrist
Copyright © 2021 ESPN Internet Ventures. All rights reserved.
TOP STORIES
COVID Updates: Full FDA approval for Pfizer vax could come in weeks
NYC to require proof of vaccine for indoor events, activities
NOAA updates Atlantic hurricane season forecast
Cuomo investigation: What we know and what's next
4 NY DAs request materials in possible Cuomo criminal probe
Marist poll: Majority thinks Cuomo should resign, protests ongoing
China seals city as its worst COVID outbreak in a year grows
Show More
Search for attacker who pushed man onto subway tracks in Bronx
2 dead in horrific crash between car and tractor trailer
450,000 bees found inside walls of home
Officers, bystanders who lifted car off mom, baby honored in NY
New details revealed in crash that killed 4 family members
More TOP STORIES News