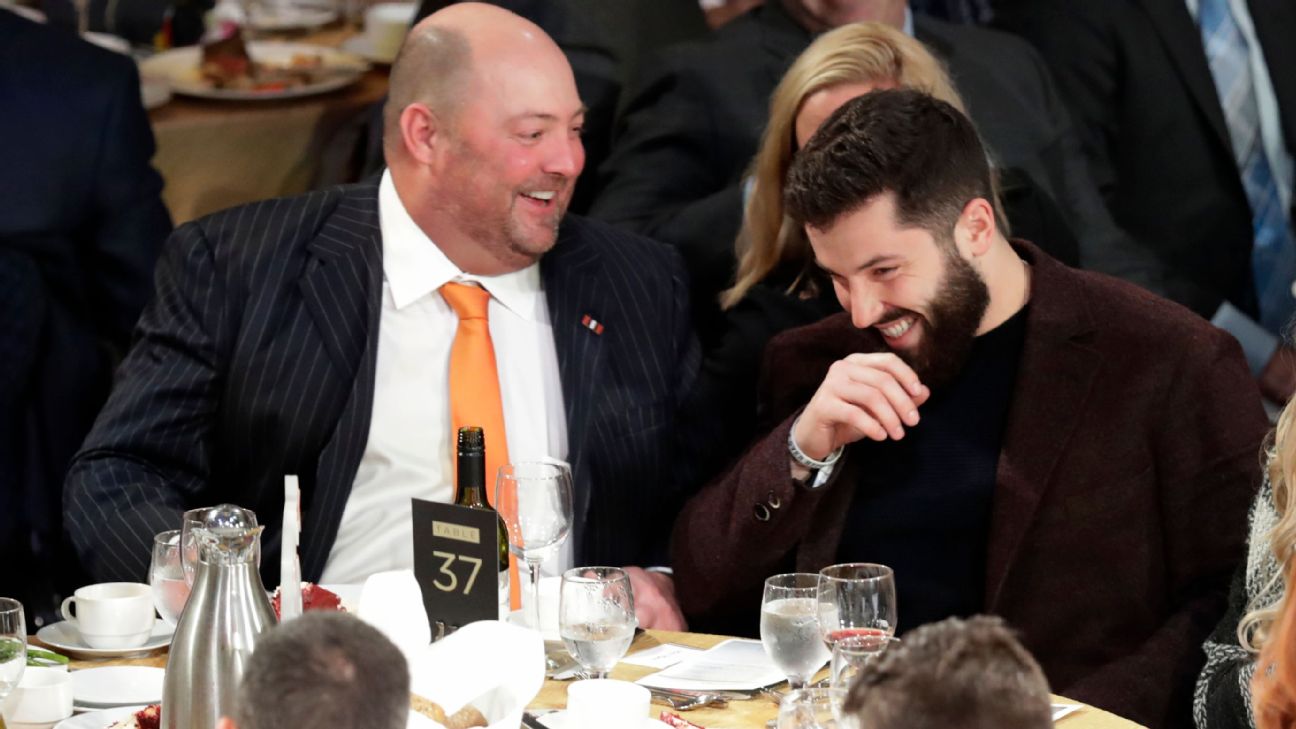 CLEVELAND -- He may have taken home Professional Athlete of the Year honors at the Cleveland Sports Awards on Wednesday night, but Cleveland Browns quarterback Baker Mayfield acknowledged that losing out on NFL Offensive Rookie of the Year to New York Giants running back Saquon Barkley will serve as a motivating force.

"I'll use it as motivation, but the more important thing is winning football games," Mayfield said.

The two players are good friends, so Mayfield smiled when asked if Barkley had already used his bragging rights.

"Yeah, he has," Mayfield said. "But we're not going to get into the detail yet."

Mayfield and Barkley had a friendly wager on the honor, so now Mayfield has to buy Barkley a chain. Even there he lapsed into a barb, poking fun at Barkley's muscular quadriceps.

"It'll say 'Quads' on it," Mayfield said. "Not 'Sa-quads' but just 'Quads.' The two extra letters in there cost a little bit extra money, so we'll stick with just 'Quads.'"

The rivalry and competition are clearly friendly.

"Yeah, it's more frustrating than anything because Saquon, that's my guy, and he'll hold it over my head forever," Mayfield said. "But you know what, I'll use that as motivation, and I'll be better in the long run."

Mayfield was in town after spending the week at the Super Bowl in Atlanta. He spent time during the week at the Browns' facility meeting with his new offensive coaches, including coordinator Todd Monken. He was joined at the banquet by his fiancée, Emily Wilkinson, whom he will wed in July.

Mayfield has talked about the importance of taking time away from the game, but said he will soon return to the gym -- just not with a quarterback specialist.

"No, I'm not going to have any guy swiping a broom at my feet in the ocean, that type of quarterback training," he said. "I don't believe in that. I'll go to a normal gym where I trained last year. I don't need some guy to try and teach me how to throw. I'll have a guy that pushes me in workouts. Has other athletes in there. The intensity's up. It's a working environment."

Mayfield also spoke about his appearance in the NFL 100 commercial that aired during Super Bowl LIII -- noting that New England Patriots quarterback Tom Brady did not use props when he told Mayfield to hold his championship rings.

"Those were the real rings," Mayfield said Wednesday. "They are heavy."

Mayfield was one of several present-day NFL stars to join all-time greats commemorating the NFL's upcoming 100th anniversary. In the madcap video, Brady goes to join in banquet room football and gives his rings to Mayfield, who was seated next to him.