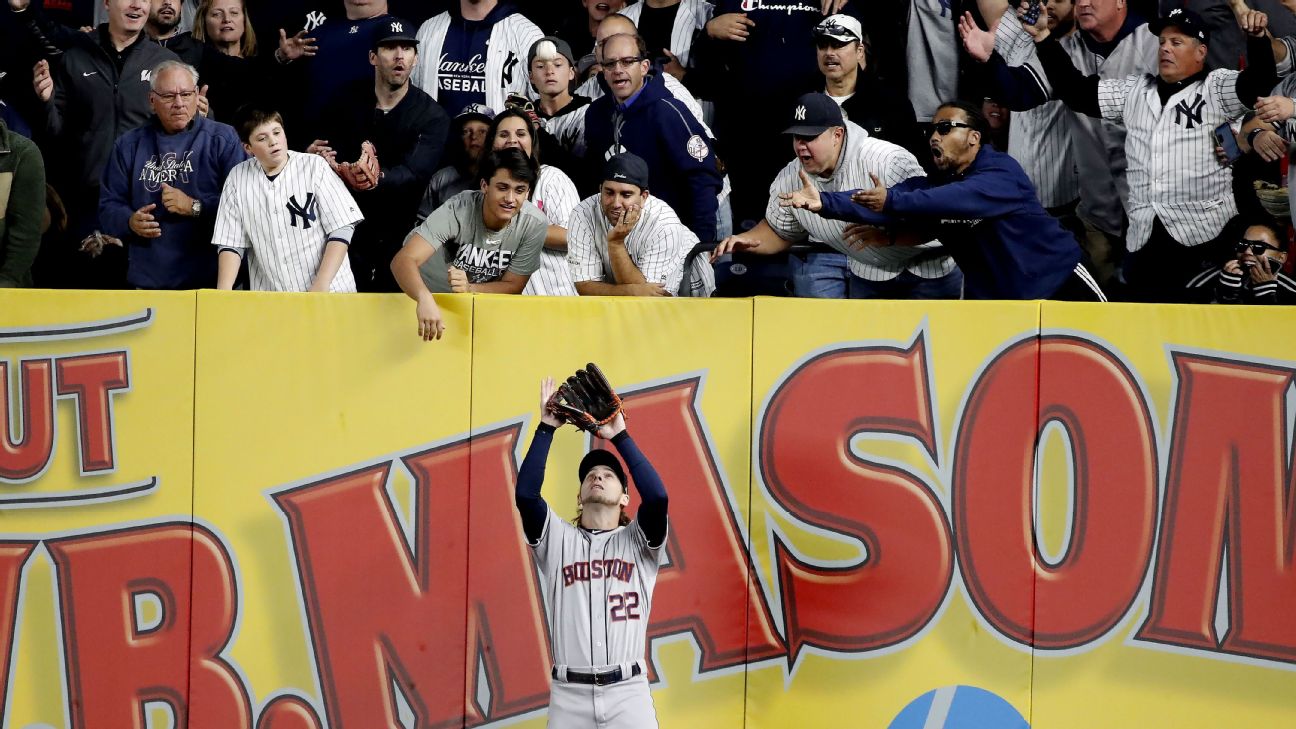 NEW YORK -- The biggest story this year in Major League Baseball wasn't a player, a manager, a general manager, an incredible play or a historic game. It was a five-ounce-heavy, nine-inch-round orb that birthed conspiracy theories, broke records, spurred incessant conversation and happened to be part of all 732,472 pitches thrown in the 2019 regular season.

The ball -- the rocket ball, the juiced ball, the super ball, whatever you want to call it -- changed the game's calculus this season. Home runs left the park at never-before-seen rates, to the point that teams across the game tweaked their internal algorithms to account for it in future projections and specifically game-planned around it for this season. Nobody was quite sure why this year's ball was so different from balls of previous years. Nobody could say for certain how it happened. Nobody definitely knew whom to blame. Everyone simply agreed: The ball was behaving differently than it had in years past.

Which makes this October that much more curious -- and might have had a demonstrable effect on the Houston Astros' 4-1 victory over the New York Yankees in Game 3 of the American League Championship Series on Tuesday. The postseason ball is dead. It's not just the colder weather or superior pitching, either. Baseball Prospectus' Rob Arthur studied the drag coeffiecient, which helps determine how far balls fly, and said it is significantly greater, with a "one-in-a-million chance" the balls are the same as used in the regular season.

St. Louis Cardinals manager Mike Shildt said his team's analytics department believes the balls are traveling 4 feet less than they did during the regular season. Officials from two other teams, who requested anonymity to not run afoul of the commissioner's office, concurred that whatever batch of balls has been used during October is not performing the way the ones in the regular-season did.

And that leaves us here, in the fifth inning of Game 3, Didi Gregorius at the plate, two on, two out and the Astros clinging to a 2-0 lead. Gerrit Cole, the Astros' starter, unspooled a middle-in 99 mph fastball to Gregorius. He turned on it and drove it 101.4 mph toward Yankee Stadium's short porch in right field. Astros outfielder Josh Reddick backpedaled, tracking the ball at its 41-degree launch angle, going back, back some more, back some more yet. And then, as if some force field commanded the ball to stop, it fell into Reddick's glove with his back against the fence.

This brought about varied reactions. A quick oral history of those 6.3 seconds Gregorius' ball hung in the air:

Cole: "The emotions kind of followed the fly ball, right? So it was kind of like low ... "

Reddick: "Panic. Immediate panic. Anything that goes up in the air in here as we all know has a good chance of getting out of here."

AJ Hinch, Astros manager: "I think every fly ball in 2019 is a homer. In season, regular season, postseason. I don't care. It's kind of been conditioned that way."

Gregorius: "I had the barrel, but I missed it. I was checking to see if maybe something's going to happen, but I know I didn't have all of it."

Hinch: "I immediately watched the hitter. The hitter tells you the most. And he didn't respond right away with the sort of pure excitement. He kind of watched it for a minute and then I looked up and saw Reddick getting back, settling underneath it. I watched Didi again, then I felt a little bit better."

Chad Green, Yankees reliever: "There's obviously been some balls that have been hit well that haven't left the ballpark, so everybody starts to question it."

And that right there, what Green said, is really at the heart of the story about the balls. It comes down to consistency and credibility. The former breeds the latter. The same standard applies to umpires. You might not like the strike zone, but if it is called dependably, it is difficult to quibble. At least you know what you're dealing with.

The ball right now is a wild card. In a statement, MLB said: "Balls that are used in the postseason are pulled from the same batches as balls used in the regular season. Regular season and postseason balls are manufactured with the same materials and under the same processes." Let's take that statement at face value, simply for the sake of argument.

If true, it is a stunning indictment on the process used to manufacture the balls. MLB last year acknowledged that the balls were behaving differently. It started in the second half of the 2015 season, amped up in 2016, drank a keg of Red Bull in 2017, detoxed in 2018 and returned in 2019 as if it had spent the entire winter on a Stanozolol drip. The game changes. That's part of its beauty. But 60 feet, 6 inches between the mound and plate doesn't. Ninety feet between the bases doesn't. Some elements remain consistent to allow the game to rebalance itself amid the deluge of new knowledge gained annually. The ball is expected to be one of them.

MLB argues that the manufacturing process -- the ball is handmade -- allows for those differences, which seem wholly unnecessary. If the ball is going to have a stark effect on the game, and the game is different from month to month based on the ball, shouldn't streamlining the manufacturing process to better ensure uniformity among the balls be some sort of a priority? Certainly MLB doesn't like the constant talk, not just from the media but among players, about the one ubiquitous object on every play.

Going from the regular-season ball to whatever this ball is -- the normal ball? -- has been jarring. Gregorius' drive was one example. Before it, there had been no fly balls to right field from left-handed hitters at Yankee Stadium against four-seam fastballs with 100 to 105 mph exit velocities and launch angles of 38 to 50 degrees in 2019. Of the eight in previous seasons, all were home runs, according to Statcast. Expanding the search to all pitches but tightening the launch angle to between 38 and 43 degrees, there were a dozen (though still none in 2019). Ten of those 12 went for home runs.

There were also two balls hit by Astros catcher Martin Maldonado that looked home run-ish, which is admittedly nonscientific on an issue that is very scientific but speaks to how this season's ball skewed expectations. When you see hitters think they've hit lazy fly balls and those balls land over the fence, it bends reality. Postseason baseball is a different game than it was in the regular season, and not just because the teams are better.

Gregorius, for whatever it's worth, responded to a question about different balls by saying: "Are you serious?" To which anyone else would respond: "Are you serious?" Arthur's story about the balls was the talk of the game. Players heard. Discussed it. Rolled their eyes that the ball was changing. Again. To not know about it, Gregorius would have to actively avoid it. Which, hey, if he's that locked in, good for him. Because all of this talk about the ball is not great for baseball. Any time spent discussing the ball is not spent discussing the players hitting it and throwing it -- the ones who should be the focus of every single conversation during October.

Instead, here we are again, our tinfoil hats on, our black helicopters gassed up, wondering what's real and what isn't. MLB bought Rawlings, which manufactures the ball! (Yes. The league invested in the company last year. And this has been going on for almost half a decade.) Baseball wants more offense! (Sure. Pace of game is a much more pressing issue, and offense only extends it.) The league is doing it, man!

The last one is the most interesting, and plenty of players believe it. But here? Now? When the world is watching? If there's any time to pump up the balls, wouldn't it be now? Even amid the record 6,776 home runs hit this season, a universal truth remained: People love home runs. To shut off that spigot now, intentionally, would be comically stupid.

(Puts tinfoil hat back on)

Or exactly what they want to get you off the scent! 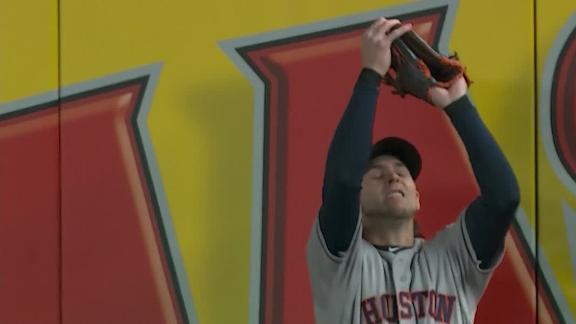