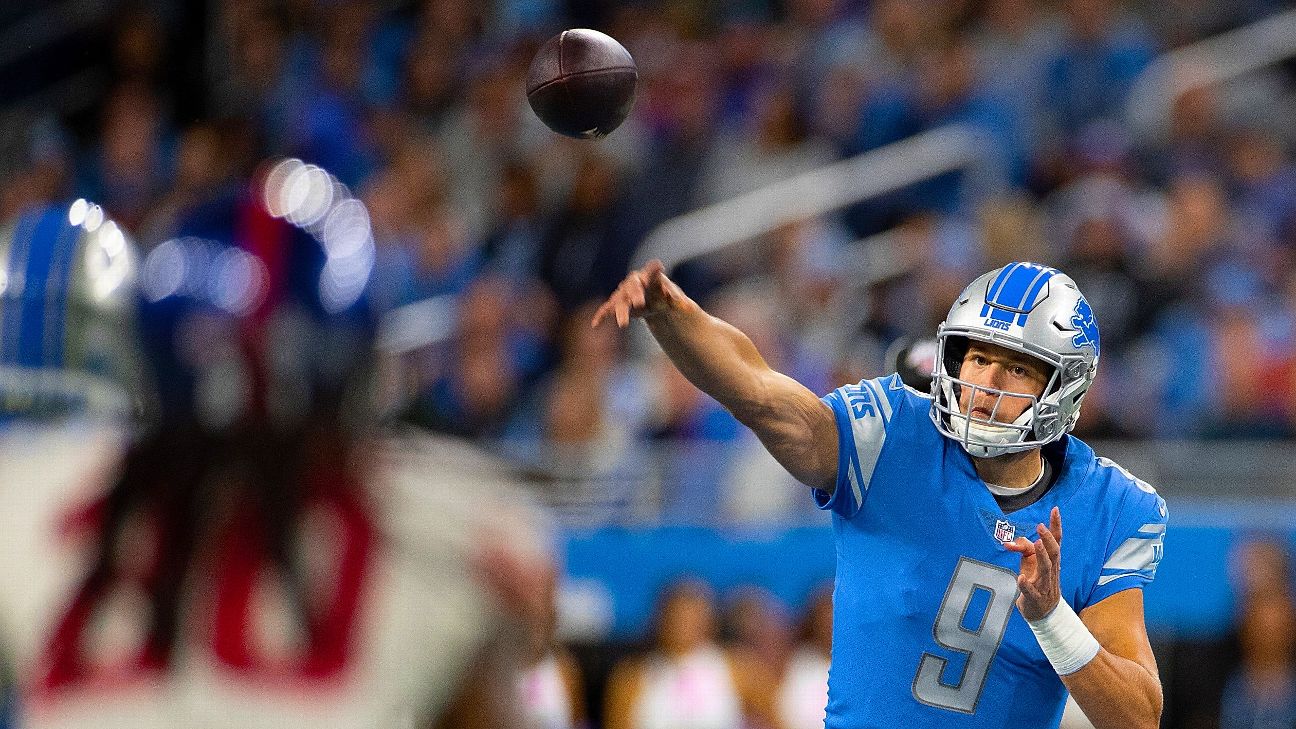 ESPN
By Michael Rothstein
DETROIT -- The Lions brought trickery to the fourth quarter against the Giants with a toss-back touchdown pass. Matthew Stafford sent a toss right to running back J.D. McKissic, who sold the run well enough to be able to toss the ball back to Stafford.

Stafford then had no pressure and threw a perfect ball to Kenny Golladay for a 41-yard touchdown to give Detroit a 31-19 lead. The second Stafford got the ball back, as long as he put it close to Golladay, it seemed destined for a score. Nice wrinkle of a call from offensive coordinator Darrell Bevell.

Detroit's first big play came from the defense. Jarrad Davis delayed for a second, saw an opening in the middle of the New York Giantsoffensive line and sprinted right in. Giants quarterback Daniel Jones was sitting, almost unaware, waiting.

Davis ran at the rookie signal-caller in a hole created by Damon Harrison Sr. and A'Shawn Robinson and forced him to throw the ball backward toward Saquon Barkley. The ball never got there. Devon Kennard picked the ball up and scored a 13-yard touchdown.

Kennard hit a max speed of 17.06 miles per hour on the play, according to Next Gen Stats, and covered 41.34 total yards on the play.

This was a critical play for Detroit for multiple reasons. It had struggled the past few weeks to force turnovers and create pressure from its defensive front. Davis was credited with a sack on a play where the Lions sent four rushers -- including Davis on the delay.

The Lions' first big play on offense from from an unlikely source. Marvin Hall entered Sunday averaging 38 yards a catch, beating opposing defenses deep once a game. He did it again early against the Giants, running through coverage for a wide-open 49-yard touchdown from Matthew Stafford.

Hall, signed from Detroit's practice squad earlier this year, has been Stafford's true deep-ball threat. He's had a catch of at least 30 yards in each of his last four games -- with five catches for 201 yards and one touchdown this season.
Report a correction or typo
Related topics:
sportsespnmatthew stafforddetroit lionsnfldevon kennardnew york giantsmarvin hall
Copyright © 2020 ESPN Internet Ventures. All rights reserved.
More Videos
From CNN Newsource affiliates
TOP STORIES