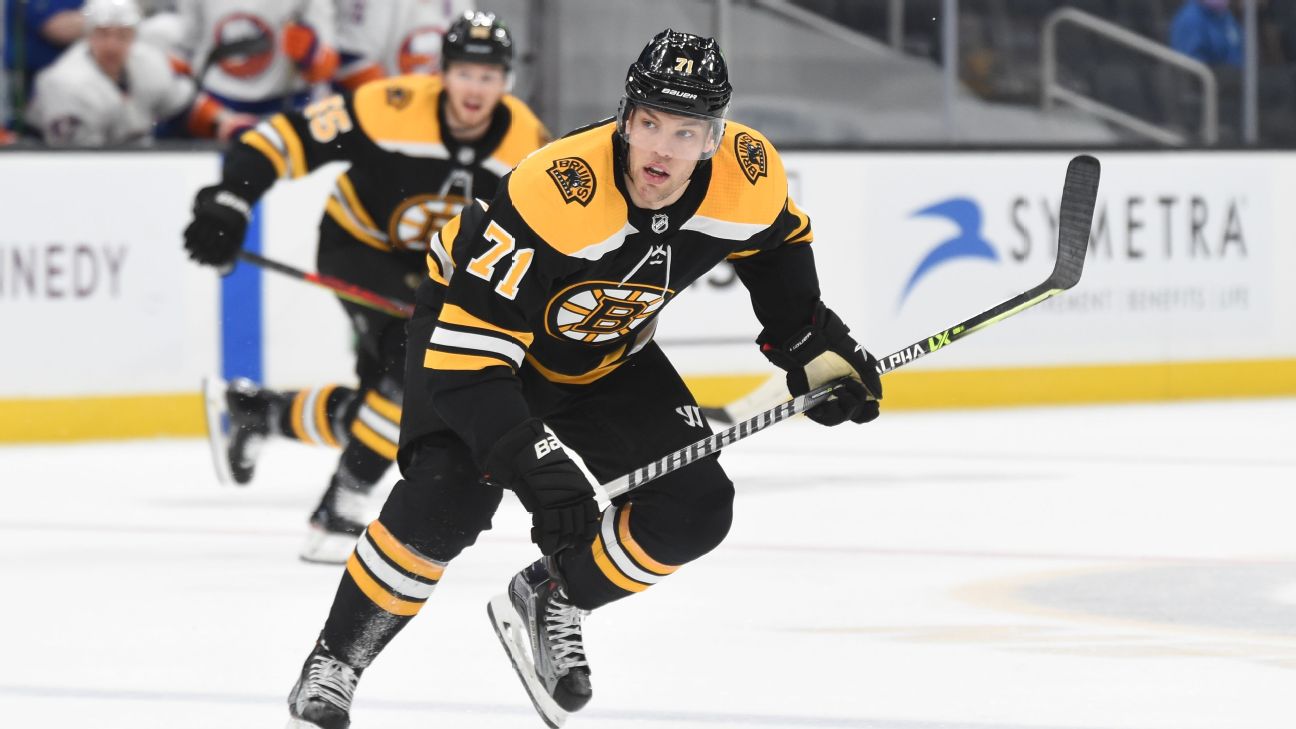 Taylor Hall was traded from the Buffalo Sabres to the Boston Bruins at the deadline, and it might be the best single NHL transaction this season.

Hall, 29, scored eight goals in 16 regular-season games with the Bruins, then two more in theirfirst-round series win against the Washington Capitals, as he heads to the second round of the playoffs for the first time in his 11-year career. It's a big uptick from his two goals in 37 games with Buffalo, coinciding with a paltry 2.3% shooting percentage.


"I think I was probably due for some better luck, scoring-wise," he said.

Concerns about Boston's depth scoring seemed to vanish when Hall came to town; the Bruins were 19th in the NHL in goals per game before the 29-year-old debuted. For the rest of the season, they ranked sixth. Hall loves Boston -- the city, the team, the overall vibe. He's having fun and has made it clear since he arrived that he would like to be in Boston for a while.

"I do want to play here, not just for one or two more years, hopefully longer than that," Hall said. "I don't even know what my worth is right now, honestly. I'm not worried about my contract right now, it's something we'll figure out in the summer. I have much bigger things to worry about as a player, as a teammate. I knew it was a great city, but I've been surprised at how much better it's been than I even thought it was. So hopefully it all works out."

To truly understand why Hall is cherishing this opportunity, you have to appreciate how he got here. For the No. 1 pick of the 2010 draft, it hasn't been a linear path. So, at the request of this reporter, Hall recounted what he learned about himself at each of his five NHL stops.

"I came in as an 18-year-old, left at 24. There was a lot of growth there. Obviously team-wise it didn't work out, we weren't able to have success there. But some of my best friendships came from that time. I had some good coaches, played with some really good players.

"People think of No. 1 overall picks as Sidney Crosby and Connor McDavid, and and I'm not in that category. But I became a good player in this league in my time with Edmonton. So I'm thankful for that."

"The most growth I had was my time in New Jersey. I compare it to a college kid graduating, then he gets his first apartment, his first job, and really grows as a person. I had a coach that challenged me to play better defensively. I feel like I did that. The way I've been able to fit in with Boston and play well on the defensive side has been because of John Hynes challenging me in New Jersey to become a two-way guy. I really do believe that's where I had my growth as a player.

"Obviously, winning the MVP in 2018 was a special moment. Hopefully when I look back on my career, I've won a Stanley Cup. But that was a really cool time to go from someone who was traded, someone who was a 50-point guy, to someone who won MVP."

"In Arizona, I don't think I learned much about myself there. It was a weird time, we played 30 games, there was a pandemic, we went to the bubble and played, and that was basically it."

"Buffalo wasn't a successful time for me at all. I don't have anyone else to blame -- for my play or my statistics or how it went -- but myself. I feel bad that Ralph Krueger had to take the brunt of the blame. The thing I probably learned the most is you have to enjoy playing hockey and I needed to go somewhere I could enjoy playing hockey and really feel that love for the game. Not that I didn't have it in Buffalo, but we had some dark times there. We lost a lot of games in a row. That was challenging for everyone. Eventually we got through it, we had a lot of really good people in the locker room that made the experience better than it could have been.

"When the trade deadline came, my priority just as a person was to get back to really loving the game as much as I could. I hope that doesn't make it seem like Buffalo made me hate hockey, that wasn't the case at all. It was just a tough time for a lot of us there. I wish I would have played better for the fans and the organization; it just didn't work out."

"Some guys can go home and just don't even think about hockey. But for me, I love hockey so much. I love to practice, I love to prepare, I love to play obviously. When you're not enjoying it as much as you can be, it becomes hard. When I came to Boston I was just going to just take things in stride. Enjoy every day.

"And it's worked out. We've won one round, we had a pretty good end of the regular season, but it showed me how fun hockey can be. And that's what I've learned here so far."

The 2021 playoffs and beyond

There's a perception around the NHL that Hall basically willed himself to the Bruins.

Last summer, he signed a one-year, $8 million contract with Buffalo, with a full no-movement clause that gave him significant leverage. Hall nearly signed with Boston as a free agent instead of Buffalo. Immediately after joining Boston at April's trade deadline, he said: "the no-movement clause really helped me become a Bruin."

It was the closest thing we've seen to an NBA-like, player-dictated move. However, Hall said that's not exactly how it went down.


"Leading up to the deadline, there were a couple teams that were interested, I'm not going to say who they were, but if it would have worked out, I would have gone there," he said. "I wasn't just holding out for Boston. I was eager to join a playoff team. I was eager to join somewhere that had good culture, and where winning was sustainable. Because I was looking for somewhere I could re-sign, not just the 20 games to end the season.

"I'm obviously thrilled it worked out with Boston, but if there were other places that would have come in sooner, I probably would've bit the bullet and done that."

In fact, Hall doesn't think a player empowerment movement is coming to the NHL anytime soon.

"I don't think it will get to the level of NBA -- I don't think it will get anywhere close," Hall said. "It's just not something I would envision an NHL player doing, having that kind of influence. NBA players have a lot of leverage over general managers and owners in the NBA, which is great for them. They have a lot of power and they're some of the biggest -- not just athletes -- but celebrities in the world. You listen to any hip-hop song right now, and chances are it's got a basketball player's name in it. What they've done for social justice is huge. They've done a lot of really good things in making themselves accessible, promoting themselves as players and personalities.

"Hockey players, we just haven't done that and I don't know if it will ever be in our DNA to think like that. But who knows? With guys like Auston Matthews and younger guys that are taking over the league, if they want to put themselves out there more, it will be a positive for them."

For now, Hall is happy to have just found a hockey home, where he doesn't have to always be the center of attention.

There's inherent pressure in being a No. 1 draft pick and the face of a franchise. It's easy to understand why at this stage in his career, Hall isn't craving as much spotlight. When he signed in Buffalo, one of the big lures was playing on a roster featuring Jack Eichel.

Similarly, being on a team with Patrice Bergeron, Brad Marchand and David Pastrnak has taken some of the burden away from Hall -- who has played predominantly with David Krejci and Craig Smith on the second line.

"Having the No. 1 line ahead of us, they take the tough matchups, they take the hard D-zone faceoffs, they take a lot of the harder matchups, and it allows us to come in and do our job," he said. "Obviously I'm not the face of the team like I had been in other spots. I just come in and play, do my job, and that's been really fun."

Hall also thinks it's been working out in Boston because the team plays a style with which he meshes well. "We're an attacking team, we forecheck hard, we pressure hard all over the ice," Hall said.

It has also helped that he has found chemistry with his linemates.

"A lot of people told me, if Krejci finds linemates that he fits well with, he can be one of the best centermen in the league," Hall said. "I think you saw that the last 15 or so games of the season."

And if Hall and his teammates end up achieving their ultimate goal: a Stanley Cup? Well, maybe he'll get name-dropped in a song after all.