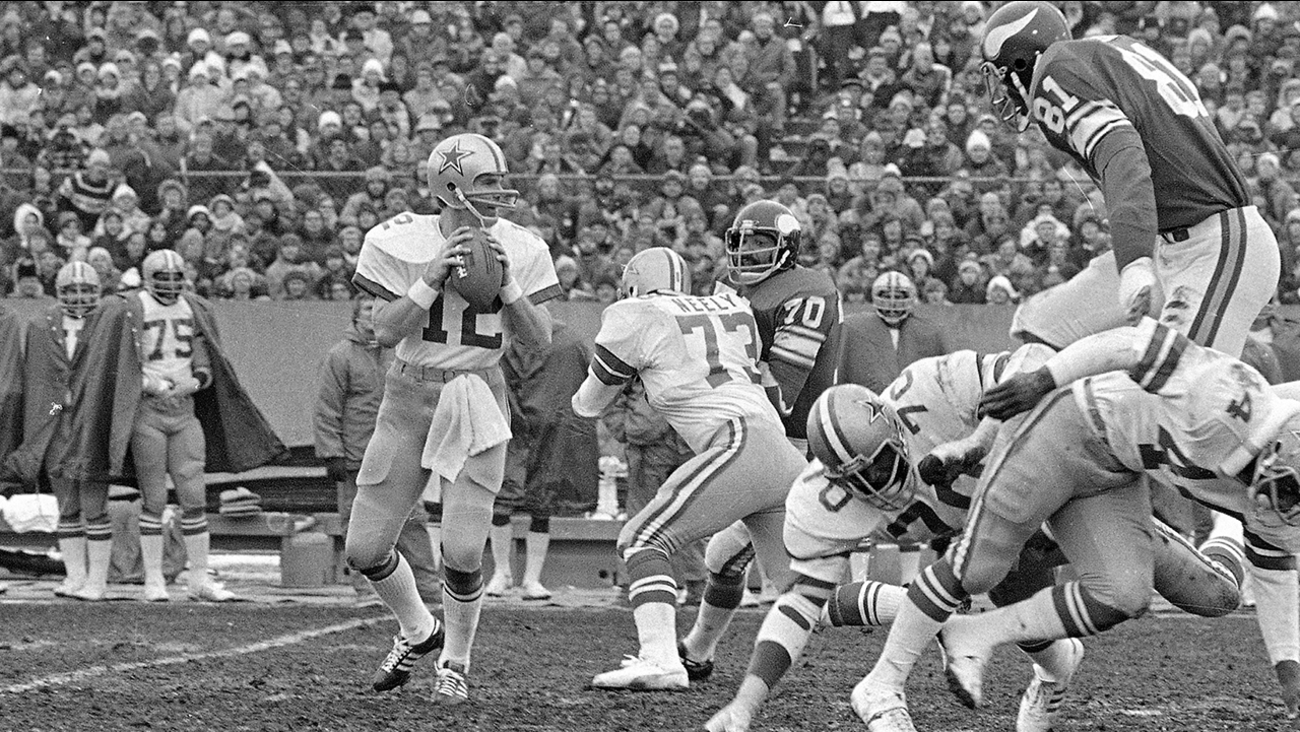 Dallas Cowboys quarterback Roger Staubach looks for a receiver during the NFC playoff game against the Minnesota Vikings in Bloomington, Minn. on Dec. 28, 1975. (AP)

WABC
The "Hail Mary" pass: That last second, long shot attempt for a losing football team to come from behind and win the game. While these miracle throws have generated some of the most exciting plays in NFL history, the term became commonplace after one football game that happened 41 years ago on Wednesday.

On Dec. 28, 1975, the Dallas Cowboys were trailing 14-10 to the Minnesota Vikings during the NFC Divisional Championship. With seconds left on the clock, quarterback Roger Staubach threw a 50-yard pass to wide receiver Drew Pearson, resulting in an improbable touchdown and a come-from-behind win for the Cowboys.

The term "Hail Mary" was used by Staubach when the quarterback spoke with sportswriters following the game. Staubach reminisced to the Dallas Morning News in 2010 about how his pass got its name.

"I was kidding around with the writers," Staubach said. "Then they asked the question. I said, 'I got knocked down on the play...I closed my eyes and said a Hail Mary.'"

The Cowboys went on to defeat the Los Angeles Rams in the NFC Championship game but would lose 21-17 to the Pittsburgh Steelers in Super Bowl X. Staubach's pass, though, would become one of the defining moments of that season and his NFL career, with the phrase Hail Mary spreading even beyond sports.

"It slowly became the term for anybody that was kind of in trouble, and you had a hope," Staubach said, according to the St. Paul Pioneer Press. "You used to have a wing and a prayer, and now the Hail Mary is used for politics, for business, and for football."

Before Staubach popularized the term to mean an incredible comeback touchdown pass, the term's first usage in football is thought to date back to Oct. 28, 1922, according to ESPN. Notre Dame was trailing 3-0 against Georgia Tech when Fighting Irish guard Noble Kizer said to his teammates in the huddle, "Boys, let's have a Hail Mary," and immediately afterward scored a touchdown in the second quarter. Kizer is said to have repeated the Hail Mary again in the fourth quarter before the team scored yet another touchdown, winning the game.

Notre Dame's comeback win against Ohio State on Nov. 2, 1935, named the best game in the first 100 years of football by the Associated Press in 1969, is considered to be the first case of the Hail Mary pass in modern context. With less than a minute left on the clock, Fighting Irish backup quarterback backup William Shakespeare threw a 19-yard pass that Wayne Millner caught on his knees in the end zone, resulting in a 18-13 win.

More than 40 years after Staubach's miracle throw, Hail Mary passes have only become more popular in the NFL. In 1983, quarterback Steve Bartkowski threw a last second pass to wide receiver Billy Johnson, giving the Atlanta Falcons a 28-24 victory over the San Francisco 49ers in one of the most exciting Hail Mary passes in league history. In 2015, Green Bay Packers quarterback Aaron Rodgers connected with tight end Richard Rodgers for a a 61-yard Hail Mary pass and a 27-23 victory over the Detroit Lions on Dec. 3, now known as the "Miracle in Motown."

Staubach says it's been enjoyable to be known for the iconic play.

"The NFL has put out Hail Mary T-shirts," Staubach said. "They have a big 'Hail Mary' on the front and it explains the play on the back. I bought a bunch for my grandkids."
Related topics:
sportssan francisco 49ersdistractionlos angeles ramsnflbuzzworthynfl playoffsatlanta falconsdetroit lionsgreen bay packersdallas cowboysminnesota vikings
Copyright © 2020 WABC-TV. All Rights Reserved.
More Videos
From CNN Newsource affiliates
TOP STORIES