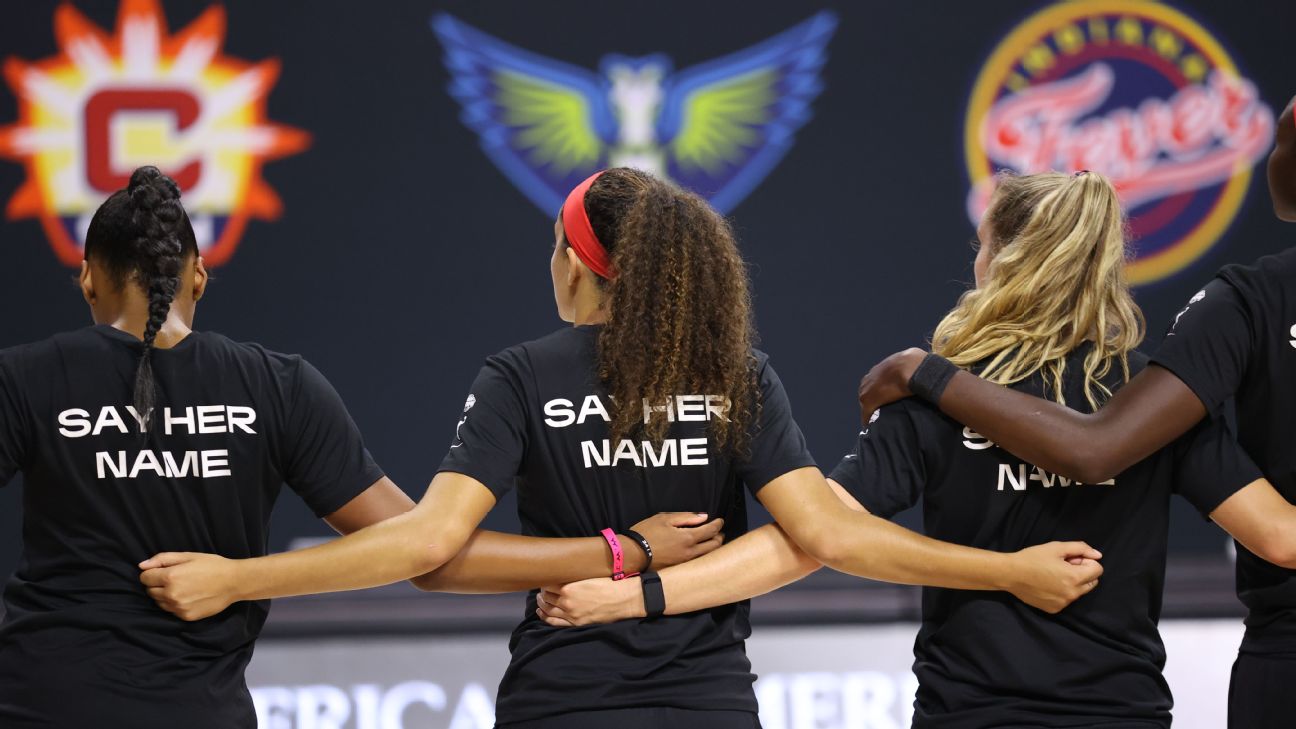 The Los Angeles Sparks' Chelsea Gray chats with NBA players such as the Los Angeles Lakers' Quinn Cook and the Orlando Magic's Michael Carter-Williams. They're all professional basketball guards in their late 20s who can talk hoops and life and who have mutual respect.

Friendships between WNBA and NBA players have been commonplace over the years. They often start -- as was the case with Gray and Cook at Duke -- when players are at the same college.


But as the WNBA returned to play Friday in Bradenton, Florida -- after a two-day work stoppage that coincided with NBA players' decision to postpone the playoffs as a social justice protest -- it's notable how much stronger the bond seems between the players of both leagues. It's a bond that transcends basketball.

Although WNBA players are used to havingtheir on- and off-court accomplishments overlooked by certain sectors, the women's longtime commitment to social justice has not been ignored by the NBA.

"They actually were the leaders of this. They set the tone from the very beginning, even before NBA players started protesting," former NBA center and ESPN analyst Kendrick Perkins said. "They brought awareness to this a long time ago.

"What they did [Thursday], coming together, locking arms and having that special on ESPN talking about social justice ... it was a beautiful thing to see."

There was also appreciation this week from players such as Oklahoma City's Chris Paul, who noted that when the NBA decided Wednesday to sit out in the Milwaukee Bucks-led response to the shooting of Jacob Blake in Kenosha, Wisconsin, the WNBA did the same.

"I commend our men, our brothers for noticing," Las Vegas' Angel McCoughtry said. "We need their voices to help our voices as well."

McCoughtry originated the idea of wearing Breonna Taylor's name on WNBA jerseys this season. The WNBA has put particular focus on the "Say Her Name" campaign for women who have been killed or wounded in interactions with the police. Taylor was shot to death in March during a no-knock police raid on her home.

Gray is one of the WNBA players raising funds for social justice causes based on performance. On Friday, the Sparks announced that Gray will donate $50 for every assist she records in the 2020 WNBA season to Equality California, an LGBTQ rights organization, and Rock The Vote. The Sparks will match her contribution.

The WNBA also started a social justice council in early July, an idea the NBA embraced this week.

"The WNBA women have been very creative about how they go about things," Perkins said. "And we all are in this together. And it's very important we stay together because that's what's gonna make us even more powerful and get things done."

There were times, though, when WNBA players felt alone in advocating for issues they cared about. The league began in 1997, and though there was a strong overall message about empowering women then, there wasn't much outward support specifically directed toward Black or LGBTQ issues. Laurel Richie, the league's third president, who took over in 2011, should get credit for progress on both of those fronts.

Although the league had a misstep under Richie's successor, Lisa Borders, when players were fined for wearing Black Lives Matter warm-up shirts in 2016, the fines were subsequently rescinded, and Borders offered support to the players on social justice issues. Current WNBA commissioner Cathy Engelbert -- the title change of the league's leader is not insignificant -- agreed fully with the players' union that social justice issues had to be at the forefront of this 2020 season in the bubble -- and going forward.

Although their voices have been amplified, WNBA players are aware of how much larger the NBA's platform is. That is why it matters when NBA players wear WNBA hoodies and work directly with the WNBA on initiatives and give credit to the women for the ideas they've had and the leadership they've shown.

Seattle's Sue Bird, who entered the WNBA as the No. 1 pick in 2002 and is the league's longest-tenured active player, said there are a number of reasons that the alliance between NBA and WNBA players on a host of issues is stronger now than it was when she began her pro career.

"I think our league is just more legitimate now," Bird said. "And the men in the NBA have grown up with our league, so it's more of a natural partnership. And a lot of these guys and the women in our league have gone to All-American games together and played in college together. There's just this connection, and it extends into the professional ranks.


"We get to know people at the Olympics. There's a laundry list of ways in which we interact. And I think that's led to us wanting to unify. It's also common ground, the things we are talking about."

Of course, there has been no greater example of commitment to a cause than four-time WNBA champion Maya Moore's decision to sit out the past two seasons as she worked to help free family friend Jonathan Irons after he spent 22 years in prison.

Whether it's criminal justice reform, Black Lives Matter, voter registration, LGBTQ support, women's pay inequity, improvements for mothers in the workplace or something else, WNBA players have continued to speak out.

When you live at the intersection of so many prejudices, like WNBA players do, you feel these issues at your core.

"We have to understand and take seriously that for women, particularly women of color, it's an even greater burden to carry," said Los Angeles Sparks coach Derek Fisher, who played 18 seasons in the NBA. "There are a lot of things as women they are fighting for outside of just race: fighting to be valued, appreciated, respected, supported and invested in.

"To see them over the last couple of days continue to take an even stronger stance on what is important to them when they don't have the multimillion-dollar contracts and endorsements that their male counterparts have, to still take the risk and take that stand ... it's been inspiring." 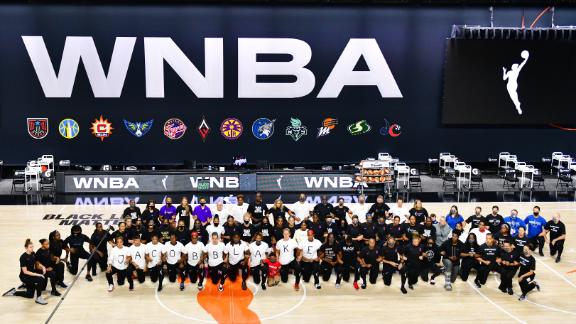 Jefferson and Barnes praise WNBA for taking the lead on fighting social injustice
Richard Jefferson and Matt Barnes discuss the actions of WNBA players and how the NBA can learn from its counterparts as they fight racial inequality in the U.S. 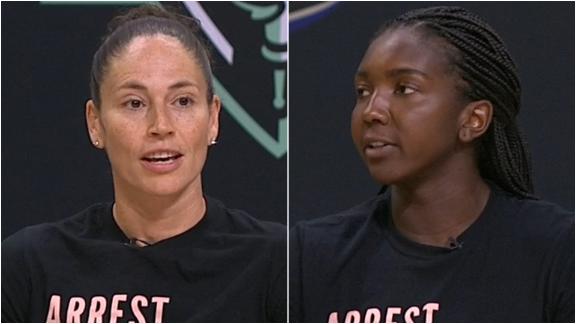 Bird and Williams stress the importance of voting
Sue Bird and Elizabeth Williams appreciate the impact of the protesters in the streets but believe that voting is the best way to create change. 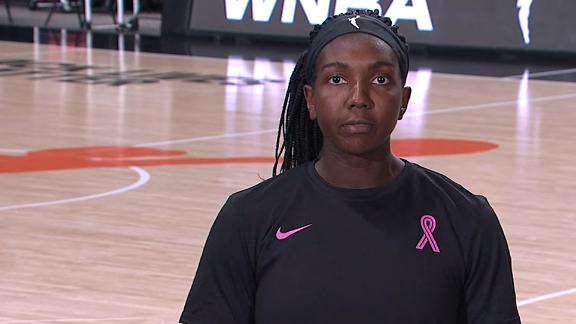