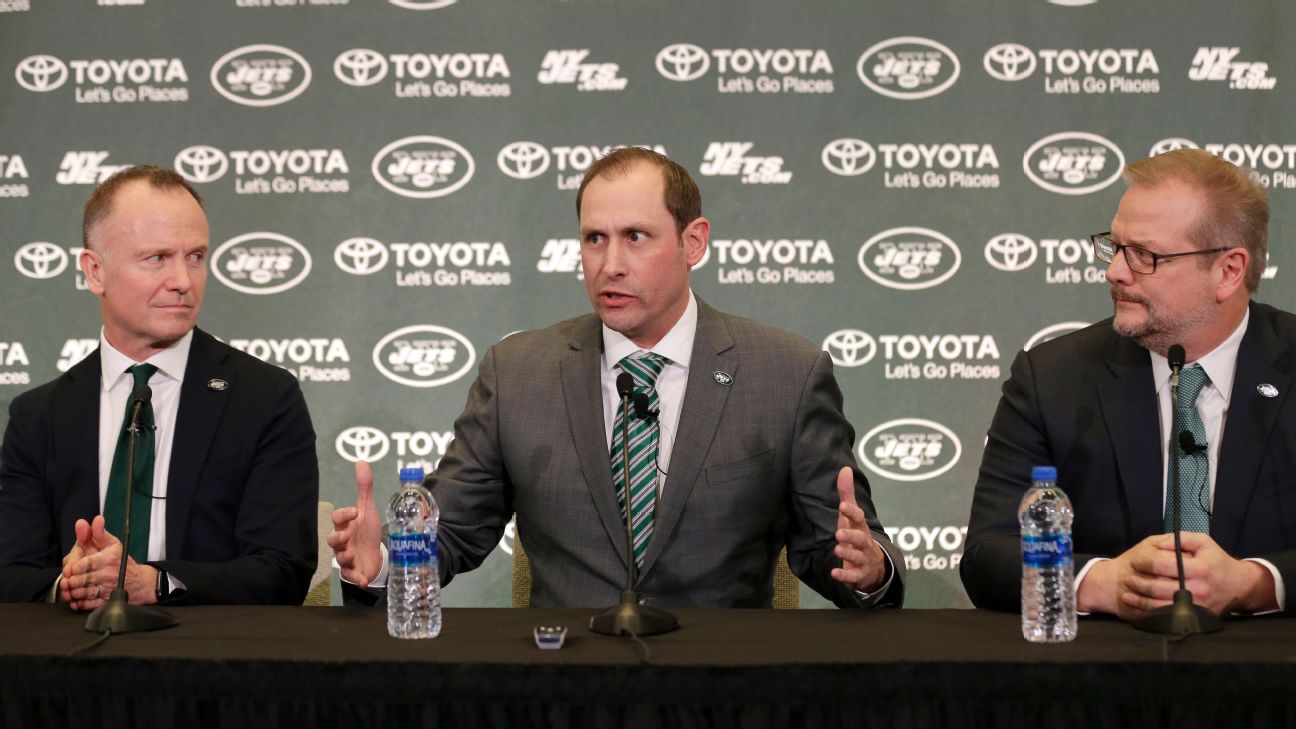 FLORHAM PARK, N.J. -- On the day they introduced their first offensive-minded head coach in more than 20 years, the New York Jets were forced to play defense.

CEO Christopher Johnson defended the decision to hire Adam Gase, insisting Monday that he isn't worried about the negative reaction from fans.

In two seasons as the acting owner, Johnson has presided over 5-11 and 4-12 seasons, resulting in Todd Bowles' ouster. After interviewing eight candidates, including former Green Bay Packers coach Mike McCarthy, the Jets picked Gase, in large part because of his background with quarterbacks. That was the theme of the day: quarterbacks and Sam Darnold, who had input on the coaching search. The Jets' hierarchy overlooked Gase's mediocre record with the Miami Dolphins (23-25) because they believe he can turn Darnold into a star.

"It's really the first time I've been able to get with a guy this young, this early in his career," said Gase, who has worked with Peyton Manning, Jay Cutler and Ryan Tannehill. "He's hungry for knowledge. He wants to be coached. When you have a player like that who also has the physical traits, it's exciting for me."

Gase said his first priority is hiring a staff. The Jets haven't announced any hires, but they have retained special-teams coordinator Brant Boyer, sources said. Former Cleveland Browns interim coach Gregg Williams has been floated as a defensive coordinator candidate, but that isn't a done deal. Gase might not hire a quarterbacks coach, suggesting that he will be hands-on with Darnold.

The Jets' most recent head coach with an offensive background was Rich Kotite, who went 4-28 in 1995-96. The league is trending toward so-called quarterback whisperers, and the Jets joined the fad.

"To paraphrase Wayne Gretzky, he's coaching to where football is going," Johnson said of Gase.

McCarthy is an offensive-minded coach, and unlike Gase, he has won a Super Bowl. Johnson described McCarthy as a "terrific" candidate who enjoyed an "incredible run" with Brett Favre and Aaron Rodgers, but that wasn't enough to convince him and general manager Mike Maccagnan that McCarthy was right for the Jets, who haven't made the playoffs in eight years.

"To me, to Mike, seeing how Adam has gotten the best out of quarterbacks in different stages of their careers is vitally important, no question," Johnson said in explaining why he preferred Gase.

"It's not that there was anything wrong with McCarthy or any of the other guys. They were fantastic, but Adam took it to another level."

Johnson refuted reports that said talks with McCarthy and Baylor coach Matt Rhule broke down because management wanted to pick their assistant coaches. Rhule, in a radio interview after Gase was hired, said he didn't want to be part of "an arranged marriage."

"No, that never happened," Johnson said. "I completely deny it."

Gase didn't bring much electricity to his first news conference, speaking for less than two minutes with his opening remarks. He avoided bold statements and spoke in generalities, not sharing his vision for the team.

He lamented Miami's offensive struggles last season (31st in yards), saying the Dolphins sacrificed statistics for wins. He also claimed that he is on board with the Jets' power structure. He won't have control of the roster, an authority he held in Miami.

"That's not something I was really interested in," he said. "That's just kind of how it worked out in Miami. It was something that was almost offered up. ... I knew coming in here it would be a team effort. I can do my part, which is coaching the team."

Gase received a strong endorsement from Manning, who called Johnson last week to advocate for Gase. Asked about Manning's recommendation, Gase smiled and said, "I feel like he's had to do it too much."

Gase excited to work with Darnold
New Jets head coach Adam Gase breaks down what he has seen from Sam Darnold and how eager he is to work with him.
Report a correction or typo
Related topics:
sportsespnadam gasechristopher johnsonnflnew york jets
Copyright © 2020 ESPN Internet Ventures. All rights reserved.
More Videos
From CNN Newsource affiliates
TOP STORIES