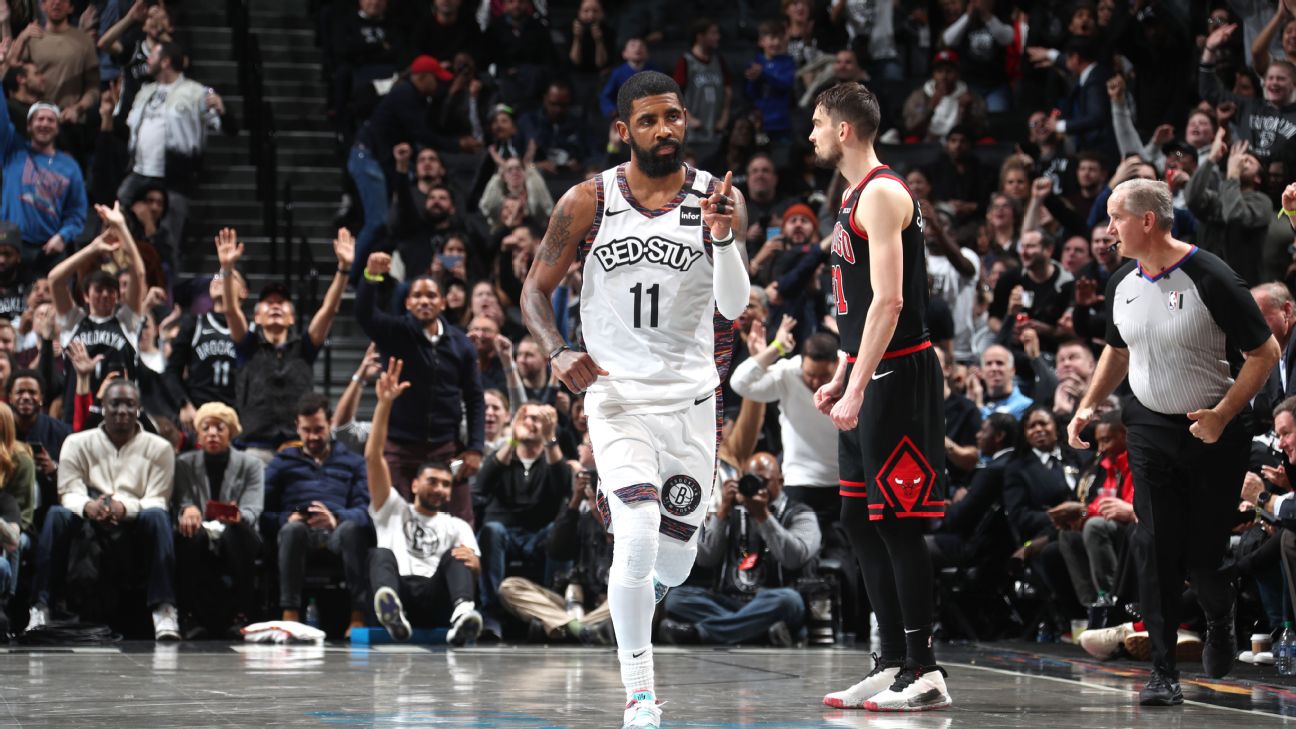 Arena security guards couldn't believe it. Reporters on press row couldn't help but let out an impressed squeak. Even Irving's teammates were left awestruck. Every fan in the arena leaped up, fists raised, mouths open, hollering.

It happened with 1.1 seconds left in the second quarter, after Irving finished a layup on the break. Just as Chicago Bulls point guard Tomá Satoransk crossed half court with the basketball, Irving lunged. In equal parts grace and aggression, Irving's left hand snatched the ball from Satoransk in mid-dribble, took three steps and launched from 33 feet. The ball was still soaring when the game clock expired.

"No way," one young fan in a black-and-white threaded No. 11 Nets jersey exclaimed.

Yes, way. Because when Irving -- the mesmerizing passer, sink-the-unbelievable-shot shooter, fancy-footwork point guard -- starts to sizzle, there isn't much that can stop him. That shot to close the quarter sealed a 27-point first half for Irving.

"I had to keep it going," Irving said during his on-court interview after the final buzzer sounded on the Nets' 133-118 victory. "Kobe mentality and Mamba mentality."

It wasn't quite a perfect night, but it was sure close. Irving finished the first half a flawless 10-of-10 from the field, 4-of-4 from 3 and 3-of-3 from the free throw line. All told, Irving was an ultra-efficient 19-of-23 from the field. He missed only two of his nine 3-point attempts and one of his 10 free throws.

But that first half was perfect. And Nets teammate Garrett Temple saw it coming before the game even tipped off.

Irving is usually reserved before games. He sits and stews at his locker. He studies plays. He shoots hours before most of his teammates take the court. But on Friday, Temple said Irving's concentration was sharper than usual.

"I knew something was up," Temple said. "He was real quiet before the game. I think before the game started, he was sitting in his spot. I think I heard him tell DJ (DeAndre Jordan), 'I am just locked in.' And yeah, he was extra, extra locked in. It was incredible. Everything was going in. Like I always say, I am just glad I am on his team now."

Irving's finals stats put him in rare company. After finishing 82.6% from the field, Irving joined Wilt Chamberlain and Michael Jordan as the only players in NBA history to shoot that high of a percentage from the field in a 50-point game.

"Hometown kid is coming for the records," Irving said, smiling. "I am grateful to be on the list. I really see the talent offensively rising in our league."

And he wasn't the only one to dazzle. Center Jarrett Allen kicked out an uncharacteristically snazzy behind-the-back pass to Joe Harris for a 3-pointer. Temple hammered down a dunk over Chicago center Cristiano Felicio, something that has been a rarity for the veteran in his 10 years in the league. Spencer Dinwiddie scored 20 points in just under 30 minutes of playing time.

But all of that was overshadowed by Irving's dominance.

It was a Game 7-caliber performance that left the arena electrified, reminiscent of a much younger Irving's dagger shooting in the NBA Finals against the Golden State Warriors. In actuality, though, the Nets are in the midst of attempting to claw upward in the playoff race, and Irving has played in only 19 games this season.

By the time Irving cut through the throng of reporters to reflect on his career night, that chilly 21-win reality had already begun to set in.

"You feel as good as you can," Irving said. "You just want to carry that over to the next game."

That next game, Brooklyn's 48th of the season, would tip off in 18 hours, on the road against the Washington Wizards. And so the beat goes on. 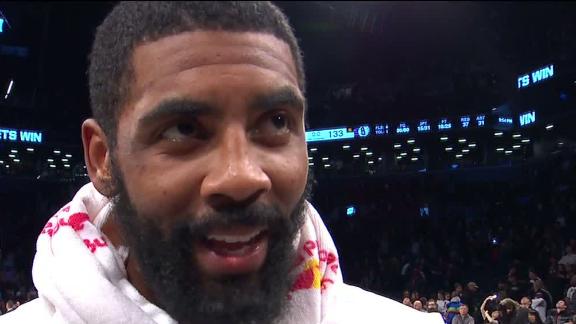 Kyrie channels 'Mamba mentality' during 54-point performance
Kyrie Irving discusses his 54-point night and how a couple early shots falling and "Mamba mentality" kept him going during the game. 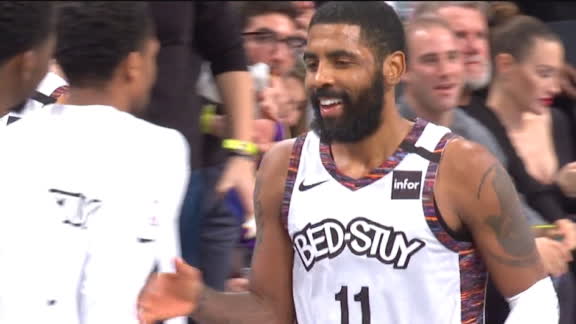 Kyrie finishes half 10-of-10 with a buzzer-beating 3
Kyrie Irving goes 10-of-10 in the first half and finishes it with a steal and a buzzer-beating 3-pointer.
Report a correction or typo
Related topics:
sportsespnchicago bullskyrie irvingnbabrooklyn netscommentary
Copyright © 2020 ESPN Internet Ventures. All rights reserved.
More Videos
From CNN Newsource affiliates
TOP STORIES