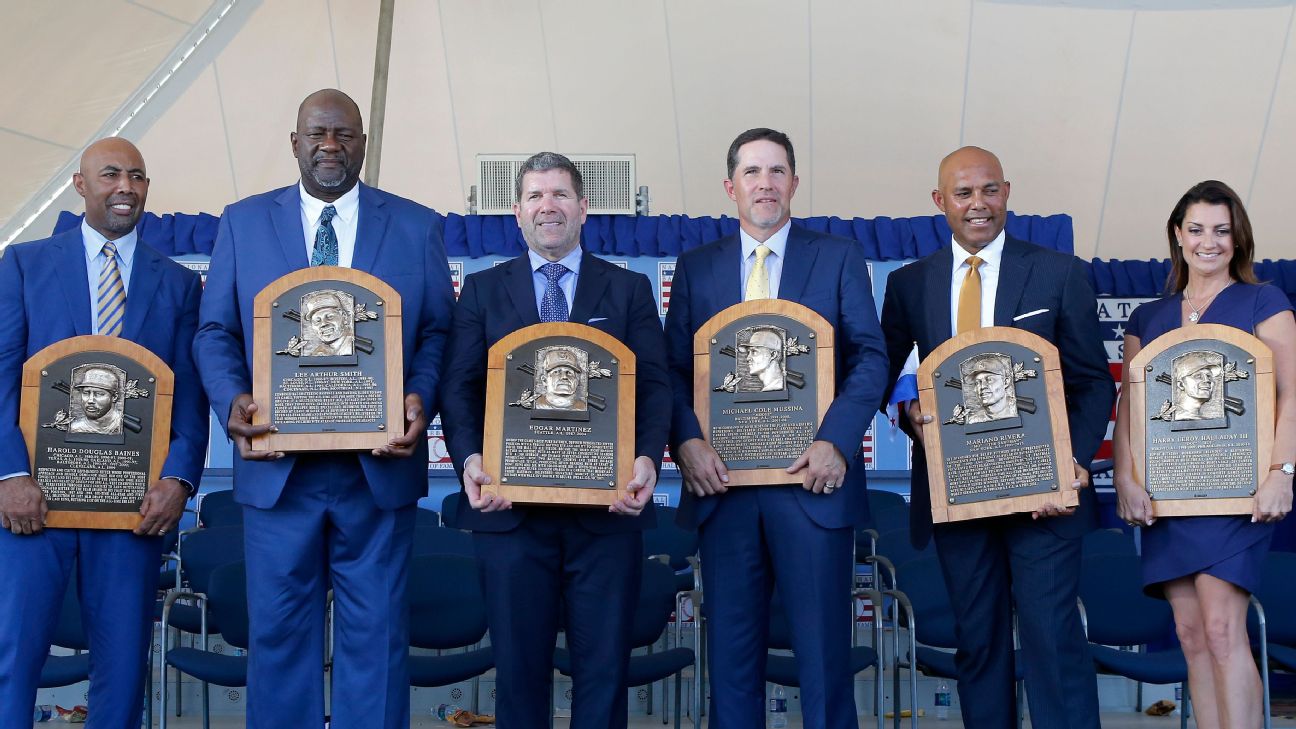 COOPERSTOWN, N.Y. -- For Mariano Rivera, it was the culmination of a storied career, dreams of being the next Pele long since forgotten. For Brandy Halladay, the Baseball Hall of Fame induction ceremony was a tearful moment to reflect on the accomplishments of her late husband, and she handled a difficult task admirably.

Rivera, the career saves leader and the first player unanimously voted into the Hall by the Baseball Writers' Association of America, was greeted by chants of his name from the adoring crowd as he stepped to the podium in a fitting close to Sunday's ceremony. He spoke in both English and, at the end, in Spanish, rarely looking down at the speech he had prepared.

"I think I choose that because sometimes you write words and it doesn't sound right,'' Rivera said. "But when you come from the heart, it comes right. My intention was always to speak from the heart.''

Rivera and fellow closer Lee Smith, starters Mike Mussina and Roy Halladay, and designated hitters Edgar Martinez and Harold Baines were feted on a sun-splashed afternoon in Cooperstown. A crowd estimated at 55,000, the second-largest for an induction ceremony, quickly made Rivera feel at peace.

"You're special for me,'' said Rivera, who left his native Panama in 1990 unable to speak English. "Thank you for your help. Latin American fans, thank you. Thank you for loving me. I'm so humbled and blessed to receive this incredible honor. God bless you all.''

As a child, Rivera dreamed of being a soccer player in the mold of the great Brazilian star, Pele. Instead, he found his niche on a baseball mound and finished his career with 652 saves. He pitched 19 seasons in the major leagues, all with the New York Yankees, and retired with 952 games finished -- also a record. A 13-time All-Star, Rivera helped the Yankees win five World Series titles and seven American League pennants.

"To the fans, you guys always pushed me to be the best,'' he said. "When I was at Yankee Stadium pitching, it felt like I was pitching with 55,000 people throwing one pitch after another. Without your support, I cannot do it. You guys came to see me succeed.''

Brandy Halladay fought back tears as she spoke for her late husband, who had two sons.

"I knew I was going to cry at some point. It's overwhelming the amount of people here today,'' she said, tears welling in her eyes, her voice quavering with emotion. "I'm so grateful you're here. I can't tell you how many hugs I've gotten. There are not enough words to thank you.

"I know how honored Roy would be to be sitting here with such accomplished men. Thank you for being such a good example to him and to supporting him in his career. This is not my speech to give.''

The son of a commercial pilot, Roy Halladay was 40 when he was killed in a plane crash in November 2017 into the Gulf of Mexico while piloting his own plane alone off the Florida coast 20 miles from his home. A toxicology report showed high levels of amphetamines and morphine in his system and hints of an antidepressant.

"I think that Roy would want everyone to know that people are not perfect,'' Brandy said. "We are all imperfect and flawed in one way or another. We all struggle, but with hard work, humility and dedication, imperfect people can still have perfect moments. Roy was blessed in his life and in his career to have some perfect moments.''

A two-time Cy Young Award winner, Halladay amassed a 203-105 record in a 16-year career with Toronto and Philadelphia. He became just the second pitcher in major league history to throw a no-hitter in the postseason, opening the 2010 National League Division Series with one against the Cincinnati Reds in the first playoff start of his career. He also pitched a perfect game that season. Halladay was elected in his first year on the ballot.

"Of course he would be honored and humbled,'' Brandy Halladay said. "He was a true competitor. He went to the field every day ready to do whatever it took to give his team the best possible chance to win. I think Roy would rather be remembered by who he was, not what he did on the ballfield. He so desperately wanted to be as great and successful at home as he was in baseball.''

The family decided that there would be no logo on Halladay's plaque because both organizations meant a lot to him.

Mussina, who pitched for 18 major league seasons, posted a record of 270-153 and was a seven-time Gold Glove winner. He spent his entire career in the high-scoring American League East with the Orioles and Yankees.

"I spent a lot of time reflecting on my time in baseball,'' said Mussina, the oldest first-time 20-game winner in MLB history when he reached the milestone at age 39 in 2008, his final season in the majors. "I was never fortunate to win a Cy Young Award or be a World Series champion, win 300 games or strike out 3,000 hitters. My opportunities for those achievements are in the past. Today, I get to become a member of the Baseball Hall of Fame. This time I made it.''

Smiling from beginning to end, Smith congratulated his new classmates before crediting his family and hometown of Castor, Louisiana, for much of his success.

"It's been my family. They're the main reason I'm standing here today,'' Smith said. "To my mom and dad -- your support has meant everything to me.''

Smith pitched 18 seasons for the Cubs, Red Sox, Cardinals, Yankees, Orioles, Angels, Reds and Expos and retired as MLB's career saves leader with 478, a title he held for 13 seasons. That total now ranks third all time, as do his 802 games finished.

Martinez was a seven-time All-Star and five-time Silver Slugger Award winner for Seattle, where he spent his entire 18-year career. He won two AL batting titles, led the league in on-base percentage three times, and was named the outstanding designated hitter five times, an award that now bears his name.

"I am honored and humbled to be standing here,'' said Martinez, who was born in New York, grew up in Puerto Rico and also delivered part of his speech in Spanish. "It is hard to believe that a dream that started when I was 10 years old [ended here]. The first time I saw Roberto Clemente, all I wanted to do was play the game. What an honor to have my plaque in the Hall alongside his.''

The soft-spoken Baines, a Maryland native who still lives there, never displayed much emotion in his 22-year career, but his voice cracked throughout his speech.

"Somehow I acquired a reputation for not saying much. I'm not sure why,'' he deadpanned at the start. "From teachers to coaches who showed me kindness and discipline, I thank you all for what you've done for me. If I can leave you with one message, it's to give back to your community. I stand here very humbled. It has taken time to sink in.''

The late Frank Robinson and Willie McCovey were honored with a moment of silence before Mussina was introduced to start the ceremony. The two Hall of Famers died since last year's induction ceremony. 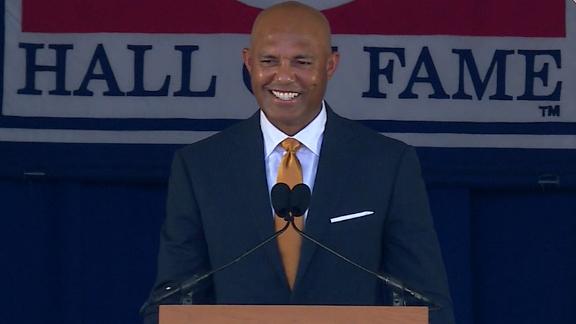