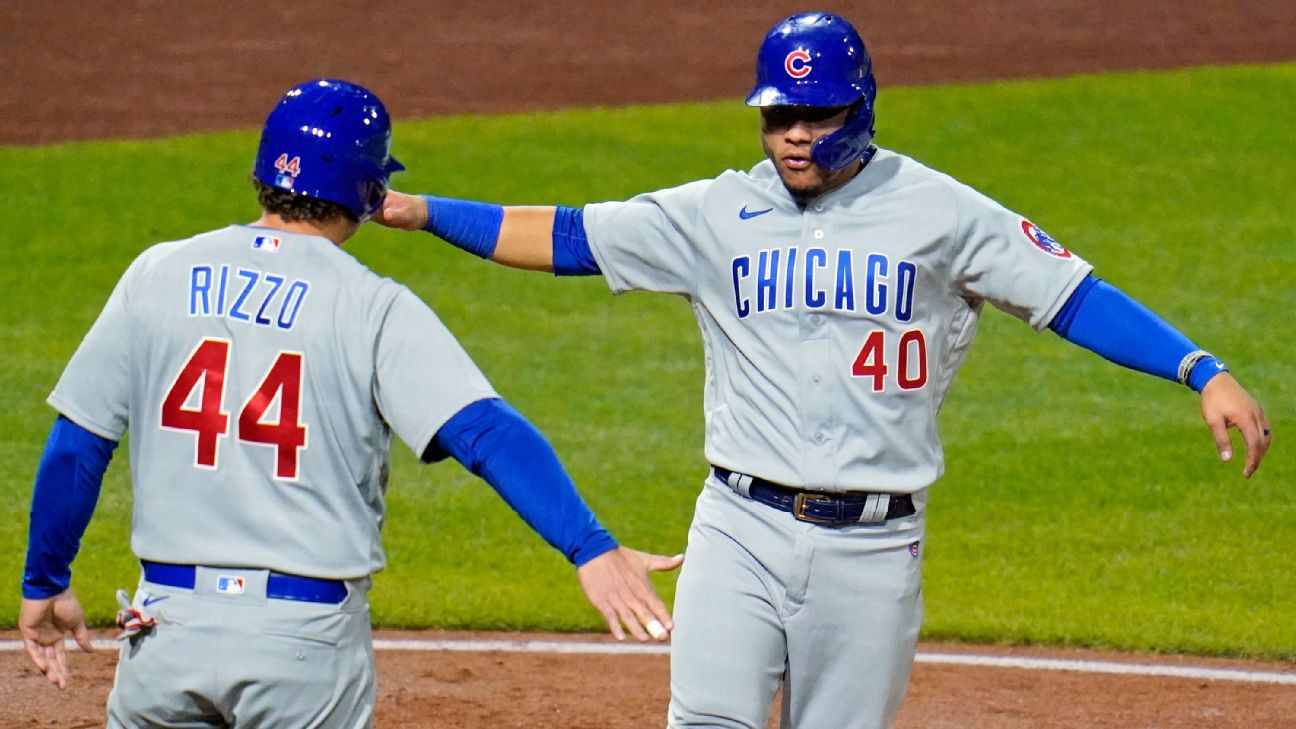 The 2020 MLB playoffs are just over a week away, even though it seems like only yesterday that the regular season kicked off. The compressed 60-game schedule is rapidly coming to a close, and the MLB standings are tight heading to the finish, with wild-card positioning, postseason seeding and the rest of the playoff picture at stake.

As has been the case with so much this season, the playoffs will have a new look, with an expanded format that includes 16 teams for the first time in MLB history.


This will be the place to visit every day through the end of the regular season for updated looks at the potential playoff field, recaps of the biggest games, analysis of the most important storylines and previews of the critical games ahead.

If the season ended today ...

The matchups:Here's what the first round of the expanded playoffs would look like, based on the standings entering play Tuesday, Sept. 21.

The overwhelming preseason favorite was the first team to secure a spot in the postseason tournament, clinching a berth with Wednesday's win over the Padres. L.A. took two of three from San Diego, which sits in second place in the NL West.

What's next? The Dodgers, who hold the best record in baseball, are looking for their eighth consecutive NL West championship and the top seed in the league. Of course, the big prize for the Dodgers would be their first World Series title since 1988. This will be L.A.'s 14th playoff appearance since the Dodgers last won it all.

Dodgers must-read: How A.J. and Kate Pollock faced their daughter's premature birth during the COVID-19 pandemic

The White Sox clinched their first playoff berth since 2008 on Thursday. It will be the 10th postseason appearance in the history of the franchise, which dates to 1903.

What's next? Chicago is looking for the AL Central title and perhaps even the No. 1 overall seed in the AL field. After taking three of four from the Twins, the White Sox hold a three-game lead in the Central.

TheRays clinched the sixth postseason appearance in franchise history and their second in a row. Last year, Tampa Bay beat Oakland in the AL wild-card game and lost to Houston in the division series.

What's next? The Rays' next goal would be to win the AL East title. It would be their first division crown since 2010.

The A's punched their third straight postseason ticket with a win over the Giants on Friday night in Oakland.

What's next?After securing their first AL West crown since 2013 on Monday, the A's are still in the mix for one of the AL's top two seeds.

A's must-read:Inside the A's dominance and how they plan to make it last

TheTwins clinched their third postseason appearance in the past four seasons with their 8-1 win over the Cubs on Saturday. Last year, they were swept by the Yankees in the division series, extending their postseason losing streak to 16 straight since their last win back in Game 1 of the 2004 AL Division Series.

What's next? Catching the White Sox in the AL Central is probably out of reach, so the next goal would be snapping that postseason losing streak.

The Padres clinched their first postseason appearance since 2006 when they came back to beat the Mariners in extra innings 7-4 after fending off a no-hit bid.

What's next? Catching the Dodgers in the NL West in the last week of the season is unlikely, so maintaining their position as the top-seeded nondivision winner is their more likely near-term goal as they get ready to make good on their 2020 breakthrough.

How Padres GM A.J. Preller decided to go for it

Although they took a beating in Boston on Sunday, the Yankees clinched a playoff spot when the Padres beat the Mariners.

What's next? With the Rays 4 games ahead in the AL East, the Yankees' most immediate goals are probably tied to lining up their rotation for October and getting their injury-wracked lineup prepped for the postseason.

Who could clinch next?

The Indians can clinch a postseason with a win over the White Sox or a Mariners loss to the Astros.

The Los Angeles Dodgers can clinch the NL West with a win over the A's and a Padres loss to the Angels.

The Cubs can clinch a postseason berth with a win over the Pirates AND either:

+ Reds win over the Brewers

In the tussle for the final National League playoff slots, the Reds got a leg up by beating the Brewers 6-3. The game was a dandy pitchers' duel between Cincinnati's Luis Castillo and Milwaukee's Brandon Woodruff most of the way, but Eugenio Suarez sent Woodruff to the showers with a two-run homer on Woodruff's 100th pitch that gave the Reds a 2-1 lead they would not relinquish.

With their eighth win in nine games, the Reds are over .500 for the first time since their win on Opening Day and are back on the positive side of the postseason cutoff line. After slumbering most of the summer, Cincy's offense finally has woken up. During their 8-1 run, the Reds have averaged 5.2 runs per game and have an .810 OPS, both in the top five in baseball.

Cincinnati has two more huge games with the Brewers before closing the season with three against the Twins.

Also of note: Two other contenders for the final NL spots suffered losses to last-place teams at a time when that is not advisable behavior. The Phillies dropped to .500 and into the No. 8 seed with a 5-1 loss to the Nationals, and the Cardinals fell 4-1 to the Royals as Adam Wainwright ran out of gas in the sixth inning. St. Louis sits one percentage point ahead of Cincinnati for second place in the NL Central. And the Giants' 7-2 loss to the Rockies kept them on the outside looking in. ... The Indians moved to the cusp of a playoff spot Monday with a 7-4 win over the White Sox that ended with the type of drama we can expect to see by the barrelful over the next couple of weeks. With top MVP contender Jose Abreu representing the tying run with two outs in the top of the ninth, Cleveland closer Brad Hand froze him on a backdoor slider to end it. Hand has 14 saves to anchor an excellent Indians bullpen that will come in handy given the compressed postseason schedule.Jose Ramirez hitting on all cylinders also will come in handy - and that's just what he's been doing of late. Ramirez hit his fifth home run in five games Monday and is hitting .381 with nine homers, 19 RBIs and a 1.316 OPS in September. ... In the NL Cy Young chase, Jacob deGrom did Jacob deGrom things, striking out 14 and allowing just two runs over seven innings - and taking a 2-1 loss to the Rays.

Pennant race debate: Which one player are you most excited to see this postseason?

David Schoenfield: Shane Bieber. The Indians haven't won the World Series since 1948, and they are hardly the favorites to win the American League, but Bieber is the pitcher most likely to have a Madison Bumgarner-type 2014 run and carry an otherwise mediocre team to the title.

Joon Lee: Tim Anderson not only finds himself in the middle of a chase with DJ LeMahieu for his second straight batting title, but also for the American League MVP with Cleveland Indians hurler Shane Bieber and teammate Jose Abreu amid another career season during a pandemic. Anderson is the heart and soul of the insurgent White Sox, and the 27-year-old shortstop will be making the first playoff appearance of his career. When considering those circumstances, his penchant for bringing excitement and flair to the field and his dynamic bat at the top of the lineup on the South Side, Anderson figures to make a sizable impression with the eyes of baseball fans nationwide squarely focused on the young and exciting White Sox squad.

Sam Miller: Yu Darvish hasn't appeared in the postseason since his disastrous pair of starts in the 2017 World Series, and in the ensuing period he has changed teams, gotten hurt, been a bust, added yet another pitch, and once more become -- surprisingly, but not too surprisingly -- one of the world's five best starting pitchers. He's never had the control over his arsenal that he has now, and nobody is more of a threat to throw a no-hitter in any given start. He doesn't need to redeem himself for the 2017 World Series -- his career is so much more than those two starts -- but it'll be really satisfying to watch him play the ace this October.

Bradford Doolittle: In both 1997 (Livan Hernandez) and 2003 (Josh Beckett), the Marlins' championship runs were fueled by a hot, emergent pitcher. While I'm not predicting Miami will go on a title romp if it gets into the playoffs, Sixto Sanchez could be that kind of emergent pitcher for them this October. Both his traditional results and his Statcast metrics are elite, and he could be going up against a club that has never seen him before in the opener of a best-of-three series. And that opponent could end up being the Dodgers.

Alden Gonzalez:Sixto Sanchez -- because I don't think anybody has an answer for him at the moment.

Yankees-Blue Jays, Tuesday (6:30 p.m. ET on ESPN): The Yankees, trying to stay within striking distance of the No. 1 seed in the AL, turn toGerrit Colein a potential first-round preview.

Cardinals-Royals, Wednesday (8 p.m. ET on ESPN2): St. Louis is fighting for a playoff spot, adding some extra juice to this Missouri matchup.

Brewers-Cardinals, Thursday (8:15 p.m. ET on ESPN+): Milwaukee and St. Louis begin a season-ending five-game series that could have major implications on two of the NL's remaining playoff spots.

Phillies-Rays, Friday (6:40 p.m. ET on ESPN+): The Phillies could enter this final series of the weekend on either side of the line for the final playoff spots while the Rays are currently in a tight race for the AL's No. 1 overall seed. 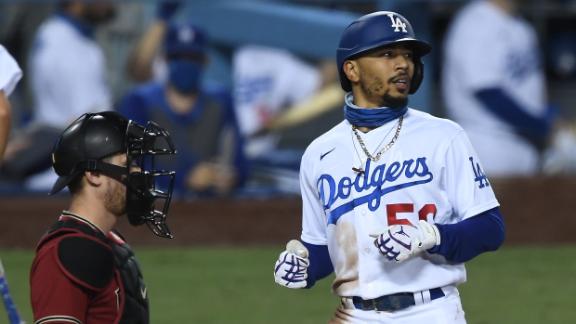 Dodgers staring down tough road to World Series
Mark Teixeira points out the difficult path the Dodgers may face in the postseason while Tim Kurkjian believes this may be their best team in years. 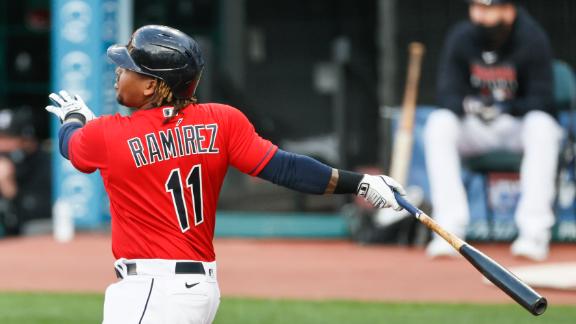