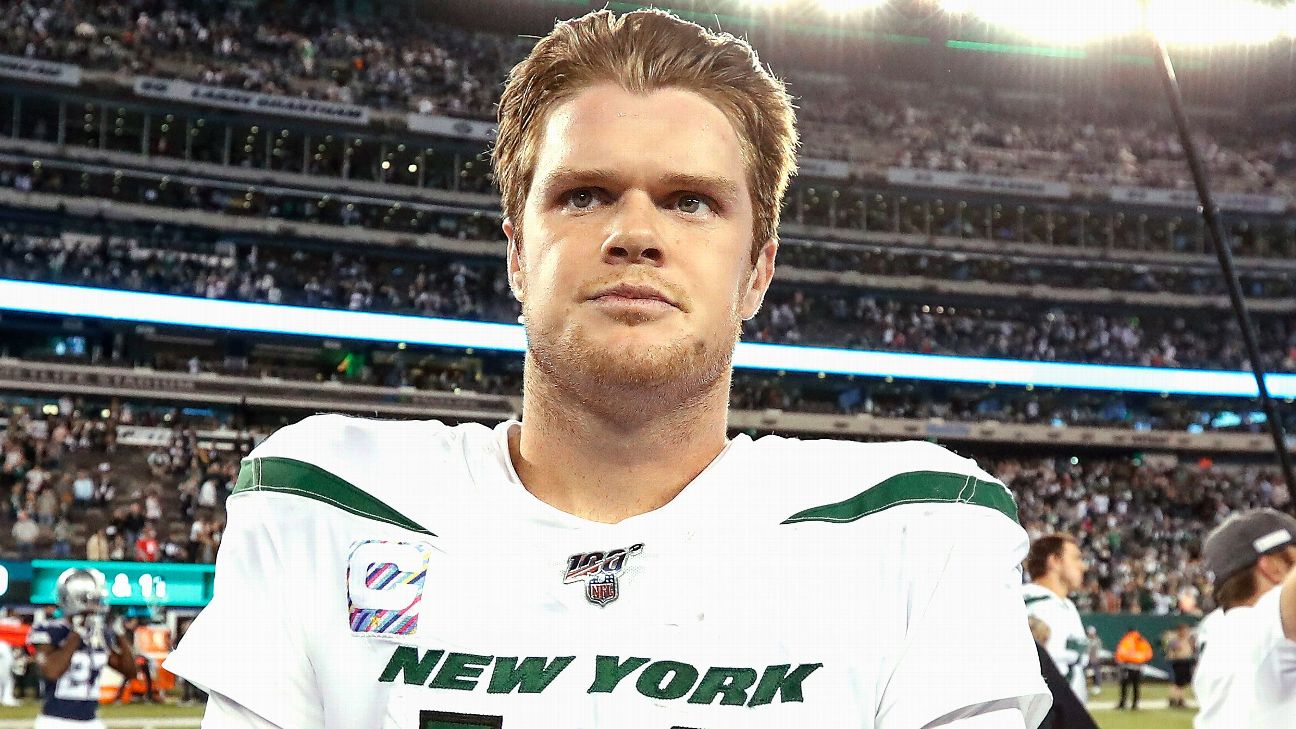 FLORHAM PARK, N.J. -- When the New York Jets last played on Monday Night Football, only five weeks ago, Sam Darnold was at his New Jersey apartment, hanging out with his parents in the family room and eating take-out Italian. No offense to Dad and Mom, who were visiting and spent part of the day stocking his refrigerator with microwavable bowls of Mom's homemade chicken noodle soup, but this wasn't his idea of cool.

He belonged at MetLife Stadium, 30 miles away, but the 22-year-old quarterback was fighting mononucleosis, not the Cleveland Browns. The frustration and helplessness formed a volatile mix, and it exploded when his replacement, Trevor Siemian, suffered a grotesque ankle injury. Darnold went to his bedroom, shut the door and, after a few seconds of silence, screamed. Then he went MMA on his pillow.

When he finally was allowed back in the team's facility a few days later, Darnold tried to be a resource to his replacement's replacement, Luke Falk, but he was told by the medical staff that he couldn't spend long hours in the building. Go home and rest, they told him. He made a fuss, insisting he was fine. When he finally relented, he went back to his apartment and slept for three hours. He was not fine.

It was a painstaking process, one that included naps, long walks, stationary biking, ultrasounds, blood tests, more naps, smoothies and a lot of chicken noodle soup, but Darnold's nightmare ended two Sundays ago in spectacular fashion. With one completion, and then another and another, he reenergized his forlorn franchise, upsetting the Dallas Cowboys24-22 for the Jets' first win.

"As a young kid at that position -- I won't even say kid, I'll say young man -- sometimes it can get tough on you," said well-traveled wide receiver Demaryius Thomas, who has played with Peyton Manning and Deshaun Watson. "To be able to come back and click on his first day back, I was amazed. I was excited."

That Darnold was able to return so quickly from mono, and play so well after only six practices, was a tribute to his preparation and natural instincts for the position. Because mono is rare in the NFL, it was uncharted territory, with an undercurrent of potential danger. Reporters questioned him about his spleen size and whether he was worried about a rupture. (Unbeknownst to the public, his spleen had returned to its normal size the previous week, but he was held out against the Philadelphia Eagles because his blood test didn't pass muster.)

He eventually conquered the illness, but now another challenge awaits, another viral threat that has been known to debilitate young quarterbacks.

Darnold will have his first real test against the New England Patriots(6-0) on Monday at MetLife (8:15 p.m. ET, ESPN). He faced the Patriots last season, but it was a Week 17 clunker that involved a lame-duck coach (Todd Bowles was fired later that night), a skeleton lineup and a host of players who had already mentally checked out. In other words, he never had a chance. The Jets lost38-3.

The circumstances are much different this time, as the Jets (1-4) -- rejuvenated by Darnold -- have a chance to play their way back into contention. It won't be easy against the Patriots, who are putting up historic defensive numbers. Consider this: They have 14 interceptions and only one touchdown pass allowed.

"Their defense is good -- they have been all year -- but just like any other team, they're not unbeatable," said Darnold, displaying a hint of bravado.

The Patriots are doing it the old-fashioned way, with a heavy dose of man-to-man coverage. They've used man-coverage schemes 67% of the time, the second-highest rate in the league, according to NFL Next Gen Stats. In theory, it should be easy for a young quarterback to decipher man-to-man, as opposed to zone. Thing is, the Patriots have talented players who can cover, and Belichick -- the genius underneath the hoodie -- always adds wrinkles to the scheme.

"They do a good job of putting the quarterback in doubt on what to do," said Jets coach Adam Gase, who called the Patriots' defense the best in the league.

New England confuses even the most experienced quarterbacks by disguising its looks. The Patriots' third-down "zero" package is a big part of their game plan -- an all-out blitz with no deep safety -- but they can switch out of that as soon as the ball is snapped. Belichick toys with young quarterbacks. He twists their minds into pretzels. He makes them think they have to throw quickly.

"It can force you into making mistakes because you have to prepare for the big stuff and play at a pace like the real thing is happening, and they can speed you up into mistakes," said ESPN analyst Dan Orlovsky, a former NFL quarterback.

Belichick will try to inhabit Darnold's brain and force him into bad decisions, but the kid -- uh, young man -- has the ability to play beyond his years. His 5-yard touchdown pass to tight end Ryan Griffin last week had a schoolyard element to it. Thomas was supposed to be his "hot" receiver on a blitz, but Darnold made a sight adjustment at the line and signaled Griffin to be ready for a quick pass. When Griffin turned, the ball was there, perfectly placed.

Darnold figured to be rusty after a five-week layoff, but his accuracy was laser-sharp. He completed 23 of 32 passes for 338 yards even though 31% of his attempts were into tight windows -- the league's second-highest rate in Week 6, according to NFL Next Gen Stats.

Darnold's teammates like to talk about "The Flick," his ability to deliver a pass without a conventional windup -- just a "wrist" throw. Thomas called it "a sneaky flick, and it's like, 'Whoa, whoa!' It reminds me of Aaron Rodgers sometimes when he flicks it."

Just as he finished his sentence, Thomas saw Darnold walking by in the locker room.

Darnold smiled and kept going to a meeting.

This is a barometer game for Darnold because in the AFC East, quarterbacks are measured by how they fare against the Patriots. He's the fourth Young Hopeful to get a crack at the Patriots in the Tom Brady era. In the early 2000s, Chad Pennington showed real promise but couldn't stay healthy. Mark Sanchez delivered a signature moment (a 2010 playoff win in New England) and a regrettable low (the Butt Fumble), ultimately fizzling. Geno Smith was a disaster.

"I think, for us, when you get locked in on trying to break the dynasty or tear them down, that's when you start losing control of yourself and losing control of your emotions during the game," Darnold said. "If we get outside ourselves and try to take down Tom Brady, take down Belichick -- those are all legit things -- but for us, it's really just about focusing on what we need to do."

The Jets, who haven't made the playoffs since 2010, can't dismantle the dynasty in one night, but a win -- one stinkin' win -- would do wonders for the psyche of the franchise. They have dropped seven in a row and 15 of the past 17 to the Patriots, and many of the games were noncompetitive. The Jets need a hero, a player who can inspire them to overtake the Evil Empire.

"He has to own his team," former Jets quarterback and current CBS analyst Boomer Esiason said of Darnold. "The first thing you have to do to own your team is you have to play like he did last week. You have to prove to everybody you can make a difference and raise the level of play of the skill players. Every quarterback needs to become the face of the franchise. With Sam, you can see it. There's just a different vibe, just watching him. It's because they believe in the guy."

Darnold isn't a loud presence, but he exudes a quiet confidence. Gase calls it "swagger without really trying." It's worth noting, though, that Darnold has been more vocal since returning from mono, according to teammates. He certainly raised eyebrows when he told reporters the offense will be "unstoppable" once his top weapons are healthy and back on the field -- an out-of-character comment.

People close to Darnold say the mono, with symptoms that started as far back as the preseason, hit him hard and left him in a dark place. When he returned to the field last week, it was pure joy. Gase studied his quarterback during pregame warm-ups and saw fire and ice. Then, on the first play, Darnold flicked a 17-yard pass Thomas. 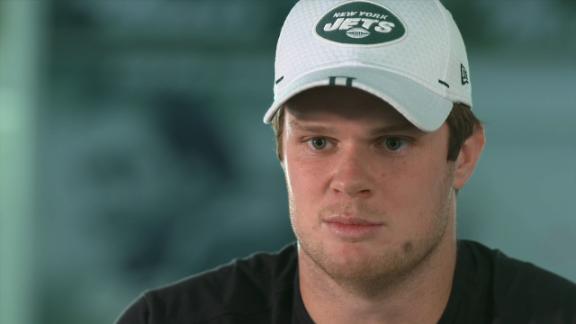 Darnold thought mono diagnosis was a joke at first
Sam Darnold explains why he started laughing when Jets head coach Adam Gase and offensive coordinator Dowell Loggains told him he had mono. 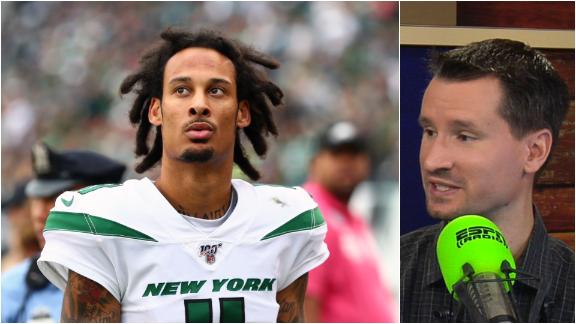