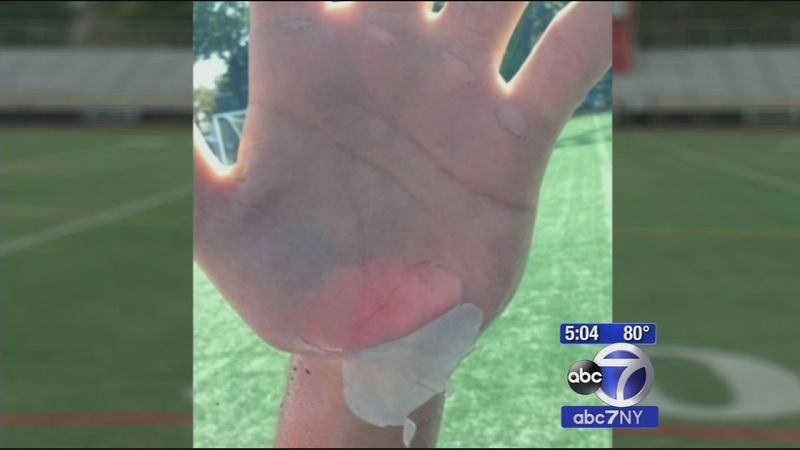 STRATFORD (WABC) -- A local high school football coach is apologizing after he had his players working out in the heat, and the turf got so hot that it burned some players.

It happened in Stratford, Connecticut.

Zach Smith is a senior on the Stratford High School football team and disputes the seriousness of an incident that led to blisters and burns on the palms of players' hands.

"He's the kind of guy that if he knew that was going to happen, he would have not done it," Smith said.

The head coach is T.J. Cavaliere, who during Monday's practice, as punishment for goofing off, ordered players to do a spider-like crawl around the entire field with their hands behind their backs.

More than a dozen players wound up with blisters and burns caused by the hot synthetic turf and rubberized fill.

One player Tweeted a picture of his hand with skin dangling and the words "Stratford High morning practice outcome...yummy."

A parent, whose child is not on the team, is among those outraged.

"That kid should have definitely walked off the field and called his mother to come pick him up, bottom line," parent Felicia Murray said. "Because that is unacceptable."

Cavaliere was not at practice Wednesday afternoon, and school officials wouldn't say why, calling any potential discipline a personnel issue. Superintendent of schools Janet Robinson acknowledged she got complaints from the parents of two players.

"We do everything we can to keep our students safe, and sometimes when an adult has a judgment lapse, we have to deal with that," she said. "We don't want our children hurt."

Still, many parents side firmly with their second-year coach, who apologized to his team Tuesday.