The hours leading up to Zion Williamson's pro debut 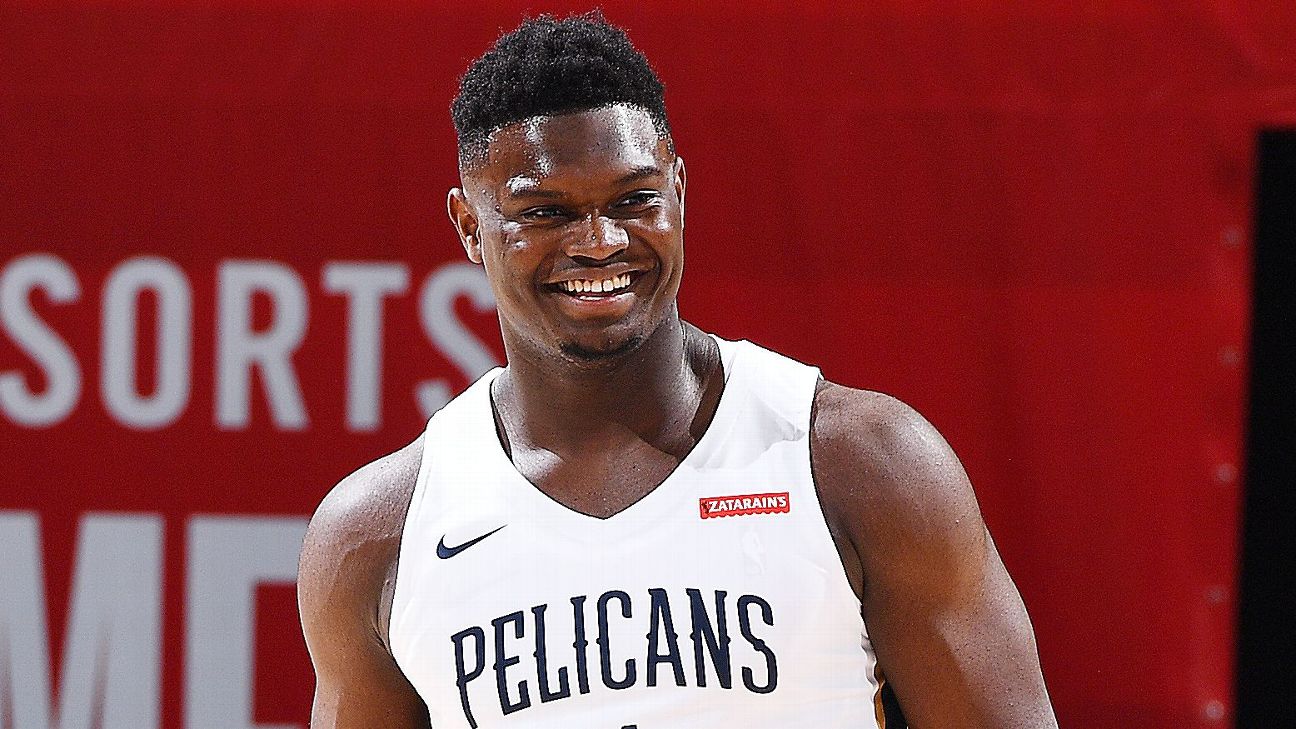 LAS VEGAS -- The lines began to snake around the outside of Thomas & Mack Center hours before the doors to the arena opened. Amid the LeBron James Lakers jerseys and Giannis Antetokounmpo Bucks jerseys were fans donning blue Duke Zion Williamson jerseys.

They waited, in the unrelenting sun, for a glimpse at the dunk-tastic No. 1 draft pick. Eight hours from when the lines began to form, Williamson would be making his summer-league debut.

"It's safe to say this is the main event," the in-game public address announcer bellowed. The crowd roared back.

A look inside the day of Williamson's pro debut reveals a chance encounter, a few highlight dunks and a scary ending. It was a memorable, if not spectacular, initiation for the most heralded NBA rookie in recent memory.

The Pelicans' morning film session was scheduled for 9 a.m. PT. By 9:53, Williamson, his teammates, coaches and front-office staffers piled into a bus and drove from the team's Las Vegas Strip hotel to the practice court on the basement level of Cox Pavilion.

New Orleans' walk-through lasted less than an hour. Afterward, it was back to the hotel for a pregame nap.

Williamson's stepfather, Lee, woke him up at 2 p.m. for a haircut in his room.

'This is about to be everywhere'

About 90 minutes before tipoff, Williamson crossed the hotel lobby and headed to the bus with Randy Greenup, the Pelicans' director of team security. When soon-to-be former franchise star Anthony Davis played for New Orleans, Greenup was Davis' unofficial personal security guard. Now, Greenup and Williamson are joined at the hip. Davis, who recently forced his way out of town after seven seasons in New Orleans, was also in Las Vegas to check out some summer league action. He happened to be in the lobby when Pelicans coaches and staffers were making their way toward the bus.

Davis, who will play for the Los Angeles Lakers next season after a trade involving the teams becomes official, is still well-liked by many within the Pelicans organization. He spent upward of 20 minutes catching up with some of his old colleagues as the Pelicans summer-league players passed by on their way to the team bus.

Williamson was the last player to emerge from the elevator. Instead of heading directly to the front doors, the No. 1 draft pick made a quick detour.

"What's up, boy?" Davis said with a smile as the pair exchanged a handshake and a hug. "You good?"

The pair shared a few quick words as the same Pelicans staffers who had just spent time with Davis smiled at the absurdity of the moment. Here was the past and future of the organization coming together right before Williamson's first game. As Williamson started to walk away, Greenup couldn't let the moment go by without trying to document what he was seeing.

Davis, who started to walk out of the shot, smiled as Greenup took a couple of pictures of the pair, who never quite stood still enough to take the perfect shot. Interested onlookers quietly watched the proceedings and other tourists walked by without a second glance.

"This is about to be everywhere, dawg!" Davis said as he and Williamson exchanged a laugh before the rookie made his way to the bus.

Williamson, dressed in a T-shirt and shorts, was the first Pelicans player to walk through the red door that leads to the bowels of the Thomas & Mack Center at 5:36 p.m.

Hours before tipoff, fans filled the arena. The seats are on a first-come, first-served basis, and attendees wanted to reserve vantage points early. As the minutes ticked down toward game time, more fans steamed through the entrance.

NBA players seemed eager to get a glimpse at Williamson's first NBA minutes too. LeBron James and DeMar DeRozan sat on the baseline. Buddy Hield and Collin Sexton sat side by side. Lonzo Ball, Jrue Holiday, Josh Hart, Julius Randle and Trae Young were all in attendance.

"We have no open seats," the public address announcer said over the speaker system. "We are sold out. Get familiar with your neighbor."

Meanwhile, Williamson's mother, stepfather and younger brother, Noah, filed into the arena. As Williamson's stepfather, Lee Anderson, walked to his seat, he told ESPN: "This is a big night. Look at all these folks."

The crowd was delighted when Williamson threw down a behind-the-back 360 dunk during pregame warm-ups.

Finally, it was time.

The cheers for Williamson, who was announced last in the starting lineup, were thundering. But the response to Williamson's former teammate, RJ Barrett, might have been louder.

This couldn't have been the inaugural game that Williamson envisioned. Sure, he threw down three powerful dunks that excited Hart and Ball enough to cause them to leap from their seats, but that's where the spectacular ended.

After playing only nine minutes, Williamson knocked knees with another player. As a precaution, the Pelicans decided to hold him out for the rest of the game. He finished with 11 points (on 4-of-9 shooting) and three rebounds.

With just less than eight minutes left in the fourth quarter, the scoreboard began to sway and the floor began to shake. At first, the players on the court seemed not to notice the earthquake that was occuring. Eventually, the referee blew the whistle and coaches beckoned their players to their respective benches. Both teams remained on the court for several minutes before walking back to their locker rooms.

The game was postponed. Williamson was hustled out of the arena between two security guards. Fans seeking autographs and selfies were rebuffed by Greenup -- and just like that, it was over. 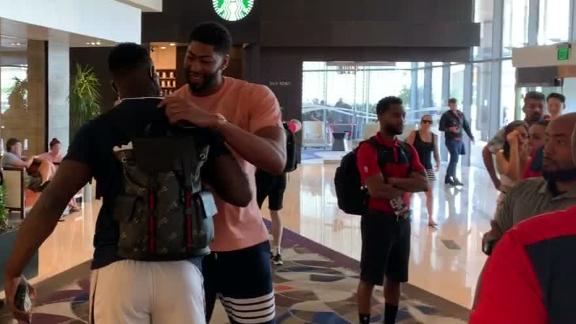 Zion and AD meet
Zion Williamson runs into Anthony Davis right before he takes on RJ Barrett and the Knicks in his first summer league game. 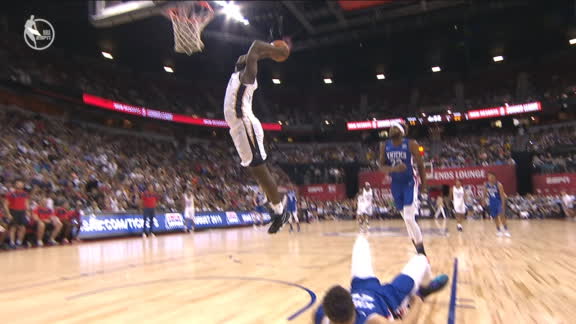 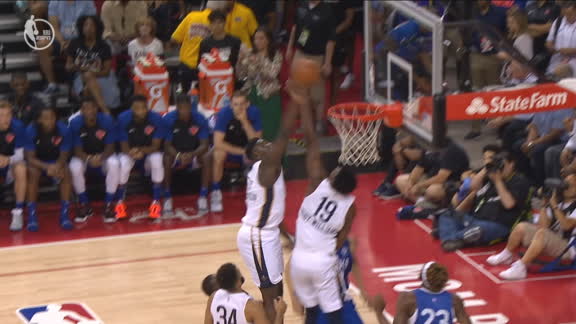 Zion skies high for the block, called for goaltending
Zion Williamson soars into the air and blocks the Kadeem Allen shot but it is ruled a goaltending. 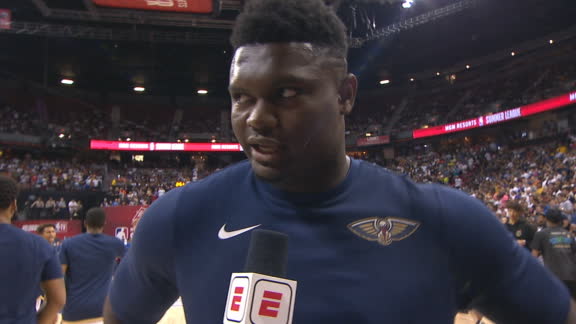