Will pitchers bring the most heat ever in 2019? Not so fast 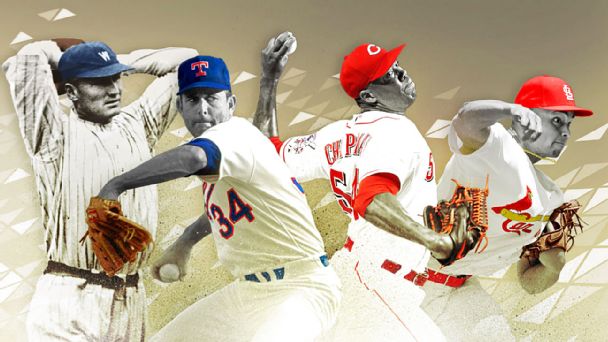 I did not expect it to be so difficult to produce a confident answer to this question:

The background for the question is that velocity has been going up for as long as we've had good measurements for it. That's true of most other athletic skills we can isolate: In the past century, the marathon record has dropped by nearly an hour, the 100-meter record by about one full second, and the 1,500-meter freestyle swim by more than seven minutes. The bench-press record has roughly doubled, and the hour record for bicyclists a century ago has been surpassed by the current record for 60-year-olds. Equipment changes are undeniably part of these new marks, but progress is also pretty intuitive.

If you look at FanGraphs leaderboards, where you can see the average fastball velocity for every year since 2002, you'll see a similarly steep climb: In 2002, FanGraphs displays, the league-average fastball was 89.0 mph, and in 2018 it was 92.8 mph. You might keep that trajectory going through 2030 and end up with something like 95, but there are two problems you run into:

1. The way we measure fastball velocity keeps changing, and even those FanGraphs numbers represent multiple shifts in technology. While each season's velo is accurate on its own, the relationship from one season to another is misleading. The average fastball has not actually gone up 4 mph since 2002.

2. That steep decades-plus climb? It has suddenly stopped. Which is a big "wait, what?" moment.

In 2019, we're spoiled with precision, but for most of baseball history, we've got a much rougher understanding of what happened and at what speed. It still gets us pretty close to the truth: We know Willie Mays was an extraordinary center fielder without knowing what his Statcast-derived defensive metrics would have been, and Maury Wills was very fast without us knowing his feet/second speed.

So we basically know Walter Johnson was the hardest thrower of his era, or darned near it. And then Bob Feller. And then Nolan Ryan. And then the relievers -- Rob Dibble, Mark Wohlers -- and in the 2000s Randy Johnson, Joel Zumaya, Justin Verlander, Aroldis Chapman, a lineage you can track from the Big Train through to Jordan Hicks.

We get a little silly trying to put numbers on those early pitchers, though. Similar to supposed tape-measure home runs, these figures are a mix of hype, misunderstandings and creative problem-solving applied to fill the deficit of technology. That and anecdote, of course. The ways these legendary fastballs were measured have always been changing: Johnson's was measured at a bullet-testing range, Feller's "on photoelectric devices" by the Army, and both also raced motorcycles with pitches. Ryan made the Guinness World Records book based on readings by "four Rockwell International scientists" at a 1974 game, and after that radar guns became common for scouting -- covering the progression from Goose Gossage in the 1970s through Zumaya in the 2000s. But that didn't guarantee consistency: The type of guns used changed, from guns that measured the ball as it crossed the plate to ones that measured it out of the pitcher's hand. That required an adjustment of 4-5 mph, according to Kevin Kerrane, who wrote the classic book on scouting, "Dollar Sign on the Muscle."

The results throughout often defied belief or were wildly inconsistent. Johnson was clocked at 83 mph in one test and 99.7 in another. A "hand-cranked camera, a special-made watch, and a grid-backdrop" in 1917 registered pitch speeds of 150 mph, and 1960s enigma Steve Dalkowski was said to have regularly topped 110 based on nothing but observer certainty. Feller claims he threw 107.9, and Ryan's world-record pitch, adjusted for where the radar picked the pitch up, is sometimes credited as actually 108.5 mph. Who knows?! But it probably wasn't.

Even modern speeds require adjustments or, sometimes, skepticism. The early FanGraphs velocities -- 2002 and through the middle of that decade -- are based on radar-gun velocities recorded (off TV broadcasts) by Baseball Info Solutions, which were then replaced by PITCHf/x readings later in the decade, which were then replaced as the official measurement by Statcast in 2017. Statcast measures pitches sooner out of a pitcher's hand than PITCHf/x did, so it added almost one tick to what we thought of each fastball. The hand-recorded speeds before PITCHf/x, meanwhile, were less accurate in pitch classification, so some non-fastballs -- especially cutters, which were not yet broken out or regularly identified -- would depress the averages. And all of these systems, to varying degrees, have some calibration error.

Which leaves us unable to really say what the trajectory has been, beside almost certainly "up." We know that, within the BIS years, velocity went steadily up. We know that, within the PITCHf/x years, it went steadily up, by about 1 mph over a decade. We know more pitches are now thrown by relievers, who as a group are able to throw harder in short stints than starters are in longer ones. We also know that, when Ben Lindbergh and Rob Arthur recently dove into 73,000 old scouting reports that had been leaked to them, there was a clear upward trajectory within one organization's reports during the 1990s. The average "max" velocity for pitchers scouted in 1991 was 88 mph, but by 2003 it was nearly 92 mph.

"In addition to the fact that velocity increased over this time frame," Lindbergh and Arthur wrote, "some evidence suggests that Reds scouts also began to prioritize velocity to a greater degree. The correlation between max velocity and amateur [Overall Future Projection] was strong throughout the years covered by the data, but it appeared to get stronger in the later years. Similarly, pro reports always showed a significant difference in average fastball velocity between players the Reds were interested in and those they weren't (as indicated by the 'ProsAcq' field). As the years went on, though, their preference for velocity increased." In other words: Teams' preference for velocity grew, giving pitchers more incentive to throw harder -- and teams more incentive to draft and develop hard throwers -- which would help explain why velocity continued to go up in the decades that followed.

So, with limitations on what we know, it is probably responsible to conclude that pitchers throw harder now than they used to, that this rise has been going on consistently and for a long time, and that this was the result of logical forces at work.

Which brings us to the past three years. With the caveat that there are still things that make this complicated to say conclusively -- such as the proportion of two-seamers to four-seamers, or the inclusion of more position players pitching in blowouts -- the trend seems to have hit a wall. Here are the average velocities going back to 2008 of just four-seam fastballs, via MLB Advanced Media. (The recent years use Statcast; before that, the PITCHf/x figures have been adjusted for the different measurement spots, which is to say, these are apples to apples. They should represent the most precise and consistent measure of fastball velocity in the sport's history.)

As Jeff Sullivan wrote last month, the percentage of fastballs over 95 mph or 100 mph has also flattened out, and the rate of pitchers averaging over 95 decreased last year.

Crucially, the velocity of fastballs thrown by rookies has flattened out. Very few pitchers add velocity as they age, so the rise in velocity has always been driven more by each new group of pitchers (and the retirement of old groups of pitchers). But the recent groups have been the first in quite some time who didn't surpass their predecessors.

Meanwhile, pitchers who are already in the majors are not, collectively, slowing down. This chart shows the average four-seam velocities by pitchers who also appeared in the previous season -- not rookies, but established major leaguers:

They haven't hit a plateau at all, which seems to rule out the hypothesis that pitchers in the majors simply aren't trying to throw as hard anymore, or that we are seeing a measurement error. Pitchers still want to throw harder. Velo is still considered good.

One of two things would be the simplest explanation. The first is that teams have quit selecting as much for velocity when they draft and develop pitchers. Pitchers still want to throw as hard as they're capable of -- faster is generally better -- but hard-throwing pitchers might no longer be crowding out pitchers with other, less-velocity-dependent skill sets. We tend to value what we can measure, so when radar guns were the only tech tool for scouts, velocity took on an outsized importance in evaluation. But Trackman units are becoming ubiquitous and allow teams to measure spin rates, pitch movement and effective velocity. Clubs can access the whole rainbow now, which has allowed them to look past velocity and make more nuanced assessments of young pitchers.

The other is that we've simply reached a peak. There might not be a wave of next prospects capable of redefining what human ligaments can do.

"Pitching, unlike most athletic activities, has reached the limit of what is humanly possible," Tom Verducci wrote in a 2008 profile of Tim Lincecum. "So while we are accustomed to increasingly swifter sprinters, faster swimmers, longer drivers of the golf ball and bigger football players, you will not see a pitcher throwing 110 mph. The arm and shoulder are maxed out. Pushed any further, the shoulder would blow, like an engine in a race car."

The next decade seemed intent on disproving that. But the prediction might not have been wrong, just a little early.

But that Chapman pitch was thrown almost a decade ago, and that 93.2 mph average is no faster than it was in 2016. We've reached a weird situation, where we have a huge sample of shifting, mutating, imprecise data that tell us velocities always go up. And we have a very small sample -- three years -- of extremely precise data telling us that that history has stopped.

Predict what'll happen by 2030? Buddy, I'm in knots trying to predict this year. But here we go:


I have no real evidence for any of this, but that's how it is. We can finally measure enough to know what we've seen, but we're still way short when it comes to answering what we'll see.