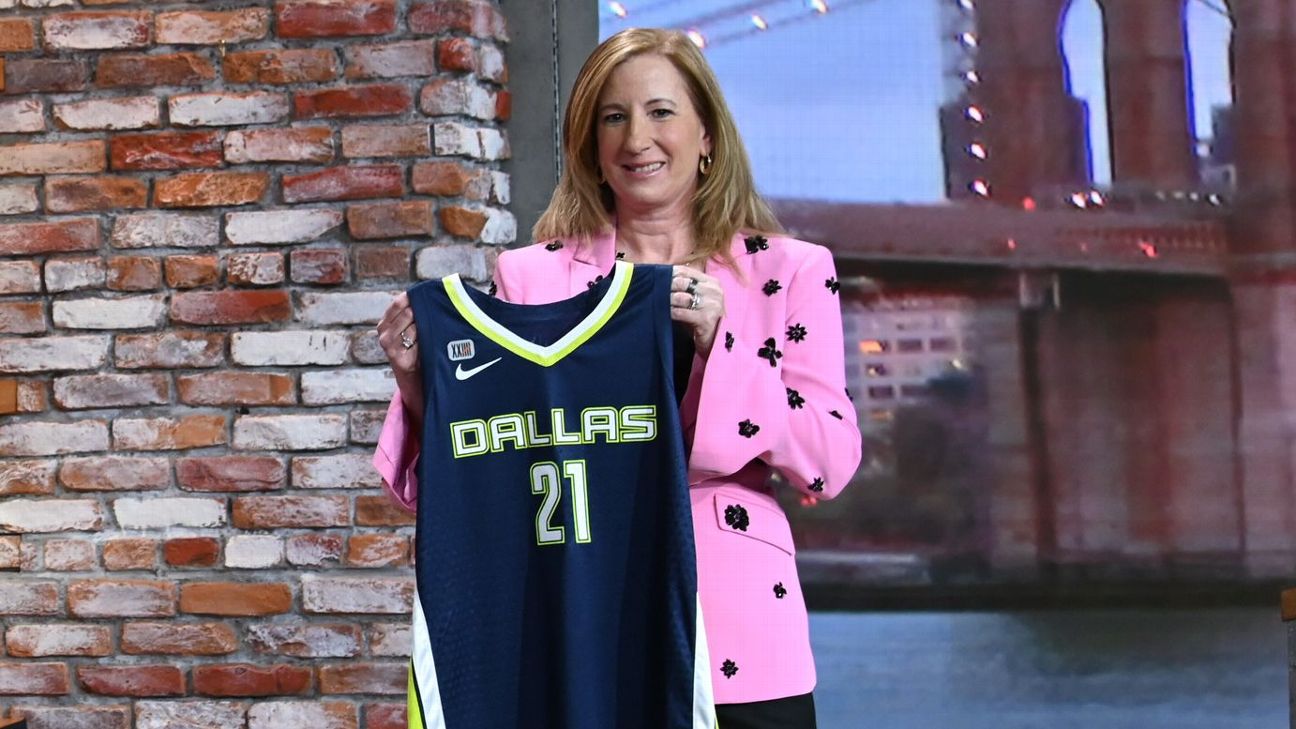 The 2021 WNBA draft might be best remembered for three things: a potential dynamic duo for the Dallas Wingswith 1-2 picks Charli Collier and Awak Kuier, teams betting on young international talent, and Indiana throwing some unexpected curveballs that will prove to be either surprisingly brilliant or way off base.

At maximum, there are only 144 roster spots in the 12-team WNBA. Not every team is expected to carry 12 players this year, though, due to contractual obligations and fitting under the salary cap, so there might be even fewer spots up for grabs. When you consider how good the rosters already are, the chances for the draftees to make it to the league in its 25th anniversary season are going to be tough for most.


We saw international players such as Kuier (Finland), Shyla Heal (Australia) and Iliana Rupert (France) go in the first round. All are 19 years old and already playing professionally. It's not uncommon for international players to be drafted as soon as they are eligible (if they are at least 20 in the year the draft is held) and then possibly wait a year before they actually join the WNBA.

We'll have to see how many in this draft play in the league in 2021, but it is pretty certain that some teams chose players knowing they're not likely to make a roster this year, but could in the future.

Here are grades for the 11 teams that participated in the draft. The Washington Mystics did not have any picks. The 2021 season tips off May 14.

We gave the Wings an A-plus grade last year, too, and then they didn't make the playoffs. Still, that haul of players and this year's group should fill out a good foundation for the Wings' future, and at least garner them a postseason berth this year.

We'll have to see how Collier and Kuier both develop as big post players -- Collier and Kuier are both 6-foot-5 -- who have high ceilings. Dungee gives the Wings another version of Arike Ogunbowale -- a guard who can always create her shot. And Evans, who some thought could be a lottery pick, seems like a second-round steal.

For new coach Vickie Johnson, the task is making all these 2020 and 2021 picks pay off.

With just one pick, it obviously wasn't a busy draft for the four-time WNBA champions, but coach/general manager Cheryl Reeve has to be happy that Davis, who seemed to have a lot of traction as a lottery pick, fell to No. 9.

Nobody is ever going to replace Maya Moore. But getting a 6-2 wing who can rebound and has good scoring potential seems like just what the Lynx were looking for.

Based on what coach/general manager Derek Fisher said he wanted going into the draft, the Sparks did pretty well. When they traded up with Dallas on Wednesday to get the No. 7 pick, Walker was one of Fisher's hoped-for targets.

But if Watts was a surprise in the first round, Guirantes was an even bigger surprise dropping to the second. There was no player whom the media projected higher but who went lower than Guirantes, so she could really be motivated.

Raca just completed a good career at Wake Forest, and Ayuso spent her lone college season at Oregon in 2017-18 before turning pro. But these players won't all make the Sparks' roster this year.

Heal has shown great promise at a young age, and it should be fun to see her learn from Courtney Vandersloot. In that sense, the Sky got exactly what they were seeking in the draft.

Getting Mack -- a potential first-rounder who led Division I in blocked shots this season -- in the second round had to be a pleasant surprise. She has a lot of upside and brings a needed defensive mindset to the Sky.

Like many of the European players, Rupert could opt to wait at least a year to play in the WNBA. But even if she doesn't play in the league in 2021, this is a good pick. The 19-year-old could be a center for the future for the Aces. Liz Cambage turns 30 in August and has missed several WNBA seasons since being drafted in 2011, so having Rupert as part of a long-range plan makes sense.

The best use of the Aces' second-round pick was on a point guard, and we'll see if Slocum can win a spot on the roster.

The Storm took Texas A&M's Aaliyah Wilson with their first-round pick at No. 11 and then traded her to Indiana for former UCLA player Kennedy Burke, who could find a spot with Seattle.

Williams gives the Storm another option at point guard, one who is a prolific 3-point shooter. Jones was a double-double machine for the Aggies and is worth a look at the pro level, as is Kucowski, who led Division I in rebounding average this season (13.3 RPG).

With no first-round picks, the Sun had to hope at least one player fell further than expected -- and that's what happened with Carrington. She was outstanding for Baylor all season, and especially showed grit and toughness during the NCAA tournament both offensively and defensively.

Coach/general manager Curt Miller was looking for some added offensive punch if possible, and Kelly (23.9 PPG) and Goodman (16.2 PPG) each led their teams in scoring this season.

There's nowhere to go but up for New York after last season's 2-20 struggle, and there's at least a chance that both Onyenwere and Richards -- who both bring great energy -- could help the Liberty. Onyenwere has to adjust to being a wing player, but she's someone who can make things happen all over the court. Richards isn't a shooter, but she was one of the best overall defenders in college the past couple of years and offensively she runs the court well and creates opportunities for others.


Higgins started her career at USC before going to Pacific and is another one of those players you think would have a much greater chance at a roster spot if the league had a few more teams.

Yes, the Dream are banking on the Aari McDonald we saw in the NCAA tournament this year being the one we'll see in the WNBA. And that the Pac-12 Player of the Year will keep getting better. But does this pick give the Dream a few too many similar guards? Or does a backcourt that has McDonald, Chennedy Carter, Courtney Williams and Odyssey Sims (among others) produce the high-octane pace that coach Nicki Collen wants?

Carrera, again like some of the other European players, might opt to wait at least a year to join the WNBA.

By adding Wilson in a trade with Seattle, the Fever ended up with seven picks in this draft -- including two whom virtually no prognosticators saw as first-rounders in Gondrezick and Wilson. Gondrezick led West Virginia in scoring this season at 19.5 PPG, so maybe the Fever are on to something that others aren't.

Thompson was a constant double-double for Auburn, and might be Indiana's best pick.

General manager Tamika Catchings and coach Marianne Stanley might have the last laugh on everybody, but the initial response to this draft is, "Huh?"

There really isn't much to grade for this draft when all the Mercury had was a third-round pick. Johnson was a stalwart inside for the Aggies, but it will be difficult for her to make the roster.

What the Mercury will be judged on is bringing in two former UConn players who were previous first-round picks, Kia Nurse and Megan Walker, in a February trade with New York for this year's No. 6 pick (the Liberty took Michaela Onyenwere) and a 2022 first-rounder. We'll see if Nurse and Walker flourish in Phoenix. 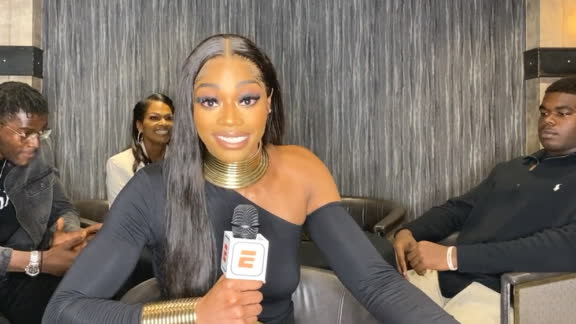 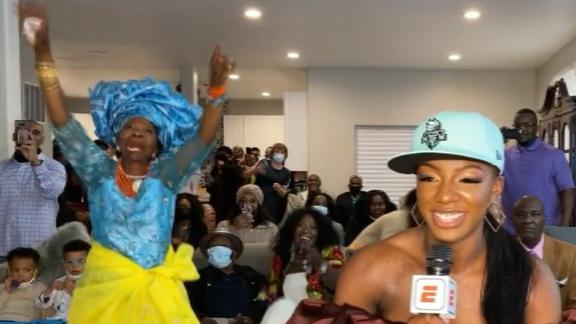 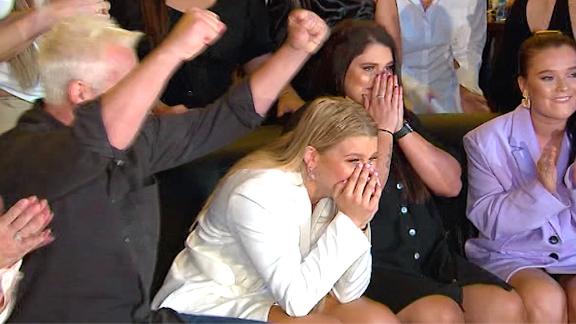 Heal: I've pictured this moment since I was a little girl
Shyla Heal shares her excitement after being picked 8th overall and believes landing with the Chicago Sky is an ideal fit. 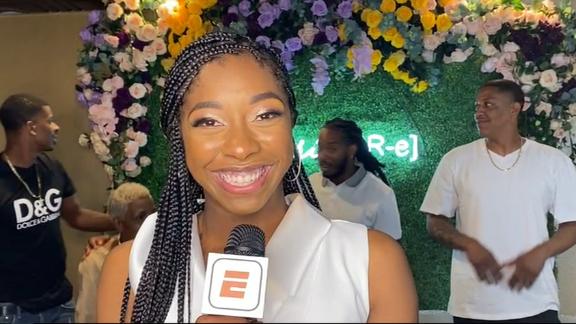 McDonald continues incredible 2021, drafted No. 3 by Atlanta Dream
Aari McDonald is selected No. 3 overall in the 2021 WNBA draft by the Atlanta Dream, making her the first player from Arizona to be drafted in the first round. 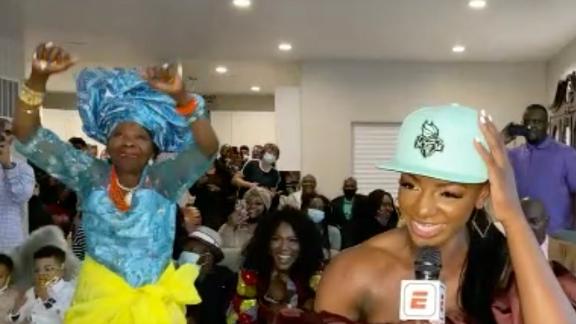 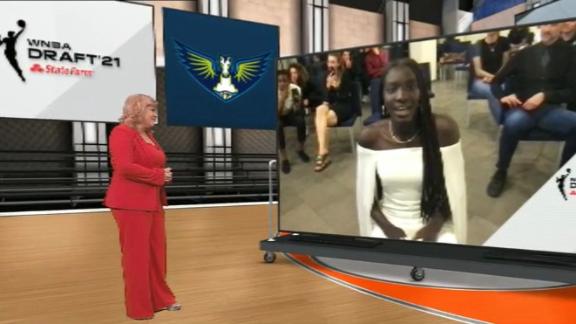