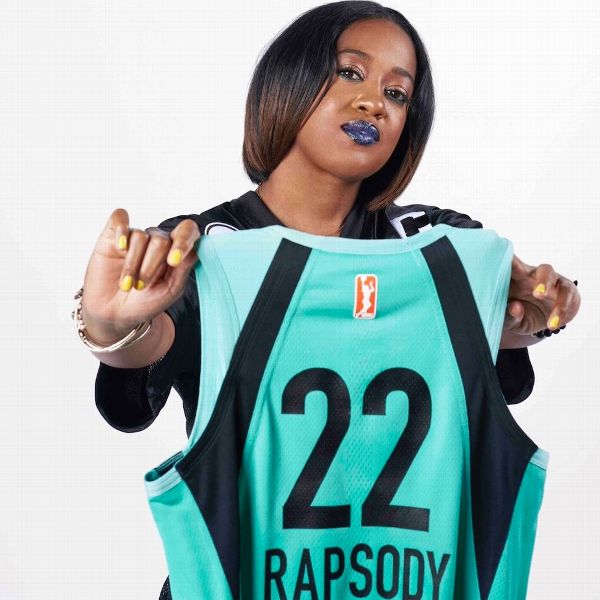 From bodegas to boardrooms to ball courts, the grit and glory of New York City is personified by one of the city's home teams, the New York Liberty. Grammy-nominated lyricist Rapsody was tasked with capturing the essence of the team in song. The result was "Liberty Loud," an anthem that moves the fans, streets and players.

"The Liberty represent the city, so the anthem had to feel like a community thing," said Rapsody, who attended NC State. "This song feels like the concrete jungle."

A casual baller who played in high school and was the captain of her middle school squad, Rapsody approaches her music as she did her game -- by putting the betterment of the team first.

For my [record] labels [Jamla/Roc Nation], I have to be there when the new guys come on," she said. "I have to be a leader and guide them through the process and show them the ropes and pass the knowledge. The same thing with the game, you have to step up and run with them."

The native of Snow Hill, North Carolina, showcased her ball-playing skills at the 2019 NBA All-Star Celebrity Game, where she was teammates with 2018 WNBA Rookie of the Year A'ja Wilson and coached by one her childhood heroes, South Carolina women's basketball coach Dawn Staley. "Staley is one of the illest to ever play the game," Rapsody said.

One of the league's original franchises, the Liberty was purchased in January by an investment group led by Brooklyn Nets minority owner Joseph Tsai from The Madison Square Garden Company. Rapsody's anthem, with lyrics such as: "Been standing for justice/we ain't just get here just now/Concrete jungle/where Lady Liberty wears the crown ..." is a part of the team's rebranding process.

Rapsody, who has been publicly celebrated by hip-hop heavyweights, such as Jay-Z, J. Cole and Kendrick Lamar, sat down with espnW at St. Joseph's College New York in Brooklyn to discuss her song, pay equity in hip-hop and pro basketball and the lessons she learned on the hardwood. The New York Liberty's first game of the 2019 season is Friday, when they'll face the Indiana Fever.

This interview has been edited for brevity and clarity.

espnW: How did you capture the energy of New York City and the New York Liberty in the "Liberty Loud" anthem?

Rapsody:I went through a lot of beats and was like, "What sounds like New York? What sounds like a game in New York City." I grew up listening to [NYC area] artists like Jay-Z, Nas, the Fugees and Queen Latifah. That music was hard and gritty. I wanted something that felt like that but was energetic enough for a basketball game.

And they sent me a list of what the Liberty stands for -- like being loud and everything they do with social justice and just being dope women. These players put on and represent their city.

I tried to put all of that in [the anthem]. But, of course, the lyricist in me put a spin on it. I threw in lines like "All three Fugees, we do score." which is a double entendre, like "The Score" album and scoring in the game.

espnW: How did you mimic the movement of the game in the song?

Rapsody: You hear these "instruments" within a live game. You hear the sounds of sneakers skirting and squeaking on the floor. And then there's the sound the basketball makes when you dribble and run, it's all in a rhythm. That's similar to a beat. When fans are cheering, they got their chants, and they're stomping and clapping, everything has a rhythm to it. I create those rhythms with my voice and with the music. Those are just ways that I try to make it feel like the game through the music.

espnW: You're a ball player and a WNBA superfan. How did your fandom develop?

Rapsody: I've been playing basketball since I was about 8 years old, and that was before the WNBA was founded. Back then, it was like, "Oh, as girls, we get to go to college and play, and it ends there." And then women like Sheryl Swoopes and Lisa Leslie come on the scene [after the inception of the WNBA in 1996] and then we have these superwomen. They were the women who made me a WNBA fan.

Those pioneers also remind me of women in hip-hop. It's no different than being a female in the music business. People box you in, and they think, "Oh, you're good for a girl." Nah, I'm good for a baller. Any one of those girls, any woman in the WNBA, can go up against any guy in the NBA. It's just skill and knowing the game.

espnW: What sports figure inspired you growing up and why?

Rapsody: Dawn Staley. The way she played basketball reminded me of what I saw in Queen Latifah. She was true to self and just the best to do it at the time. For me, they were the personifications of each other in different arenas. Dawn didn't care. It didn't matter who you put in front of her -- how tall they were, male or female -- she was going for your neck.

I got to meet Dawn for the first time when I played in the [2019] NBA All-Star [Celebrity] Game. I loved her energy. She still has that competitive spirit in her, and she loves the game.

It's like me and this microphone and these words, I'm gonna give it to you. You could tell Dawn was confident. She was a superhero and still is. I think the people she coaches know that.

espnW: Your anthem lyrics reference pay equity for WNBA players. Women in hip-hop are also fighting for parity in the music industry. What other parallels do you draw from being a woman in hip-hop and women in the WNBA?

Rapsody: I've always been like, but, "This doesn't make sense." They play harder than the men sometimes, I think, sometimes smarter. These women love and know the game of basketball, and just because they are women, they get a paid fraction of what the NBA players make. I don't understand that. They play and practice just as hard. These are women that little girls look up to, we have to show them that they're worth it. That they mean something.

And I think it took me longer to [find commercial success] because I'm female. Men don't always believe they can relate to what I talk about on a track. The same way WNBA players are told, "You play like a girl." They didn't see me as a contender. I guess you're not a challenger until you win. Just like the WNBA players can take these dudes on the court, I'll whoop them on a song. As women, our road is always tougher and harder. I may not reach all the goals and make all the money that I know I'm worth. But, hopefully, I open the door for the next women coming in.

espnW: As a woman in a male-dominated space, be it pro ball or hip-hop, how does one stay authentic while also attempting to be marketable?

Rapsody: You can't compromise yourself. You can't try to do what you think fits or might garner attention. You have to know that you're enough and worth it. I was always told, "Tell your story. Tell your truth. Be who you are because there's always somebody in this world who will be inspired by that and will see themselves in you." There's nobody else on this earth quite like you and that goes for the game, too.

espnW: You're small in stature but big in voice and spirit. Were you ever underestimated in basketball, and how about in the hip-hop game?

People always tell me, "You're short," and I always felt like I was taller. When I played ball, I'd stay after school with the top players to get better. Even in music, I always studied the greatest of the greats. I never wanted to be the best in my circle, because that doesn't help you grow. In sports, I'd play with athletes that were taller, stronger and faster. When I got on the court, I felt like I could play anybody. I would try to match up with centers sometimes and be like, "Whatchu doing? I know how to box out." If you know the game, height doesn't matter. 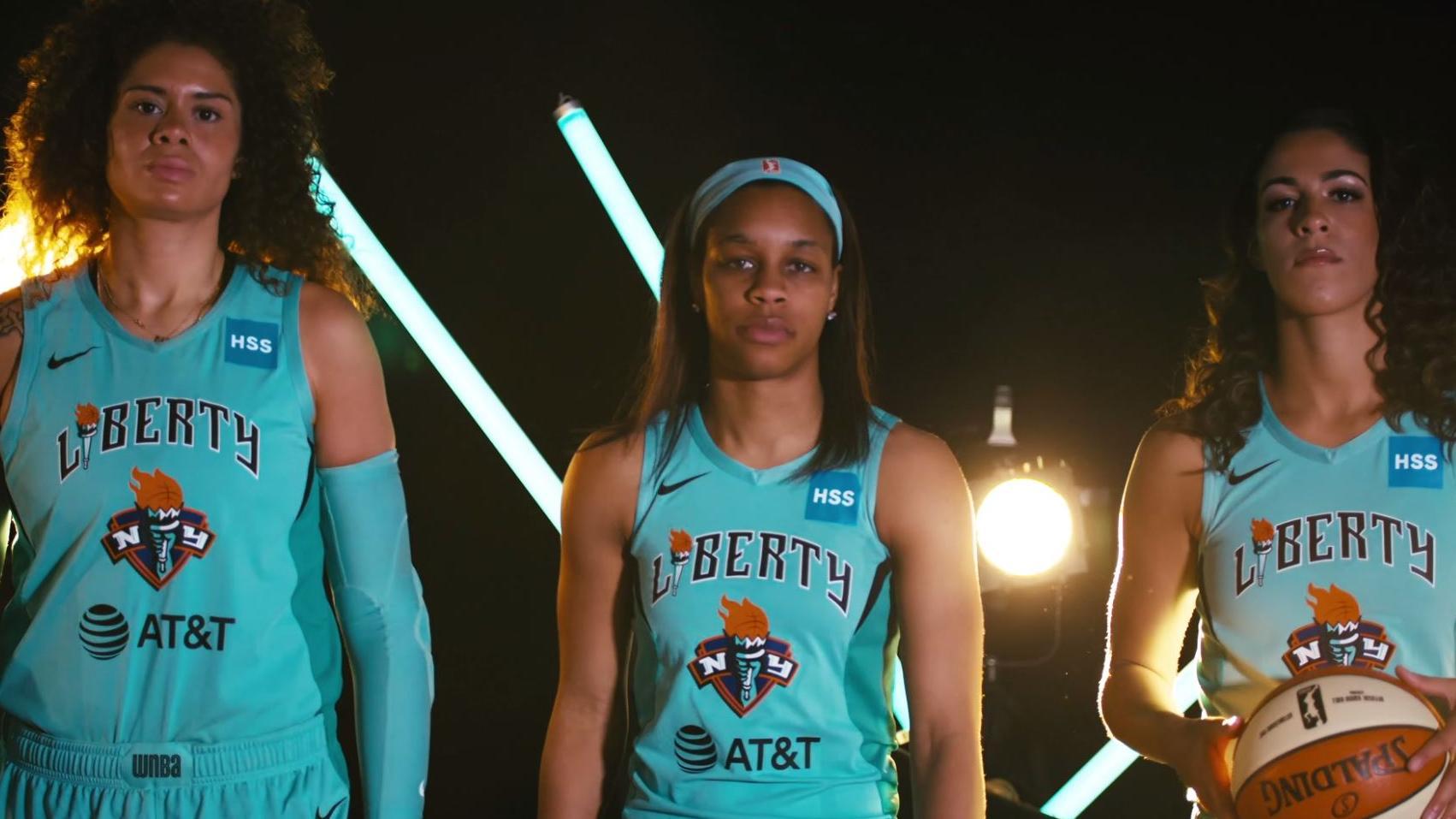