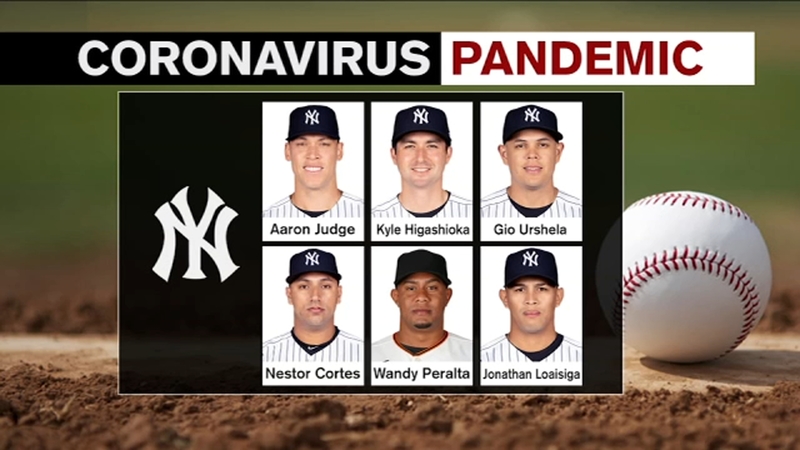 NEW YORK CITY (WABC) -- The Yankees' post-All-Star break opener against the Boston Red Sox had to be postponed because of positive COVID-19 tests among six New York Yankees players, but the teams resumed play Friday night.

ESPN's Jeff Passan reports no new positive cases have been reported since Thursday afternoon, and players underwent one more round of testing Friday afternoon before first pitch.

Following those tests, the Yankees and Red Sox resumed play Friday night. The postponement of Thursday's game will be made up as part of a split doubleheader at Yankee Stadium on Tuesday, August 17.

Judge had just played in an All-Star game in Denver on Tuesday before testing positive, raising concerns he may have exposed players on other teams.

The Yankees were the first team to hit the MLB's 85% vaccination threshold needed to relax their COVID protocols.

Despite medical evidence that vaccinated people who test positive are much less likely to get severely ill and spread the virus to others, the opener against the Red Sox was postponed out of an abundance of caution.

"I desperately want us to go back to as normal as possible but that's out of our control," Yankees manager Aaron Boone said. "We just got to do the best with our circumstances and try to make sure we're taking care of one another the best we can."

No vaccine is 100% effective, but medical experts say they are close to 100% effective in keeping people out of the hospital and dying.

Loaisiga went on the COVID-19 injured list Saturday, when the Yankees were in Houston, and he did not travel home with the team Sunday.

This was the eighth COVID-related postponement this season but the first in nearly three months. Also put off were a three-game series that had the New York Mets at Washington from April 1-4, and Atlanta's game at the Nationals on April 5, two Minnesota at Los Angeles Angels games on April 17-18, and a Twins at Oakland game on April 19.

There were 45 regular-season games postponed for virus-related reasons last year, but just two were not made up, between St. Louis and Detroit.

Despite all those vaccinations, the Yankees had more than a half-dozen positive COVID tests in May, and third base coach Phil Nevin became seriously ill.

New York players were on the field taking early batting practice about 3 1/2 hours before the scheduled start when the Yankees asked media to leave the field while the team conducted COVID testing.

Boston came onto the field as the postponement was announced to take batting practice.