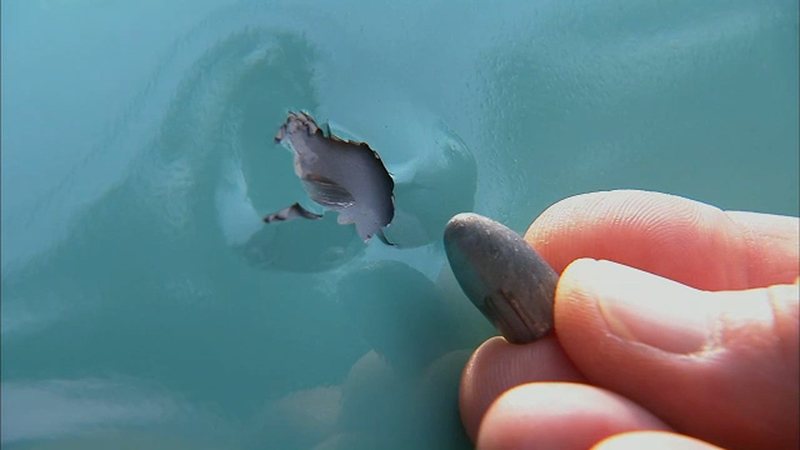 LAKE GROVE, Long Island (WABC) -- A classic car show was disrupted by gunfire, and now, a Long Island couple's 1952 Oldsmobile is in need of a new paint job.

It happened over the weekend in Ridge, and the car's owners believe the bullet came flying from a nearby shooting range.

The bullet was entirely undamaged and flecked with blue paint that matched the vintage car. Joanne Passannante, of Lake Grove, said it happened Sunday while her husband was at the car show.

"He walked over and took a look at it, and there is right on the front fender, there's a nice little dent and some damage to the paint," she said. "Thank God it was the car and not a human."

The car show took place at Fireman's Park, which is adjacent to a shooting range. Suffolk County police arrived on the scene, but the range remained open and investigators did not confiscate the bullet.

Passannante is convinced it was a stray bullet from the range, and she says more needs to be done to ensure the safety of people in the park.

"If you're going have a gun range, whatever is in the vicinity of it needs to feel fairly safe that they're not going to also get hit," she said. "If it did that to a car, it would really really do damage to somebody."

Her 10-year-old son Dominic was there when it happened, and he isn't ready to go back anytime soon.

"It could've been someone that got hit, so that was scary," he said. "I was just scared to stand in one place...Since that happened, it might happen again. And it might hit someone next."