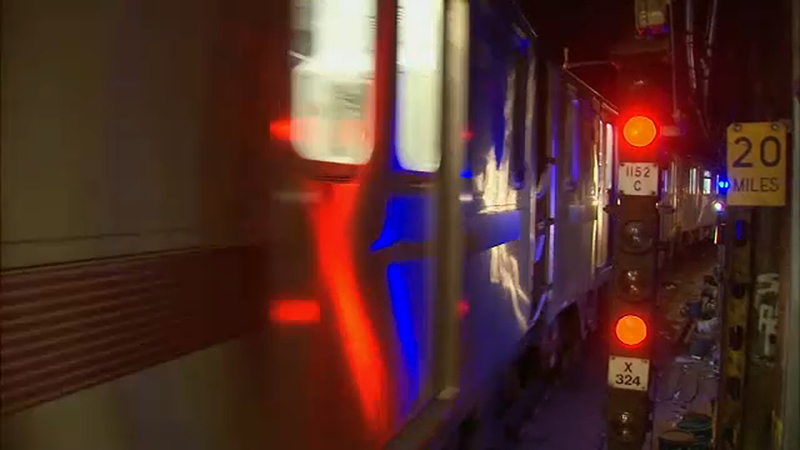 CAMBRIA HEIGHTS, Queens (WABC) -- A subway motorman is being hailed as a hero for his actions in saving a man on the tracks of a 7 train in Queens.

In a word, Louis-Mark Perry was stunned. His 7-train was rolling into a tunnel in Long Island City, Queens when he spotted a well-dressed man wedged up against the wall. The bizarre scene was posted by a rider on Twitter.

Perry couldn't believe the man wasn't crushed. He says he slammed on the brakes, then climbed down onto the tracks himself, determined to keep the man from being electrocuted.

"In the heat of the moment, my biggest concern was trying to save him," said Perry. "My biggest concern, after realizing that we did not hit him, was that he was going to get electrocuted."

It took patience and persuasion and a little bit of luck. But after several tense minutes, Perry managed to convince the man to climb up from the tracks, and into the train's lead car.

"Once he got up into the train I told him, 'I don't know if you're married or if you have kids," Perry said. "But if you do, you need to go home and hug your wife, hug the kids and be thankful you're alive. Because you really, you really could have been killed."

The man remained on the train and was met by EMS teams at Grand Central. Perry says he later learned the man suffers seizures and was disoriented.

'I think he was so out of it that he had no idea the dangerous situation that he was in," said Perry.

More than 900 people fall onto or wander onto the subway tracks every year. And Perry knows it doesn't always end this way.

"Just by the grace of God, I'm glad I was in a position to help him," he said.