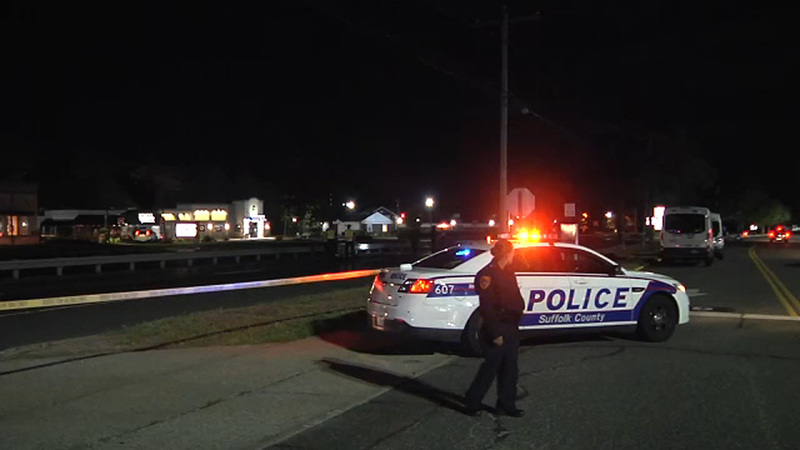 PORT JEFFERSON STATION, Long Island (WABC) -- Police are searching for a hit-and-run driver after a teenager was killed crossing a busy highway on Long Island.

The crash happened around 9:25 p.m. Saturday on Nesconset Highway in Port Jefferson Station.

Suffolk County police say 17-year-old Jenna Perez, of Selden, had just left her job at Five Guys and was crossing the roadway about 300 feet west of Terryville Road when she was struck by a vehicle believed to be traveling westbound.

That vehicle kept on going, and Perez was pronounced dead at the scene.

Five Guys co-owner Bill Gellert said Perez was an exceptional teenager with a great work ethic who enjoyed her job and was dedicated, responsible and always willing to pick up extra shifts

He said he feels terrible for what happened, and that Perez had a twin sister who also works at the location.

Friends say Perez died just days from her 18th birthday. She was about to begin her senior year at Newfield High School in Selden, where a vigil is being planned in her honor.

"I'm just a little baffled, and I haven't been right ever since I found out," friend Teasia Jefferson said. "You feel somebody when you hit them, like you know, you're very aware. And then you're just going, and you're like, 'I don't care'? No. I'm sorry. It hurts so bad."

Police are appealing to the public for help.

"As of Saturday, we've gotten a number of tips that have come in that we are looking at currently," Suffolk police Detective Lieutenant Gail Marrero said. "We're hoping that someone will call."

Police are studying auto parts recovered from the scene in an effort to help locate the car and the driver. They have not yet released a description of the vehicle.