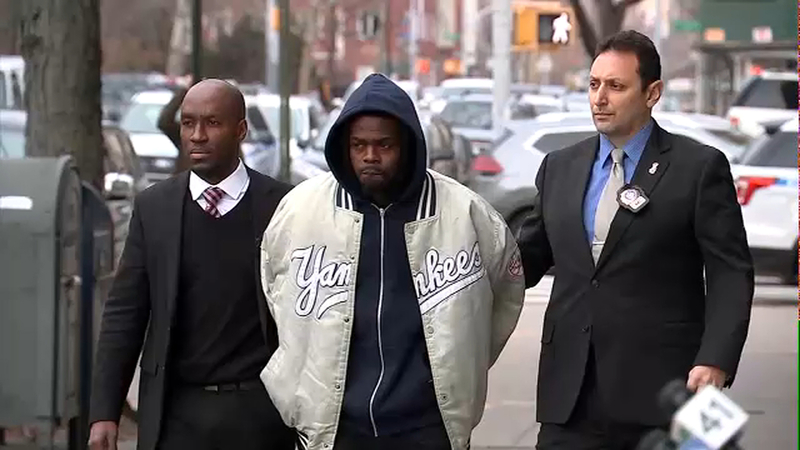 BEDFORD-STUYVESANT, Brooklyn (WABC) -- Police say the suspect in a vicious attack at a NYCHA building in Brooklyn is under arrest.

The NYPD was searching for 31-year-old Lytee Knox Hundley after an out-of-control verbal argument turned violent.

Hundley turned himself in to police at the 79th Precinct Sunday and was charged with assault.

The attack took place Friday at a building on Tompkins Avenue in Bedford-Stuyvesant, and was streamed on Facebook live, while callous laughter rang out in the background.

One witness made a half-hearted attempt to intervene, but it wasn't enough to prevent the suspect from throwing nine punches and eight stomps to the 62-year-old man's head. Police identified the victim as Wilfredo Arce.

A man was brutally beaten at a NYCHA building in Brooklyn.

On top of the attack, the suspect spit on his helpless victim.

Naveen Dhaliwal has the latest on a beating at a NYCHA building.

Police said they knew who they were looking for, and NYPD Chief of Detectives Dermot Shea tweeted an image of Hundley.

Brutal attack on an elderly male. Our communities will not stand for this and neither will the #NYPD @NYPDHousing @NYCHA.

The chief added that the NYPD and the community won't stand for it.

Arce was rushed to Woodhull Hospital, where he was treated for a fractured nose and a fractured orbital bone.

Police say the suspect has two prior arrests, including robbery.