Names released of all 11 victims of Pittsburgh synagogue shooting

Names released of all 11 victims of synagogue shooting. Watch the report from ABC News' Maggie Rulli on October 28, 2018.

PITTSBURGH, Pennsylvania -- Officials released the names of all 11 victims of the Pittsburgh synagogue shooting during a news conference Sunday, all of them middle-aged or elderly.

Fellow members of the New Light Congregation say Melvin Wax was a pillar of the congregation, filling many roles there. Friend Myron Snider says Wax was a retired accountant who was unfailingly generous.

Authorities say gunman Robert Bowers made statements about genocide and killing Jewish people. Bowers is being treated for gunshot wounds and is due in court Monday.

Bowers killed eight men and three women inside the Tree of Life Synagogue on Saturday during worship services before a tactical police team tracked him down and shot him, police said in an affidavit, which contained some unreported details on the shooting and the police response.

The nation's latest mass shooting drew condemnation and expressions of sympathy from politicians and religious leaders of all stripes. With the midterm election just over a week away, it also reignited a longstanding and bitter debate over guns.

"In reality, all of us are wounded by this inhuman act of violence," he said. He prayed for God "to help us to extinguish the flames of hatred that develop in our societies, reinforcing the sense of humanity, respect for life and civil and moral values."

German Chancellor Angela Merkel's spokesman quoted Merkel on Twitter as offering her condolences and saying that "all of us must confront anti-Semitism with determination - everywhere."

German President Frank-Walter Steinmeier wrote in a condolence message to President Donald Trump that "this abhorrent crime reminds us all to do what is in our power to advocate against hatred and violence, against anti-Semitism and exclusion, and to counter with determination those who incite them."

Trump on Saturday said the outcome might have been different if the synagogue "had some kind of protection" from an armed guard, while Pennsylvania's Democratic Gov. Tom Wolf, up for re-election, noted that once again "dangerous weapons are putting our citizens in harm's way."

Calling the shooting an "evil anti-Semitic attack," Trump ordered flags at federal buildings throughout the U.S. to be flown at half-staff in respect for the victims. He said he planned to travel to Pittsburgh, but offered no details.

In the city, thousands gathered for a vigil Saturday night. Some blamed the slaughter on the nation's political climate.

"When you spew hate speech, people act on it. Very simple. And this is the result. A lot of people dead. Senselessly," said Stephen Cohen, co-president of New Light Congregation, which rents space at Tree of Life.

Information from The Associated Press was used in this post. 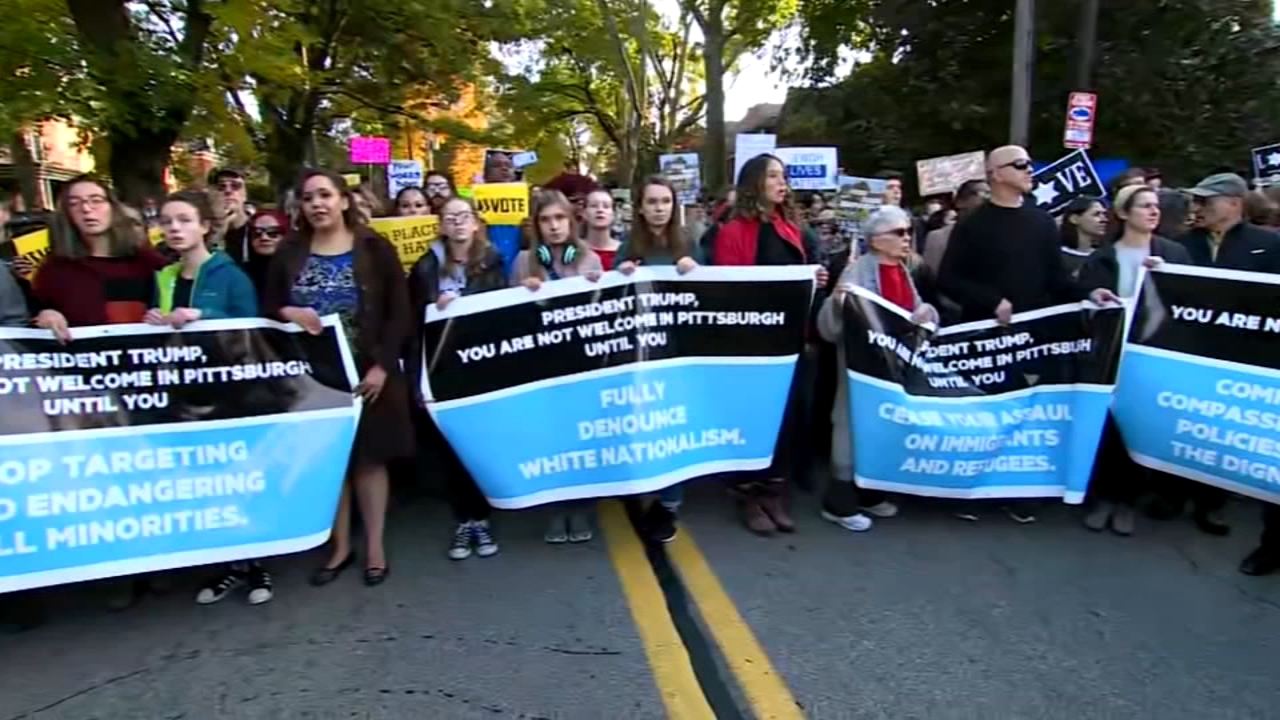