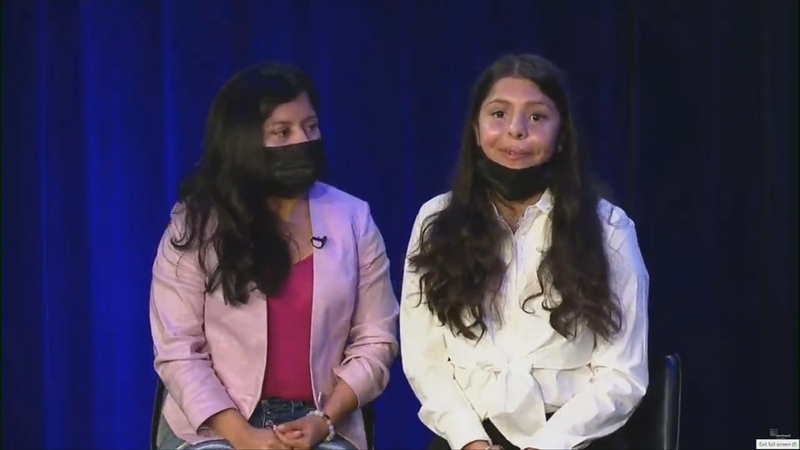 BRIARWOOD, Queens (WABC) -- A teenager living with facial differences after she was born with a rare condition spoke out following her recovery from a recent life-changing surgery.

Contreras was born with a rare and severe cleft palate and lip, known as a Tessier #4 Craniofacial Cleft, as well as facial differences in her eyes and nose.
EMBED More News Videos
She had her first corrective surgery when she was just five months old and has endured more than 20 surgeries in her lifetime.

Contreras had her last surgery in 2017, but afterward she said she "felt like my face was worse than what I began with."

"I felt really insecure with my facial differences and I felt odd with other people around me. I felt like I did not belong with my fellow classmates, especially, as well as with my teachers and professors at school," Contreras said.

She described Dr. Bradley as a "gift from God" and the procedure he carried out as "life-changing."

"Dr. Bradley gave me the confidence to walk with my head up high around campus and to be just like an ordinary kid studying and focusing on school," Contreras said.

She is currently studying electrical engineering at New York University.

Contreras said she has dealt with a lot of bullying throughout her life because of her appearance.

She wants to let the world know that under all the surgeries and the make-up, facial differences do not make people defective.

"To those who are in the same boat as me, I would just like to let them know that they are not alone," Contreras said. "It's okay to feel insecure about yourself and not have the confidence to tell your story, but it's normal and everyone should be more kind to one another especially those who may not look the same as you."