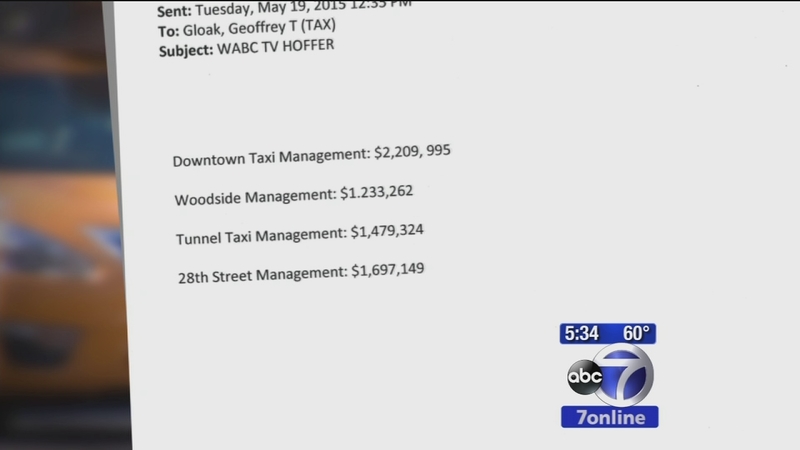 NEW YORK (WABC) -- Millions of dollars are owed in back taxes by a taxi company owner who is worth a fortune. So why hasn't he paid it? And why hasn't the state or the Taxi and Limousine Commission come after him for it?

It's an Eyewitness News exclusive.

In the cab businesses, it doesn't get bigger than Gene Freidman. But the Eyewitness News Investigators have discovered that the influential taxi tycoon has a growing tax problem, and that the agencies empowered to enforce payment simply are not.

Freidman owns more taxi medallions than anyone in the city, and they have made him a rich man worth tens of millions. Some of that money even helped get Mayor Bill de Blasio elected, and he's even credited with helping the mayor and Police Union mend fences.

But our investigation found that the wealthy peacemaker is also a tax delinquent. Warrants we uncovered in the county court show his businesses owe millions in unpaid taxes.

The investigation has found that his taxi companies actually owe a combined $6.5 million in back taxes, interest and penalties, making them among the state's top tax delinquent businesses. It is money that the state says he collected through a 50-cent surcharge on every taxi ride that is supposed to help fund the MTA.
Hoffer: "This is money that goes to MTA, subway, and they need all the money they can get."
Freidman: "You should be ashamed. You have not done your homework."

Hoffer: "You should just pay your taxes."
Freidman: "This is second time ABC has not done homework."
Hoffer: "Yes, we have. We are very certain you owe."

It is the second time we've confronted the taxi tycoon. Seventeen months ago, we reported that he owed $3 million in back taxes after we found bags of unpaid warrants tossed out in the trash near his Manhattan headquarters. Back then he challenged us.

Hoffer: "Why don't you pay what state says you owe?"
Freidman: "If you showed me, I'll pay it tomorrow."

So this time, we brought the proof, including state documents that show he now owes $6 million, twice as much as last time. Yet, he still had the same response.

Hoffer: "I showed you the warrant numbers, communications with the state. Showed you the list. Three things, how can you be in denial?"
Freidman: "I'm not in denial."
Hoffer: "You're in denial, or you're spinning us."

But it is not a matter of whether he owes. There are dozens of unpaid tax warrants on file dating back several years. The question is why hasn't the state or the Taxi and Limousine Commission taken action? TLC regulations prohibit the commission from renewing taxicab licenses when taxes are not paid.

"Something is wrong here, the system is not working," said Dick Dadey, who heads the watchdog group Citizens Union. "It's outrageous that a taxi operator is permitted to collect these taxes from New York riders and not give them back to the state to fund public transportation."

And as his tax debt grows, his story stays the same.

"Like I said the last time," he said. "You give me a bill and warrants, and I will pay them tomorrow."