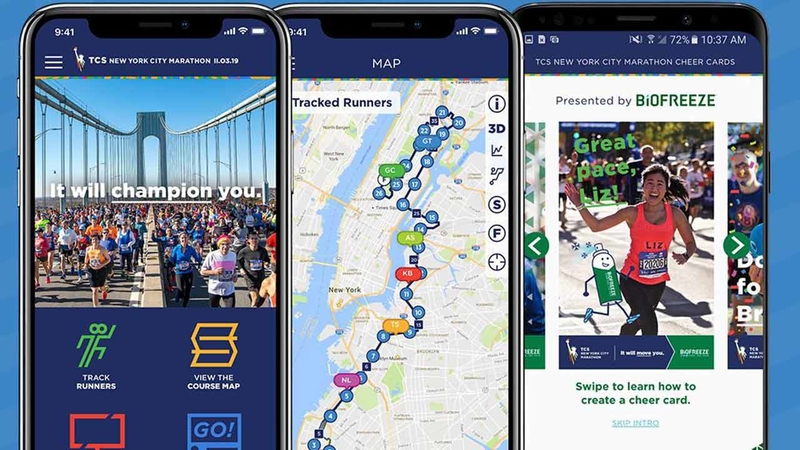 NEW YORK CITY (WABC) -- Spectators and participants will have the ability to track their runner's or own mile-by-mile through accurate and precise tracking technology during this year's TCS New York City Marathon on November 3.

Augmented reality will be integrated into several experiences to surprise and delight runners leading up to and during the marathon. Runners will have the ability to unlock special messages on their race bib from 2017 TCS New York City Marathon champion Shalane Flanagan. Additionally, weeks ahead of the race a giant 16' x 39' mural with augmented reality features was erected in Brooklyn to excite fans and celebrate the five boroughs.

"Working together with our partners at TCS, we continuously aim to make the TCS New York City Marathon the most technologically advanced race in the world," said Michael Capiraso, president and CEO of NYRR. "We are excited to bring these new features and augmented reality to create an interactive experience as well as stay at the forefront of utilizing technology in our industry."

The following are enhancements leading up to and during the race:

App Enhancements
--Mile-by-Mile Tracking: Spectators will be able to track their family, friends, pro athletes, and celebrities at each mile of the race through the app. This enhanced tracking will create the most accurate opportunities to catch runners on the course. Post-race, the tracker will allow runners and fans to review and analyze their mile splits - including every mile starting at mile 3, in addition to 5K splits.

--Share Tracking: This new 'feature on the Runner Details page allows users to share a link that initiates an automatic app download with a specific runner already selected to be tracked during the race.

--Optimized Spectator Guides: The app's spectator guide helps fans create an itinerary to navigate New York City, so they're able to see runners on the course. The shareable guide provides a runner's estimated times of arrival, along with transportation directions and recommended viewing locations along the course.

--Cheer Cards Presented by Biofreeze: Cheer cards allow fans to support runners using the app to share messages on social media. Additionally, cheer cards will be posted on screens along the course for runners to see their personalized messages.

--Live Pro Athlete Leader Board and Bios: Closely track the race-day leaders in real time, as well as have access to bios, records and images of professional athletes running the race.

--Race Predictor: Based on previous training trends provided by runners, the app will calculate anticipated finishing times for each runner.

--Runner Race Numbers: By scanning the Tata Consultancy Services logo on the top of their race bib with the AR feature of the app, runners can unlock special messages, tips and words of encouragement from 2017 TCS New York City Marathon champion, Shalane Flannagan. Unique messages will appear daily from Thursday, October 31 through Monday, November 4.

--Mural: To excite fans, a giant 16' x 39' mural in Williamsburg, Brooklyn, at the corner of North 10th Street and Wythe Avenue, was created by Brooklyn-based artist, Adam Koon, to celebrate the iconic course and the city's five boroughs. AR tags are embedded in the mural, bringing the marathon artwork to life with fun race facts.

--TCS New York City Marathon Program: The mural artwork has also been used on the front cover of the program magazine and will offer the same interactive AR experience for runners and NYRR members.