Pandemic holiday travel 2.0: How to navigate Thanksgiving this year

While air travel is way up, the vast majority of travelers will still go by car, according to AAA.

With the holiday travel season upon us, here are expert tips for minimizing hassle and maximizing safety while traveling during a pandemic.

PHILADELPHIA -- Traveling for Thanksgiving this year is going to look way more like 2019 than our first pandemic holiday season: crowded.

On Friday, the Transportation Security Administration screened more air travelers in a single day than on any day since the start of the pandemic.

US travel organization AAA predicts Thanksgiving travel overall will rebound to near pre-pandemic levels, with 53.4 million Americans expected to travel for the holiday -- a 13% increase from last year.

That brings the total travel volume to just 5% below AAA's 2019 figure. And air travel is expected to be up 80% from last year, bringing it to just 9% below 2019. About 4.2 million travelers are expected to fly this year.

With recent operational meltdowns at Southwest and American Airlines top of mind, plus staffing issues and an uptick in international travel, many air travelers worry that things could get messy.

"This year, folks are understandably more nervous than ever," Orlando said, with the recent mass flight cancellations giving travelers pause. But he said airlines are making adjustments to head off potential issues, and he would be surprised to see the kind of "major failures" that have unfolded in recent months.

"Unless we get the perfunctory snowstorm over Chicago O'Hare, over Atlanta over the holidays, I don't think we're going to have much of a problem at all," Boyd said. "It's going to be busy, but it's not going to be necessarily total chaos like some folks are projecting."

While early forecasts looked iffy, the National Weather Service now sees "a relatively tranquil stretch of weather" across most of the US mainland through Wednesday night.

While air travel is way up, the vast majority of travelers will still go by car, according to AAA, with 90% -- 48.3 million -- expected to drive.

And highway traffic and busy airports are just the beginning. There are also health issues to wrestle with and the safety of gatherings once you get there. With the holiday travel season upon us, here are expert tips for minimizing hassle and maximizing safety while traveling during a pandemic:

TSA expects to screen more than 20 million people at airport security checkpoints nationwide over a 10-day period that starts Friday and lasts through the Sunday after Thanksgiving. (AAA's forecast looks at the Wednesday to Sunday period.)

"I wouldn't say there's any worry because we planned for this for months in advance," TSA Administrator David Pekoske told CNN's Pete Muntean. "We have a lot of data, we work very closely with the carriers and the airports, so we know what to anticipate and then we staff to the volumes that we expect to see."

The TSA anticipates the Sunday after Thanksgiving will likely see the highest numbers thanks to a rush of travelers returning home, but they will probably not reach the all-time record set on the same day in 2019 when 2.9 million people were screened at airports.

"So we're telling people, look, you're going to find lines at the airport. It's just inevitable. So get there that old-fashioned at least two hours early. And if it's an international flight, three hours early."

The possibility of major disruptions should be a consideration, and AAA recommends travel insurance.

"Get that trip insurance and that airline insurance if you can. That little box you often skip, click it this year because we don't know what staffing levels are going to be like for the airlines and for TSA," Gross said.

Insurance coverage can generally be purchased up until the day prior to a traveler's departure, according to travel insurance comparison site Squaremouth.

Other tips for flying:

-- Fly early in the day to avoid the cascading effect of delays and cancellations. Bad weather is also more likely to affect later flights

-- Try the airline website or app to get rebooked if your flight is canceled. It's usually faster, according to Kathleen Bangs, a former airline pilot and spokesperson for FlightAware

-- Book nonstop flights offered several times a day on major carriers to up your odds of getting rebooked on the same itinerary in a timely manner, Orlando said

-- To be really safe, book a backup flight

"Personally, I often buy two tickets, and the second ticket is kept as a back-up reserve," said FlightAware's Bangs.

She makes sure the second flight is refundable or reusable, and that it's at least two hours later than the first so she has time to make it if the other one is seriously delayed or canceled.

With so many people vaccinated, AAA's Gross is expecting roads to feel like a typical Thanksgiving: "Crowded. Busy."

"If you leave Wednesday afternoon before Thanksgiving and you live near a big metropolitan area, you're going to be sitting in that old-fashioned traffic again," Gross said.

Average gas prices are about $1.30 higher than last year. "But as we've always discovered, no matter how much gasoline prices are, people are still going to take that trip. They'll just budget along the way," Gross said.

-- Make sure your vehicle is ready. AAA suggests getting key components like the battery, fuel system, tires, brakes and fluid levels checked

-- Mornings over the holiday weekend are generally better times to drive. Wednesday's best time is after 9 p.m., according to transportation analytics firm INRIX. Wednesday's worst time is between noon and 8 p.m.

The CDC still recommends delaying travel until you are fully vaccinated.

For those traveling with unvaccinated people, the agency suggests safer options such as road trips with few stops and direct flights.

Traveling with children who are unvaccinated will be a consideration for many families.

"This risk is not so much the travel itself but what you do at the destination," said Dr. Leana Wen, a CNN medical analyst, emergency physician and professor of health policy and management at the George Washington University Milken Institute School of Public Health.

"Travel itself can be made very safe, especially if the younger children are able to mask. If they're unable to mask, that is a major barrier," said Wen, who is also author of a new book, "Lifelines: A Doctor's Journey in the Fight for Public Health."

If she were traveling only with her 4-year-old son, who is used to masking at preschool, Wen said she would feel very comfortable taking him on a short flight. However, she would not travel on a plane or train with her daughter who is 1 1/2, because she can't consistently mask.

People should be wearing a high-quality mask -- N95, KN95 or KF94 -- anytime they're in crowded indoor settings with people of unknown vaccination status, she said.

Gathering safely when you get there

The vaccination status of everyone else is key when you have unvaccinated children in the mix.

"If you are planning to see relatives who are all vaccinated and be outdoors or around other people known to be vaccinated, that's much lower risk than if you're planning to be in indoor crowded spaces with people of unknown vaccination status," Wen said.

If the gathering involves immunocompromised family members or unvaccinated children, or both, Wen suggests that everyone quarantine for at least three days before getting together and taking a rapid test just prior to seeing each other.

"That would reduce the risk for everyone," she said. And those eligible for booster shots should get them, Wen advised.

"If you're a very impatient person, stay home now because you really have to kind of go with the flow."

Southwest pilots, others to get bonus pay for working during meltdown 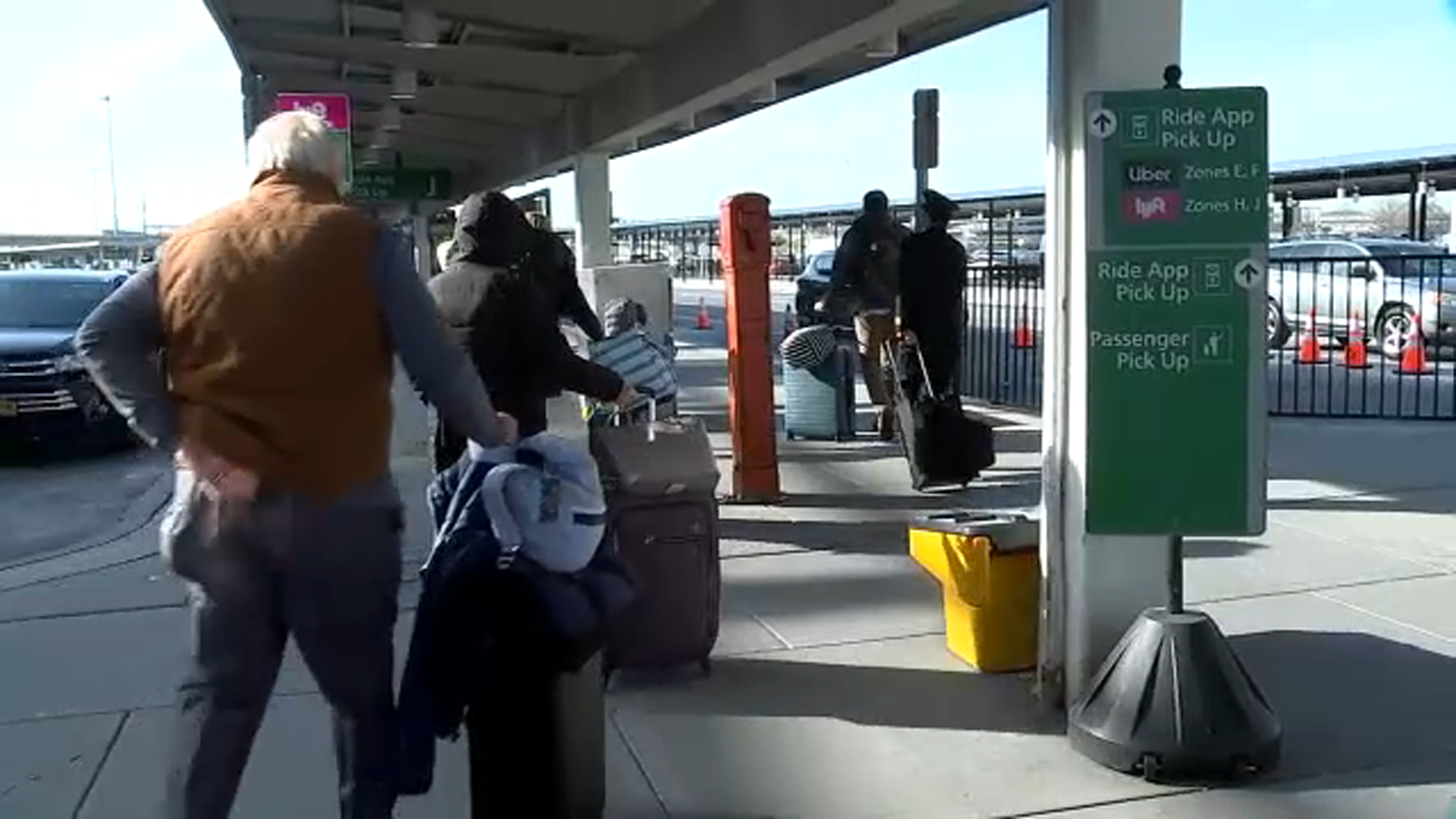