'Bachelorette' Hannah reveals who was in the Fantasy Suite windmill 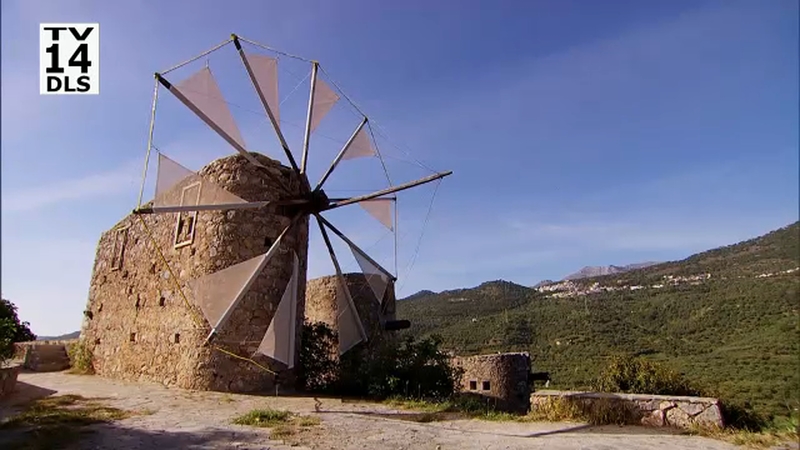 'Bachelorette' Hannah spends the night with Peter in the Fantasy Suite

NEW YORK -- This is the week we've all been waiting for. The previews have been pumping this up since the beginning. It's Fantasy Suite week!

Hannah flat out said that if her date with Peter went well, they would "get down" in the Fantasy Suite later that night. They started their day by sailing on a boat and exploring the sights of Crete. Peter and Hannah made out on the boat and he still said "like" instead of "love" with her.

Later, they met up for a romantic dinner and a serious talk about where they stand. Peter said that he feels they solidly progress and then he took a deep breath and told Hannah a longwinded story about how he arrived at his conclusion, but he finally had to let her know that he was "in love" with her. "I love Hannah Brown," he said to her. She pulled out the Fantasy Suite card and they both quickly agreed that they would like to stay there together. They walked to a windmill, and that's where the fantasy suite was! Peter is the windmill guy! They opened a chest inside the room and there were condoms inside of it. Hannah joked because she had found some in his cars before, and Peter laughed and said that he didn't put them there. The next morning, they couldn't have been happier with how things went and Hannah called him "loving and passionate." Peter called the night the best night of his life. He said he feels secure that Hannah is his now and the other guys don't stand a chance.

Tyler had to follow that steamy date with Peter. Hannah took Tyler to a spa where they had a couple's massage. They talked about their time in Jupiter, Florida visiting his family. Hannah told him that she loved his family, especially his brothers and how much fun they were. Tyler told her that he wanted to pounce on her, but then he sneakily got up and had the massage ladies give him some oil and he started massaging her. She right away felt that she had man hands on her. Hannah told him that he makes her blush. She said that being physical isn't a problem for her with Tyler, but she wants to get their emotional side to catch up.

At dinner, they talked about how great their date was earlier. Tyler told Hannah that their dates have all been simple and he can picture a life with her. He was very honest about his intentions and wanting to be with her. Hannah drove home the point about wanting to get to know him emotionally. She added that she's concerned at how much she wants him physically because she wants to make sure there's more. Hannah flat out told him that their relationship doesn't need sex, she said it's very easy for her to want to do that, but she wants them to use that time to build their emotional connection. Tyler said that he just wants to be with her and he wants to honor her boundaries. He told her he loves her and that she means the world to him. They boarded a boat and that was their Fantasy Suite! It was gorgeous! The next day, Hannah gushed about what a respectful man Tyler is and how he treated her better than any man in her life. Tyler also called the night one of the best of his life. He's amazing!


Jed went into his date with Hannah trying to push the fact that the last rose ceremony came down to him and Luke. He wanted to keep their relationship about them and not let Luke ruin it. A local family invited them over to their home to share in their local traditions and have a meal. Hannah and Jed did a lot of kissing in front of this poor family! It was like they were a part of "My Big Fat Greek Wedding." As the family was asking Hannah how she would decide, Jed pulled her aside - shocking Hannah. He asked her for clarity on Luke and why she is keeping him around. "How honest do you want me to be?" Hannah asked. She then told Jed that Luke grabbed her attention and she thinks that his family reaffirmed that he's there for her. She said she is still trying to figure out the connection though. She got very flustered.

.@AlabamaHannah isn’t afraid to let it out 🙅‍♀️ #TheBachelorette pic.twitter.com/cop5WOJV9o

That night, the awkward conversation continued. Hannah thanked him for sharing his feelings about Luke and she did see it as him coming from a good place. She asked him to let her figure it out. Jed said that Hannah's decision to keep Luke around is weighing on him a lot and it does affect the way he feels about her. Hannah got very frustrated. "It makes me worried that you have a hard time letting go of things that aren't good for you in your life," Jed said. He added that it makes him worried and it makes him retract the way he feels. She walked off and Jed followed. They eventually sat back down and Jed apologized and said it's just because he cares about her.
They decided not to let the conversation about Luke ruin their evening and they moved on into the Fantasy Suite. She didn't tell him about any sex restrictions. It makes you wonder why she was doing that with Tyler. Was it the reason she said, or is she trying to distance herself? The next morning, they woke up kissing in bed and Jed called it "the best night ever." Hannah said it was a little wild and a lot of fun. Wow.

Hannah took Luke to Santorini on a helicopter. They had a great time admiring the views. They strolled through the streets, shopped and admired the views. Hannah said that he's still the best teacher. "I don't know what his church is teaching him, but that boy can kiss!" Hannah said. She added that Luke's eyes look into her soul.

That evening, Luke started things off very positive and thanked her for including him on the Santorini visit because it was on her bucket list. Then he segued into talking about marriage and how forever shouldn't be taken lightly. He started talking about the things he wants out of his future wife. Luke said that he's a spiritual leader in his household, and he wants to "make things known how they are supposed to be." Then he started talking about sex in marriage and how "the marriage bed should be kept pure." Luke added that he's saving himself for marriage and he thinks that they are on the same page there. He wanted to make sure that she wouldn't be sexually intimate with the other relationships there. "If you told me you had sex or wanted to have sex with one or more of these guys I would be wanting to go home, 100%," Luke said.

Hannah said she doesn't agree with some of the things he said and she's mad because he has no right to question her at this point. He told her again that he loves her, but said that he is willing to work through the fact that she's had sex with other men. Hannah then said that she had the closest thing she's ever felt to "love at first sight" with him, but he's continually broken her heart and red flags have popped up and now he's making her feel like she's judged. It was amazing seeing the light bulb go on in Hannah's head with Luke.

Hannah then quoted the Bible at Luke and told him that she's not perfect, but he hasn't shown her respect, the guys respect, or himself respect. Hannah said that she knows she gave the relationship her all, but she does not want Luke to be her husband. Luke refused to get up for a while and then Hannah said, "It's over, come on." Then he said that she "owes" him the chance to say more, and she told him she doesn't owe him anything. He said he didn't want to get in the limo - so she told Luke that she had sex. She then added that she *bleeped* in a windmill. Off-camera she said that she did it twice. HA! Go on Hannah! They stared at each other, Hannah willing him to get in the limo, and Luke then asked if he could pray with her before he leaves and Hannah said, "No!" He finally got inside the limo and cried as Hannah gave the vehicle the finger as it drove away. She's a woman who finally knows what she wants. Luke cried in the car as it drove away.