4 men, 4 hometowns, 4 roses from Hannah on 'The Bachelorette' 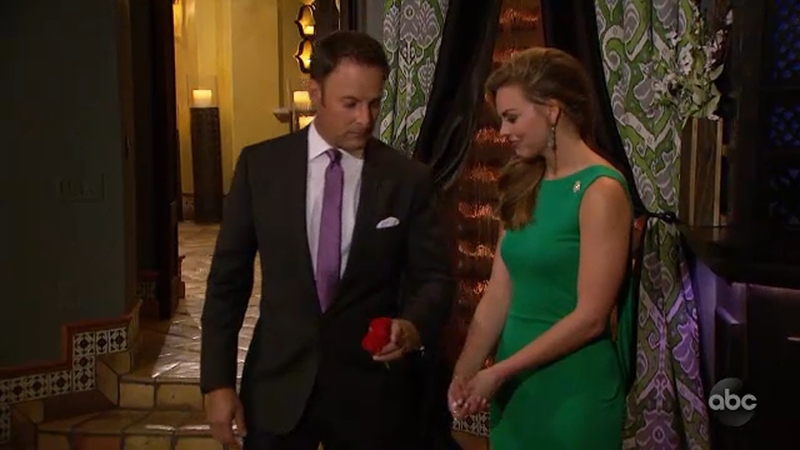 Jed accepts rose, but is upset that Luke got one too on 'The Bachelorette'

NEW YORK -- We got to meet the men's families this week on "The Bachelorette" during Hannah's visits to their hometowns.

Peter's Hometown Date
Hannah started in Westlake Village, California to visit Peter's family. They met up in a park and he took her to a parking lot where his Mercedes Benz was waiting. Hannah immediately went through his car to see what she could find. What did she discover? A condom! Peter was so embarrassed. He said he practices safety in flying and "other stuff too." He drove to an airport and asked Hannah to be his copilot! This was a great chance for him to show off all of his most attractive qualities. He even flew her over Bachelor Mansion! If that wasn't enough, they flew over his parents' home where they were standing in the street and waving to them. Now that's an amazing date!

Hannah met Peter's father, mother and brother and they were all so gracious to her. They seem like such a sweet family. They started their meal with a German prayer that was very boisterous and then they ate some delicious Cuban food. Peter got choked up as he gave a toast and mentioned how much his grandparents would have loved Hannah. During her private chats with his family, she told his brother that they haven't said that they love each other yet, but they are on track to do so. Meantime, Peter gushed about his love for Hannah to everyone in his family. His mother Barbara is just a gem of a woman. She deeply wants Peter to find his true love and worries that Hannah could break his heart. His dad also cried while thinking about the possibility of his son getting hurt in this process. They don't want him to hold back, they want Peter to go for the person that will make him happy. You can't help but love his family. As Peter said goodbye to Hannah he told her that he's "falling so hard for her," but he fell short of actually dropping the L-word.

Tyler's Hometown Date
Hannah met up with Tyler at a lighthouse in Jupiter, Florida. He rented a boat and he promised her he's better at driving a boat than riding a horse and Hannah said, "Praise the Lord!" They got quite a bit handsy with the sunscreen on the boat. He drove her all around Jupiter and then they took a swim where things got very passionate. They talked about his dad and his health struggles, and then danced to a band on the beach.

We think you got it, @AlabamaHannah 😉 #TheBachelorette pic.twitter.com/gIyYk3JWmm

Hannah met Tyler's mom, dad, brothers and some of his extended family. Tyler is so much like his dad! They have the same mannerisms and way of speaking. His father struggles with his vocal cord still so that's why he sounds raspy. Tyler told his dad he's taking this process with Hannah very seriously because he wants his dad to meet his future wife and children. His brothers told Hannah how amazing Tyler was for their entire family when their dad was sick. They did their best to assure her that Tyler is ready for a big commitment. Before Hannah left his house, they made out in the car and it was steamy! He didn't say, "I love you" to her yet either.

Luke's Hometown Date
What makes Luke the way he is? That is the question Hannah hoped to answer on her visit to Gainesville, Georgia. He decided to take her to meet with his church group and he gave his testimony about his sex chasing in college and about how he was entangled in sin. We heard the story again about how God spoke to him in the shower. Hannah seemed to look as though she never heard it before and was in awe. Amazingly, Luke's friends said how much they like him and how nice he is to everyone. Hannah was relieved that others could see the good in Luke, too.

Explaining Luke P. to his family like... 😬😂#TheBachelorette @AlabamaHannah pic.twitter.com/Z9v9PwhDKO

Hannah met Luke's father, mother, brother, sister-in-law (also named Hannah) and his grandmother and great-grandmother. It was a big crew of family! Hannah hilariously told Luke's family that none of the other guys like him. She even told his family that she wasn't always on his side in their disagreements. The look on their faces seemed to say that they had hoped Hannah would have their son's back, but she admitted she didn't. Luke's dad was shocked at hearing how his son struggled with the other guys. But, once Luke talked about his and Hannah's spiritual connection and how she was worth the effort, his dad told Luke to thank the Lord. His brother also did his best to reassure Hannah that Luke can be the man she's looking for and that he has all the qualities that she says she wants. Luke even told his mother that he flat out loves Hannah. His mom cried when she heard him say that. Before Hannah left, he told her that he's sorry again for their past troubles, told her that when he looks at her he sees his future wife, and "without a doubt I love you." Wow. She says she got heart flutters and it felt good when he said those words to her.

Jed's Hometown Date
Lastly, Hannah headed to Knoxville, Tennessee to visit Jed's family. Their first stop was a recording studio. He challenged Hannah to write a song with him. They jotted down their favorite moments together to use as lyrics in their song. It came out very cute! At the end of the song he told her, "I love you, I can feel it." Then he cried into her shoulder as they hugged.

How'd she do, @carrieunderwood?🎶 #TheBachelorette pic.twitter.com/9E84U5DYjP

Hannah met Jed's father, mother, sister, and grandparents. They told his family about their first one-on-one date. "She looks like she's a hoot," Jed's dad said. Ha! He still is concerned that it's such a fast journey that Jed might not be ready to get engaged. Jed assured him that he was and that he and Hannah have an amazing connection. He also told his dad that Hannah is super supportive of his career. His mom asked her if she tells all the guys she's falling for them, and Hannah said, "Actually no, I haven't said it to anyone else." Jed's mother said that her son has a different path for his life right now because of his music career, and she added that he's not the type of guy to have a full-time job because he has to create time for his music. His mother told Jed that the whole situation doesn't feel very realistic to her. Jed said that Hannah is along for the ride as far as his music career goes, so that seemed to calm her fears...a bit. Hannah said that she didn't get the validation she had hoped for from his family. She was upset that her concerns about Jed not being ready to be married are valid.

Rose Ceremony
Hannah told Chris Harrison that she felt like all the men were neck and neck. She couldn't pinpoint anyone to eliminate. Hannah felt that eliminating someone was an impossible task. She said she planned to wing it and see what happens. Three roses sat on the table. She handed out roses to Peter and Tyler and then freaked out over the last one and left the room. Hannah told Chris Harrison that she needed more time to decide. She didn't want to make a rash decision. Eventually, Hannah came back out and Chris Harrison gave her two roses. She kept all four! Jed seemed slightly relieved and a lot annoyed because that meant Luke was still in the competition. He does not want it to be a toss-up between him and Luke. Still, he accepted the rose.