Nick picks his final two women on 'The Bachelor' 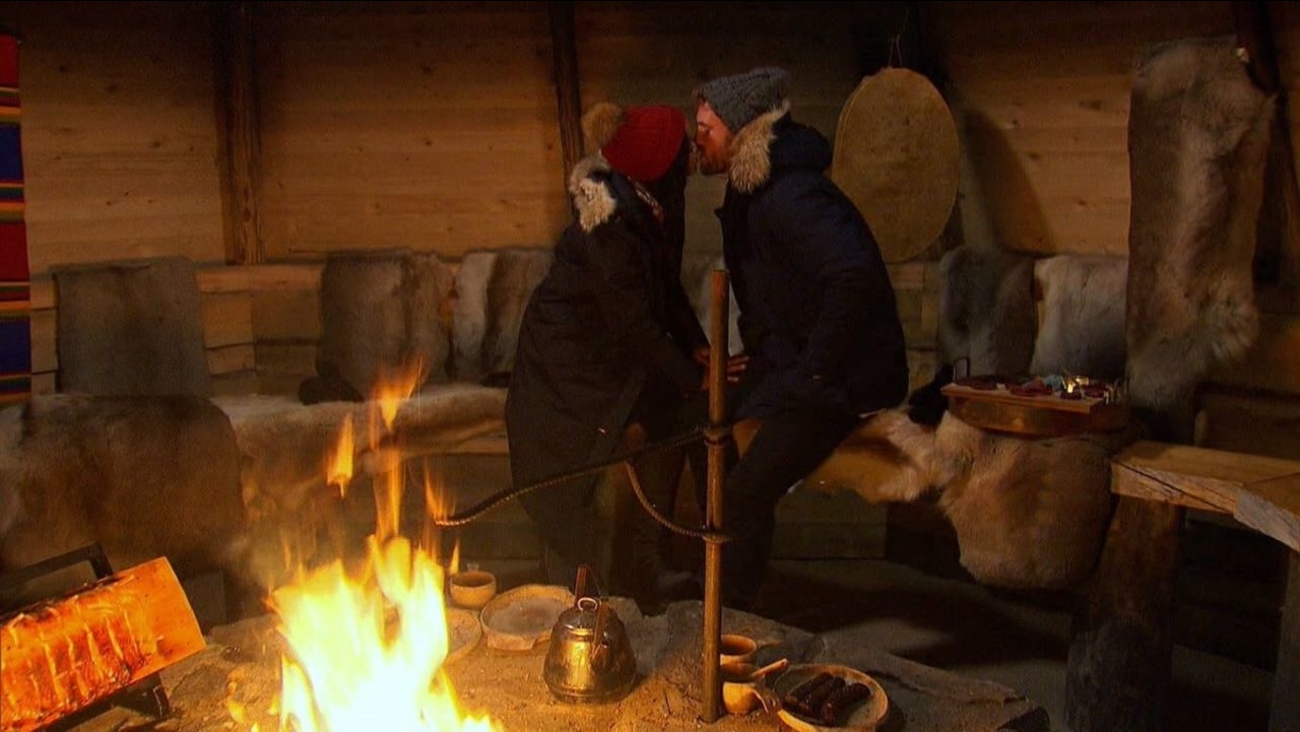 NEW YORK -- The second half of the fantasy dates in Finland picked up right where we left off last week. Raven and Nick have spent the night together and they talked about how much they meant to each other and said that it meant a lot to them. Raven said she was "pretty satisfied" and that Nick was "good at what he does." Cue the montage of Raven skipping around town a satisfied woman.

"Nick is really good at what he does, so I'm pretty satisfied today." - Raven#TheBachelor pic.twitter.com/4q0emrB4IB

Later that day, it was Rachel's turn for her fantasy date. They went cross country skiing and it was a bit of a disaster for her. She was slipping and sliding all over the place! Later, they sat by a roaring fire and talked about their feelings. Rachel told Nick that she didn't think that she would end up feeling so strongly about him. They moved on to the dinner/cocktails portion of their date. She told Nick she was ready to let her guard down thanks to him and he said that he likes strong women. She asked him if he knows where he stands with her and he said, "not exactly." She told him it's just hard for her to verbalize her feelings because she's scared of it not being reciprocated. She told Nick that she was falling in love with him, at long last! Nick kissed her and he told her that he's falling for her "100%!" Wow! That's big that he said that! He used that moment to hand her the fantasy suite card. She said that she would love to stay with him and they headed off to their room. "This is exactly the man that I am supposed to be with," Rachel said. Anyone else wondering, how could this go wrong?! We already know that she's the next "Bachelorette." The next day, Rachel and Nick woke up kissing. He got up and made her some breakfast and they seemed to have a great relaxed time together.

Lastly, Vanessa finally got her chance for her fantasy date. They met up in a snowy paradise to take an ice bath. They lowered themselves into the freezing cold water for about three seconds and then sprinted into a warm sauna. They ran back out to try it again for 10 seconds and they made it to 8 before they had to go back into the sauna. Eventually, they made it to 10, and then spent some time in a hot tub. They had a discussion about how Nick is a bit worried that her family may be too traditional and too involved in her/their life. He also said that he worries they might be too similar.


Later, they sat by a fire and Vanessa revealed that she is worried about what he was saying in their conversation earlier. Nick said that he's just wanting to make sure that they both compromise and reciprocate for each other. Vanessa asked if he would ever move to Canada and he said he's proud to be an American, but if it was for the woman he loved, he would consider it. Again, they talked about how similar they are and Nick said that it scares him a bit. Vanessa told him that she loves him and that she was excited to tell him that. Nick kissed her and offered her the fantasy suite card. They entered the room with champagne in hand and quickly got down to kissing. They woke up the next day and Vanessa again told Nick she loved him.

It was time for the rose ceremony that would determine the final two. Nick gave a speech that he cried through and told the ladies that he cares about all of them but he has to follow his heart. He gave the roses to Raven and Vanessa. Poor Rachel was left standing there looking all beautiful and poised, yet heartbroken. She told him she had no regrets and Nick told her that she was one of the most incredible women he'd met in his whole life. He's hoping it won't be a forever goodbye because he does care about her. In the limo, she kept it classy. Rachel cried, but said it was hard to hear how great she is and how much someone cares about you but yet they don't choose you. She worried she didn't show him enough of how much she cared, but she wants to find someone who has "undeniable, unconditional love" for her. Don't worry, she's going to get a great group of guys to pick from! She's going to be a wonderful "Bachelorette!"

"You’re one of the most incredible women I’ve ever met in my life.” –Nick#TheBachelor pic.twitter.com/gWzT8c8N3o


Get ready for arguing...it's time for "The Women Tell All" episode. Once the ladies were all introduced, they recapped some of the drama that happened like Liz already having "relations" with Nick at a wedding and Jasmine's epic meltdown on her group date with Nick. They also got into Corrine's antics and they went back to the live stage to all talk about the things she did that irritated them like her taking naps and taking her top off during their group date. Taylor got called out for bullying Corrine and there was just a bunch of girls talking over each other.


Liz was the first one up in the hot seat. She rehashed her time with Nick at Jade and Tanner's wedding. She admitted she wasn't over an ex and once she was, she wanted to give her relationship with Nick another chance. She said that after she left the show she was heartbroken and had a lot to deal with when she returned home to Nebraska. Liz said that she still deserves love and someone who will fight for her. She added that people don't care about what you do, but who you are. She made a lot of friends with the ladies on the show and she said after the show they were all so great to her.

"People really don't care about what you do, they care about who are." - Elizabeth 🌹#WomenTellAll #TheBachelor pic.twitter.com/sPpnIYEsZn


Taylor was up next. After watching a recap of her time on the show, she says there are definitely things she wished she didn't say. She told Corrine that she didn't understand the impact of her words towards the other girls and her. Corrine said that she didn't say anything about her until Taylor came on the attack. Corrine got up and walked off. She returned with a glass of champagne. Taylor said the show has negatively affected her career and no one has any empathy towards her. There was a lot of cursing and then Taylor asked Corrine for an apology. Corrine told her to get over it and that she wouldn't apologize.

Corrine moved into the hot seat. After watching her footage back she said she did what she had to do to get Nick's attention. She said she did come off more promiscuous than she had intended though. As for the naps she said, "everybody naps just like everybody poops!" It was hilarious! Corrine said that she never did anything malicious against anyone. She talked a lot about how she was offended by Taylor's judgments. Corrine and Taylor agreed to disagree. Then oddly enough she gave everyone her favorite "cheese pasta."


Kristina talked about her time on the show and eventual breakup with Nick. She cried a bit seeing herself be so vulnerable and even Chris Harrison was getting emotional about it! She told Chris Harrison that she would have probably have had to go into prostitution had she stayed in Russia. She's so thankful for her family in America. Liz butted in and told Kristina how strong and amazing she is and how privileged everyone in America is.


Nick finally came out to face the women he's let go. He's been a part of the "After the Final Rose" specials but never a "Tell All" so this was new for him! He gave Kristina some closure and then Danielle L. started crying and asked him what happened. It basically all comes down to him having stronger feelings for other people. He said, "hey I know what it's like to go all the way and not get picked."

Rachel came out to a huge round of applause and cheers as the new "Bachelorette!" She told Chris Harrison that she loves great smiles, funny guys, secure, confident, and most importantly someone who wants to get married and start a family. Chris Harrison mentioned how she is the first black "Bachelorette" or "Bachelor" and she started laughing about the shark in the audience, but eventually said she is very honored to represent an African American woman in this position. She said she doesn't want it to be the focus of her journey, but she's happy to acknowledge it.

Nick walked on the stage to congratulate Rachel. He said he couldn't imagine anyone better for the job. She said she learned a lot about what she wants out of life because of her experience dating Nick. It's going to be a great season!