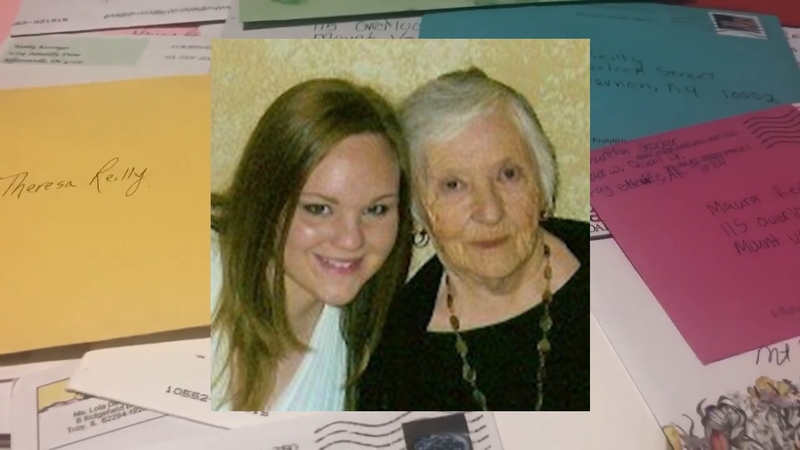 MOUNT VERNON, Westchester County (WABC) -- A Mount Vernon woman never imagined her request on social media for 99 birthday cards for 99 years to help celebrate her grandmother's 99th birthday on September 22 would get so much attention.

Maura Reilly put the call out on Facebook on August 29, thinking members of the Daughters of the American Revolution -- a volunteer women's organization dedicated to serving active duty military personnel and veterans, with which she is involved -- might send cards.

"It started small and kind of just snowballed from there," she said. "I am just blown away by the reception. This has been more than I could ever dream of."

She immediately began receiving birthday cards from almost every state and from as far away as the UK, Ethiopia and Australia.
EMBED More News Videos

Danielle Leigh interviews a woman from Mount Vernon after her request for 99 cards for her grandmother's 99th birthday received wodespread attention.

Related: Girl gives back to police K9s instead of receiving birthday gifts

Reilly has until her grandmother's party on September 19 to continue collecting cards, and even though she has already surpassed her goal, she isn't giving up on collecting more.

"I can't wait to see how many I get in the next nine days," Reilly said.

The soon-to-be-99-year-old served at Pearl Harbor as a lieutenant and nurse in the Navy during World War II, according to Reilly.

She also obtained a master's degree in Public Health from New York University after the war.

A good number of people around the world agreed with Reilly and sent cards, causing this effort meant to benefit her grandmother to touch Reilly as well.

"I think it especially in a time like COVID and generally where the feeling of community and country are at an all-time low, it helps to reaffirm my faith in community," she said.

Reilly said this year's party will be different than parties past. Rather than a restaurant, they'll celebrate in a backyard, wearing masks and social distancing, but she's confident these cards will make the day extra special for her grandmother, who has no idea about the birthday card surprise.

"She knows we are having a family party," Reilly said. "She is not aware of the scheming all of us have done behind her back. I can't wait to read her some of the cards and to show her the feelings people in other parts of the country have of thanks and gratitude for her service."