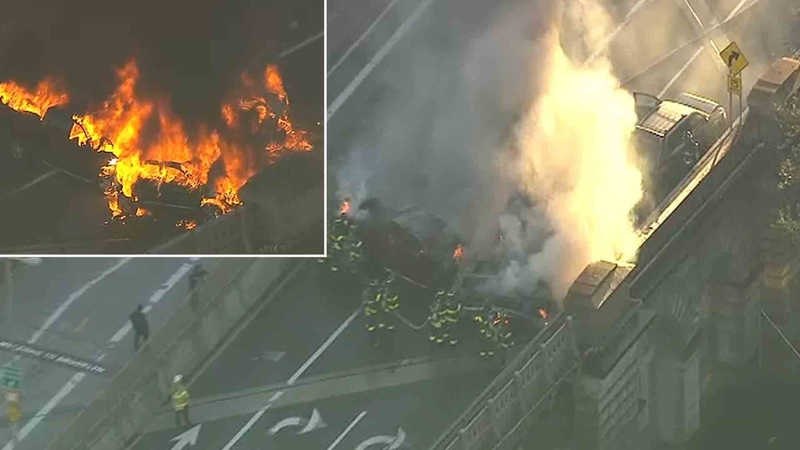 NEW YORK (WABC) -- One person was killed and five others injured in a fiery crash on the Brooklyn Bridge Wednesday morning.

Four cars crashed on the Brooklyn-bound side just after 7 a.m., sparking a fire that engulfed three of the vehicles and cut off a key New York City artery at the start of the morning commuting rush on one of the busiest travel days of the year.

RAW VIDEO: NewsCopter7 was over the crash Wednesday morning.

Motorists blocked by the wreck got out of their cars to watch a swarm of firefighters extinguish the blaze.

Nathaniel Gonzalez and his wife were taking wedding photos, just one day after their marriage.

"We were just on the bridge, and all we kept hearing was bang, bang, bang," he said. "And we look over, and the photographer wouldn't let us look at what was going on. Finally, I ran over to the edge over here at the end, and I just saw a huge fire blazing out of control."

NewsCopter7 and cell phone video captured the fireball, the FDNY response and the ensuing investigation. There is no word on what led to the crash and fire.

#FDNY members are operating on scene of multiple vehicles on fire on the Brooklyn Bridge. There is one civilian fatality reported. The fire has been knocked down. pic.twitter.com/cPG5WVGazA

Police identified the victim who died as Kristopher Hambas, 32, of Scarsdale

A couple from Australia walked across the bridge to see the sunrise, but instead, they saw something disturbing and tragic.

"We were midway through the bridge, and then I saw the smoke," Alex Verth said. "I wasn't too sure what it was, and I started walking towards and saw the fire."

The entire bridge was closed to traffic for about an hour and major traffic tie-ups continued to spill onto surrounding roads even as it reopened, beginning with the Manhattan-bound lanes.

Photographs showed the charred hulks of three vehicles and a fourth a few feet away with body damage.

The wreck happened on a portion of the bridge over land on the Brooklyn side of the East River, near where drivers turn on to exit ramps and surface roads.

The fire was also a few feet from a spot where throngs of tourists enter the bridge's pedestrian and cycling path.