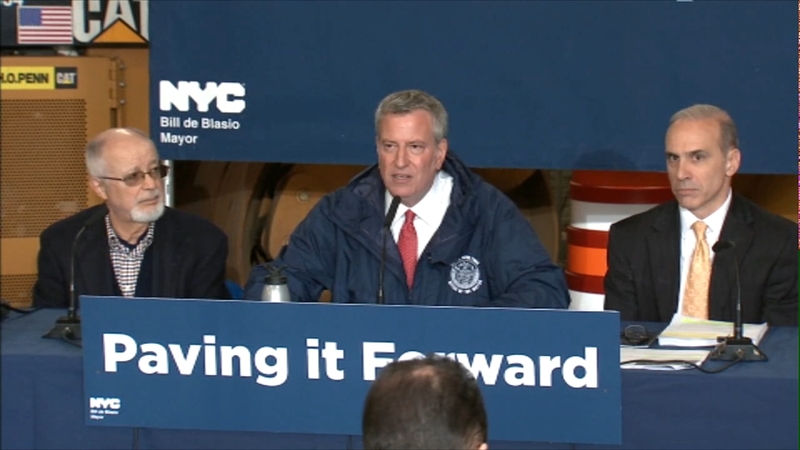 MANHATTAN, New York City (WABC) -- Mayor Bill de Blasio announced that thanks to a 10-year investment of $1.6 billion in street repaving, New York City had this week paved its 5,000th lane-mile since 2014.

That's more than a quarter of the 19,000 total lane-miles citywide, long enough for a road to Las Vegas and back. The increased repaving has driven down potholes 44 percent.

The mayor made the announcement while visiting a Department of Transportation yard on Staten Island, where 42 percent of roadways have been resurfaced in the last four years. De Blasio also announced several investments and innovations coming to DOT's paving efforts, according to a press release:


DOT indicated major streets in every borough that will be repaved in the last six weeks of the current fiscal year that ends on June 30, including:

So far in FY18, crews have resurfaced over 1,000 lane-miles. It is the highest three-year output of paved lane-miles in DOT's recorded history.

DOT both procures and produces asphalt at its two plants for resurfacing and filling potholes. In 2017, DOT used nearly 1.3 million tons of asphalt.

For information about DOT's ongoing work to address potholes and maintain the City's road network, please visit NYC.gov/DOT. Pothole conditions should be reported immediately to The Daily Pothole or to 311.