WABC
MOUNT HOPE, Bronx (WABC) -- Three people were killed and five others injured, three seriously, in a multi-vehicle chain-reaction crash on the Cross Bronx Expressway in the Bronx Tuesday morning.

The accident happened at about 5:45 a.m. in the northbound lanes at Webster Avenue and involved two tractor-trailers, a car, and a pickup truck. Police say it began when traffic forced on one of the trucks to stop in the middle lane of the highway.

"A Ford pickup truck stopped immediately behind that 18-wheeler," NYPD Highway Inspector Steven D'Ulisse said. "There was a second 18-wheeler traveling in the same direction, failed to negotiate the stop and caused a chain-reaction collision, hitting both the Ford pickup truck and also a Toyota Corolla."

The Corolla ended up on the center divider of the highway, and the pickup truck was wedged under the second tractor-trailer, D'Ulisse said. 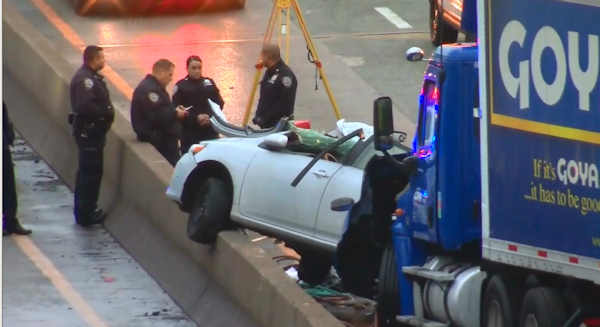 Three of the five people inside the pickup truck were pronounced dead at the scene. Two were identified as 51-year-old Henry Walker, of Livingston, New Jersey, and 21-eyar-old Khalil Walker, of Tobbyhanna, Pennsylvania. The identity of a 58-year-old man is pending family notification. The two others were taken to St. Barnabas Hospital in serious condition.

The driver of the Toyota was also seriously hurt, while two occupants of the second tractor-trailer suffered non life-threatening injuries.

The wreck scattered debris across the three eastbound lanes of the Cross Bronx Expressway and over the median.

Police are investigating the cause of the accident. All the drivers had clean driving records and licenses, D'Ulisse said, and there was no evidence of alcohol with both tractor-trailer drivers.

"We don't know at this point, that's part of our investigation," he said. "We do a complete analysis of the scene itself, and we have to do a lot of interviews. And based on the interviews and mechanicals of the vehicles, we will be able to determine at a later date."

The crash closed the eastbound lanes for the morning commute, causing major backups at the inbound George Washington Bridge. 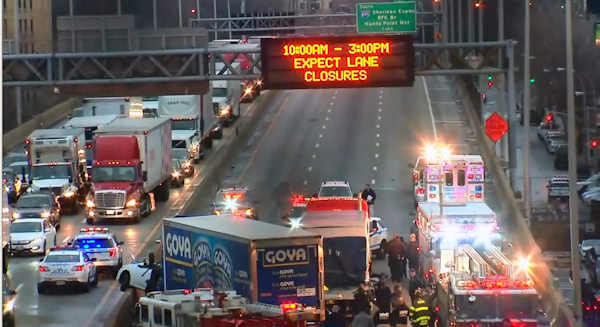 Another accident was reported Tuesday morning on the Cross Bronx at the Sheridan Expressway.