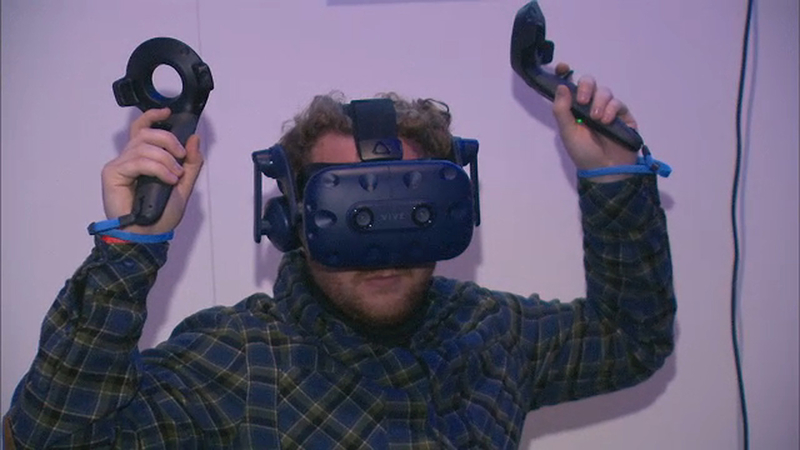 TRIBECA, Manhattan (WABC) -- Virtual Reality - also known as VR - is in one in five American homes right now, and the industry is poised to explode in the next few years. At April's Tribeca Film Festival, VR's potential was on full display in an interactive exhibit called "Tribeca Immersive."

"As hardware becomes less expensive and the barriers to entry are lower, more people will have an opportunity to really engage with this work," said Loren Hammonds, the programmer in charge.

In the exhibit, one can visit Africa without ever leaving home, go swimming with sharks, or attend a dinner party where aliens are expected.

"We're experiencing the reality in a way that's very different than TV or movies," said Jim Steyer, of tech non-profit Common Sense Media. "You're surrounded by the effects, and you feel like you're part of the story."
Steyer recently commissioned and released the first study of virtual reality's impact on kids.

"The key is, will the technology develop in a positive, good way for society?" he said. "Or will it be used for not such good things?"

At the exhibit, the emphasis is on the positive.

"(VR) can be a call to action, in that you have the opportunity to have a first-person experience as someone other than yourself," Hammonds said.

Part of Tribeca Immersive is "1000 Cut Journey, which aims to promote tolerance by using VR to let people experience racism they might not be subjected to in their daily lives.

"When I put on the headset, even though I'm a white person, I can feel what it's like to be a black person and be racially discriminated against," Steyer said. "That's a very powerful experience."

And it is one we saw first hand, watching a man try out the display with Hammonds.

"Right now, he's embodying a black teenager who is going about his day," Hammonds said. "And he's unfortunately about to be a victim of police aggression."

And in peril, it would seem, the promise of virtual reality can be found.

Experts say the technology is getting much better. Less cumbersome headsets will soon be available, and the screens will be brighter with better resolution.

It is no wonder the value of the global virtual reality industry doubled just within the last year.