Remember the fallen: Troops who died in 2017 fighting for our country 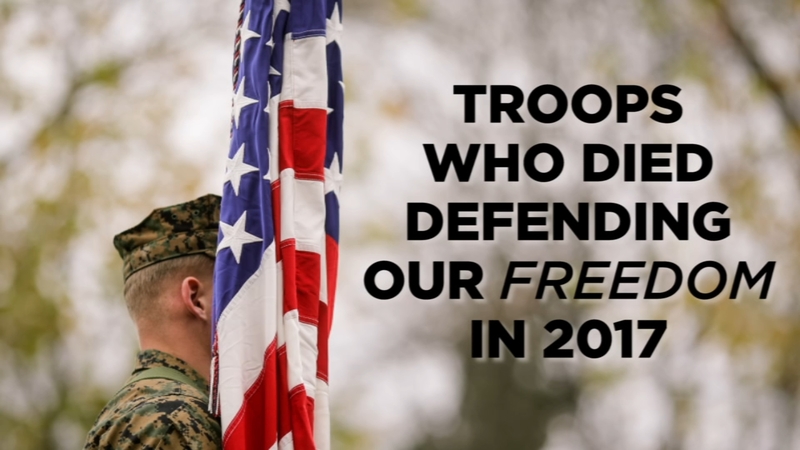 Remembering troops who died in the line of duty in 2017

As 2017 comes to a close, but let's not forget the troops who died in the line of duty while fighting for our country overseas. Please take the time to honor a few of the fallen who made the ultimate sacrifice to defend our freedom.

January 29: Navy SEAL William "Ryan" Owens was killed in a raid on an al-Qaeda-linked group in Yemen.

April 27: Sgt. Joshua P. Rodgers and Sgt. Cameron H. Thomas were killed during a raid on an ISIS compound in Afghanistan.

April 27: 1st Lt. Weston Lee was killed when an IED detonated during a patrol in Iraq.

July 3: Pfc. Hansen B. Kirkpatrick died of wounds received during an indirect fire attack in Afghanistan.

August 2: Sgt. Jonathon M. Hunter and Spc. Christopher M. Harris died when an IED exploded near their convoy in Afghanistan.

October 1: Army Spc. Alexander Missildine died when an IED exploded near his vehicle in Iraq.

*Note* It's impossible to feature every member of our troops who died while deployed, but you're encouraged to send us a picture or a message about a loved one using #abc7NY on Facebook, Twitter or Instagram.