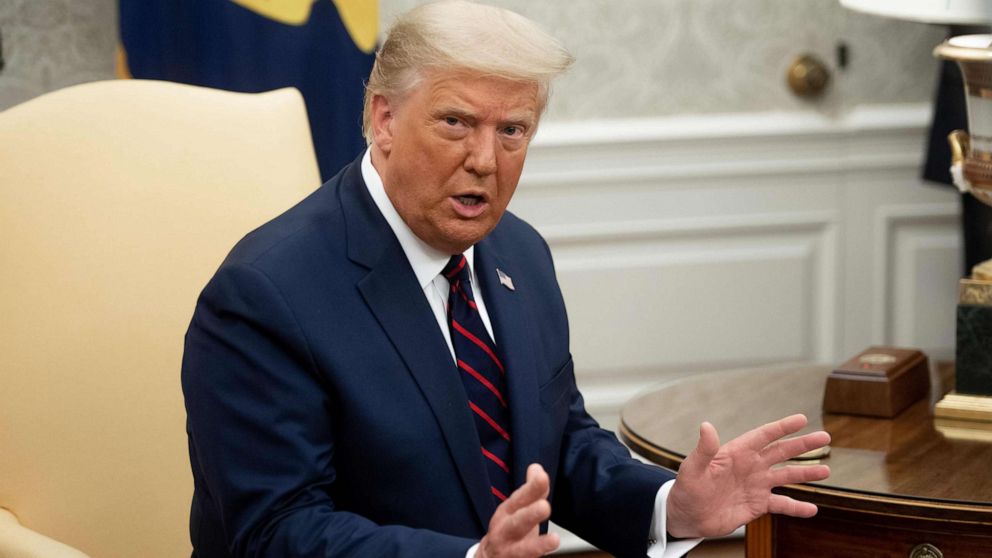 President Donald Trump headed to the 2020 battleground state of Pennsylvania Thursday afternoon to make a campaign speech in the town of Old Forge, just a few miles from former Vice President Joe Biden's childhood home in Scranton -- and just hours before Biden makes his own speech accepting his party's nomination for president in his adopted home state of Delaware.

Speaking outside an office building to a crowd of supporters, Trump used apocalyptic imagery to paint what he said Biden's America would look like and deemed him "no friend of Pennsylvania -- he is your worst nightmare."

"If you want a vision of your life under Biden presidency, think of the smoldering ruins in Minneapolis, the violent anarchy of Portland, the bloodstained sidewalks of Chicago, and imagine the mayhem coming to your town, and every single town in America," Trump said Thursday afternoon.

"So, tonight, we have ... Slow Joe will speak at the Democrat convention. And I'm sure that he will just knock them dead," he continued. "And he will remind us that he was born in Scranton, but you know, he left like 70 years ago, right? He left a long time ago."

Though Trump says Biden "abandoned" the state, Biden says his family left Scranton when he was 10 years old because his father unable to find steady work.

Making the trek to Pennsylvania for the sole purpose of slamming Biden, Trump addressed his imminent acceptance speech once more near the end of his own remarks, claiming he hoped he does well -- but not too well.

The president also took aim at the record of Biden's running mate, Sen. Kamala Harris, who on Wednesday became the first Black woman and first Asian American to be nominated for national office by a major political party.

"Joe Biden and Kamala -- she's another beauty -- also strongly support the deadly sanctuary cities that have been so bad for you and everyone else. This district attorney in San Francisco put a drug dealing illegal alien into a job and jobs program instead of into prison," Trump said. "We believe our country should be sanctuary for law-abiding Americans, not for criminal aliens."

Trump continued a baseless line of attack on former President Barack Obama after the former president cast his successor as a looming threat to American democracy at Wednesday's Democratic National Convention.

"I watched President Obama last night. And I watched him talking about everything, and I had to put it out. I said, 'Yeah, but he spied on our campaign and he got caught.' You know, that is about as bad of a thing as you can imagine," Trump said, repeating a baseless conspiracy theory stemming from the FBI's surveillance of 2016 Trump campaign associates.

In addition to trying to steal the spotlight from Biden's acceptance speech, Trump is scheduled to do a live interview with Fox News' Sean Hannity at the same time the DNC's program is set to begin Thursday night.

His fiery afternoon speech comes after three nights of tuning into the Democrats' program and amid continued swipes at his critics including the late Republican Sen. John McCain, knocking him in a tweet Thursday morning.

"McCain was a lousy candidate with lots of bad policy, but the 'deadheads' sabotaged his campaign from the inside, and never gave him a chance to win. Hope they were happy with OBiden, who gave you me!" Trump tweeted, responding to a Fox News interview with McCain's running mate, former Alaska Gov. Sarah Palin.

McCain's widow, Cindy McCain, appeared at the DNC Tuesday to discuss the friendship between her late husband and Biden.

Trump aired his grievances with the Wednesday's speeches in real time -- in all caps -- on Twitter.

Less than 10 minutes into Obama's speech, Trump fired off as the former president told Americans in primetime that there's no indication Trump's behavior will change.

"For close to four years now, he's shown no interest in putting in the work, no interest in finding common ground, no interest in using the awesome power of his office to help anyone but himself and his friends, no interest in treating the presidency as anything but one more reality show that he can use to get the attention he craves," Obama said in a forceful rebuke from Philadelphia. "This administration has shown it will tear our democracy down if that's what it takes to win."

It's not lost on some that in sending the tweets he may have reinforced Obama's argument.

"HE SPIED ON MY CAMPAIGN, AND GOT CAUGHT!" Trump said of Obama, reigniting a debunked conspiracy theory.

Trump then attempted to sow doubt in Obama's faith in Biden, questioning why the former president didn't endorse his vice president sooner -- though it's customary for former presidents not to endorse candidates during competitive primaries.

He weighed in again in real time as Harris formally accepted the vice presidential nomination.

After Harris said, "I know a predator when I see one," alluding to Trump and her prosecutorial background, Trump attempted to revive tensions between Harris and Biden from the primary trail.

Notably, Harris specifically said when she pushed Biden about busing on the debate stage that she did not view him as a racist.