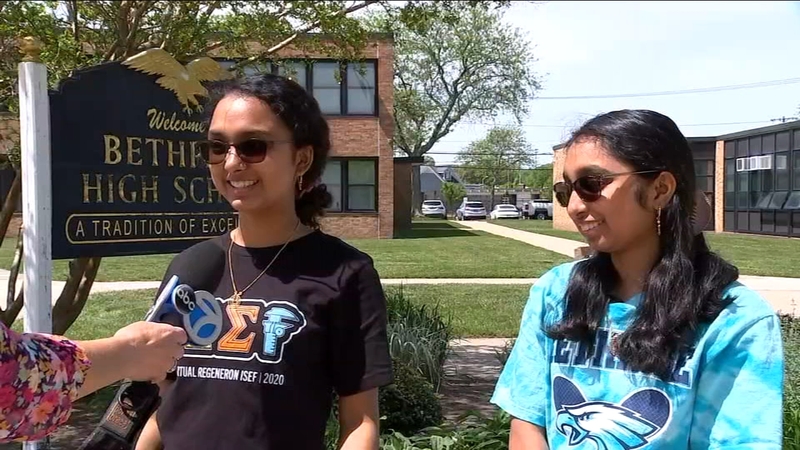 2 sets of twins graduate high school as valedictorian and salutatorian

NASSAU COUNTY, Long Island (WABC) -- They say twins have a special connection and for these twins there's no doubt.

"Super excited of course. It's a great honor to be named 'Val' and 'Sal" together," said Bethpage High School graduate Suchitha Channapatna.

Valedictorian that is - for Suchitha Channapatna, and her fraternal twin, Ruchitha - who's salutatorian for the graduating class.

But this is not the only set of twins leading their class on Long Island.

Not far away, at Hicksville High School, we meet Sam, and Sean Zhen - identical twins who are also valedictorian and salutatorian of their senior class.

"You're left handed, I'm right handed. That's like almost the only thing," Sam Zhen said of the differences between the two.

Both Sam and Sean were part of their high school's robotics club.

And the Channapatna twins also participated in robotics where they've run into the Zhen twins at competitions.

Taylor Swift received an honorary degree from New York University on Wednesday and delivered a commencement address to the Class of 2022. Kemberly Richardson has the details.

Suchitha and Ruchitha also play the flute, and pursue similar science research, but there are a few differences between these two sisters.

"She like wakes up earlier and is more disciplined about stuff," Ruchitha Channapatna said of her sister.

One thing in common between both sets of twins is that they are the children of immigrants.

"My parents really didn't really like, force themselves really into our academics," Sean Zhen said.

And a memo to all the helicopter parents sometimes its best to let your kids work through their homework without the extra prodding.

"We talk about leading from behind," Williams said. "That's how I would sum up the parents."

Sam and Sean are headed to Cornell and will room together, while Suchitha and Ruchitha are off to MIT where they will live apart.

All four twins have similar ambitions leaning toward biomedical, mechanical or aerospace engineering.

Scott Williams has been counting and re-counting his blessings - three blessings to be exact.