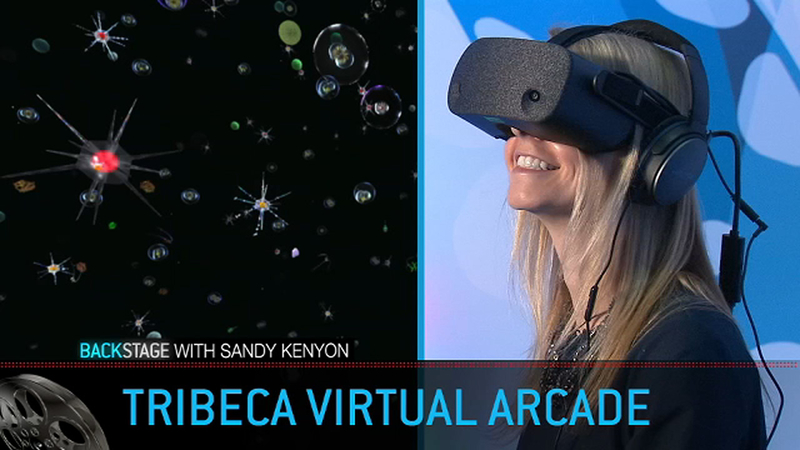 Backstage with Sandy Kenyon: VR at the Tribeca Film Fest

LOWER MANHATTAN, New York City (WABC) -- Its name may be the Tribeca Film Festival, but virtual reality has become a vital part of the event.

And this year, from the weird to the wondrous, you'll find it in the Virtual Arcade.

"That's the magic of virutal reality, you feel like you're there," writer/director/animator Eric Darnell said. "You have all your senses just overwhelmed with this alternate place, and it's magical."

Darnell wrote and directed the "Madagascar" movies, but now, he works full time in virtual reality.

"And that's what's so cool about VR right now," he said. "Nobody knows what they're doing. It's a brand new medium. It's not just an extension of film. It's its own thing, and there's an entire language to discover. And so I feel like a kid again."

"VR is always changing and evolving, even since last year's festival, we have really expanded," he said. "Something like 'Drop in the Ocean,' for example, it's about ocean conservation. But the way that you experience it is through other participants. So that's already combatting the idea of VR being isolating."

"Drop in the Ocean" is produced by Conservation International and hopes to bring a new perspective to a global problem.

"The meaning of this experience to really feel the impact of human pollution on the ocean," said Julie King, director of technology at the Buckley School. "There's a good chance you might have contributed at some point in your life to that debris. I know that I will be even more thoughtful about recycling and thinking about where that's going to end up."

The idea is to get people to think before they throw away, using a new approach -- and a new technology.

"The power of it being immersive does add another level," King said. "It takes a third-person story and it makes it first person. You are in it, and you're feeling these things. Being able to drop deeply into an immersive story adds a whole different level."

The Virtual Arcade is open though the weekend at the Tribeca Film Festival, but you must get tickets online.

To find out how, visit TribecaFilm.com/immersive#arcade.