7 On Your Side: New Jersey dealership debacle for car buyers 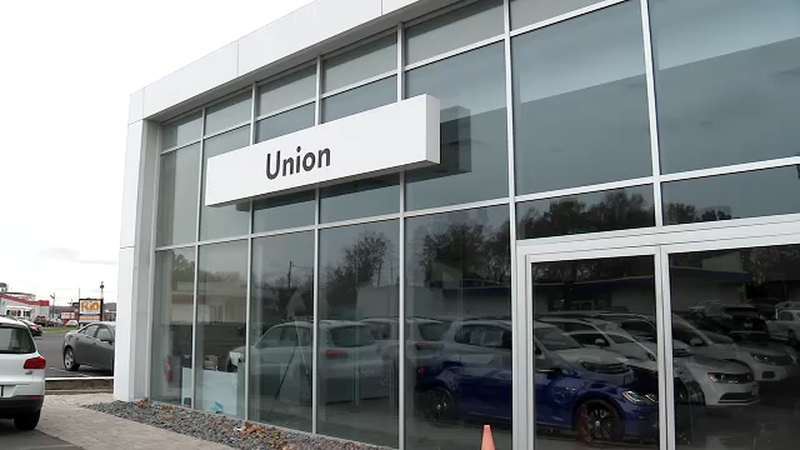 7 On Your Side: New Jersey dealership debacle for car buyers

UNION, New Jersey (WABC) -- It's simply one of the biggest dealership debacles we've ever seen -- It started about two weeks ago when a local dealership suddenly closed its doors.

It left behind scores of angry customers with expiring temporary license plates and five-figure bills for unpaid trade-ins.

Tina Kaiser and Emily Bakerman are both stuck on the hook for tens of thousands of dollars for cars they no longer own.

She's an expecting mom with two little ones at home, and back in September, she and her husband bought a new Atlas at Volkswagen of Union and traded in her Dodge Durango.

She did what's called a "rollover loan," where the dealership pays off the remaining financing on the trade in -- in this case $26,804 -- rolling it into financing her new VW.

The dealership was supposed to pay off the financing deal immediately, but instead of paying, the dealership defaulted.

Bakerman traded in a Jeep Grand Cherokee, rolling over her lease into a deal for a new Tiguan. She's on the hook for $24,936. But when she calls the dealer?

Doors were locked at Volkswagen of Union, and the dealership's deserted. So where are their cars?

We researched the vehicle identification numbers and found Bakerman's Jeep Grand Cherokee for sale for $28,000 on Volkswagen of Union's website. Then we found Kaiser's Dodge Durango nearly 900 miles away outside Milwaukee at a Subaru dealership in Waukesha, Wisconsin. After our call, the dealership took the listing down.

Volkswagen of Union also left customers in the lurch whose cars were brought in for service week ago. Kariona Lam left her VW Bug about two weeks ago for service. and she says she hadn't been able to get it back.

We learned Carmine DeMaio ran Volkswagen of Union until recently. Other dealerships he ran included Norman Gale Buick, which also shutdown suddenly; and Lexus of Englewood, which filed for bankruptcy in October.

We tracked him down at Infiniti of Englewood.

He wasn't in when we visited, but after we left and made repeated calls, a dealership employee gave Lam her Beetle back.

As for the missing trade-ins? We contacted Kaiser and Bakerman's finance company, and after our calls, it agreed to discontinue collecting the combined debt of $51,740.88.

Volkswagen of America told us it's working with impacted customers who have financed vehicles with Volkswagen Credit, putting them in "protective status" to avoid collections. They also gave Kaiser and Bakerman two free months from financing.

DeMaio told us he's working with VW to help customers, but he's run into financial problems.

As for the permanent plate problem, after our calls, the New Jersey Motor Vehicle Commission stepped up and is issuing new temp plates.

For help getting permanent plates through New Jersey Motor Vehicle Commission Business Licensing Services Bureau, call (609) 984-1122. If you send in proof of purchase and insurance, they will express mail out temp plates.

VW of America issued a statement, saying any customers having issues related to this matter should contact VW's Customer CARE team at (800) 822-8987. They will have a dedicated team working to assist these customers.

Email 7OnYourSideNina@abc.com, or contact Nina on her Facebook page or tweet her at Twitter @7OnYourSideNY! You can also call the 7 On Your Side Hotline at 917-260-7697 or fill out the form below.
Report a correction or typo
Related topics:
shoppingunioncars7 on your side
Copyright © 2022 WABC-TV. All Rights Reserved.
TOP STORIES
Suspect paced Q train before fatally shooting man unprovoked: police
3 people killed in crash near catering hall on Long Island
Celebrate Israel Parade to kick off in NYC with heightened security
AccuWeather Alert: Still steamy
Buffalo mass shooting victims laid to rest one week after tragedy
Heat Advisory issued ahead of possible record-breaking temperatures
78,000 pounds of infant formula arrives in US
Show More
NJ police impose curfew after large party gets out of hand
Suspect breaks into NYC apartment, stabs man to death
Empire State Building lit to honor Notorious B.I.G.'s 50th birthday
Fate of 2,500 Ukrainian POWs from steel plant stirs concern
Biden pushes economic, security aims as he ends South Korea visit
More TOP STORIES News